A four-year-old boy lost his life in a fire while trying to save his little sister from being burned alive.

But unfortunately, the girl, one, was also killed by the fire in Managua, Nicaragua, which ignited when a tablet got hot and burst into flames on Wednesday.

His father, Marvin Obando, 24, was unable to open the door to the children’s room and was forced to dismantle the zinc roof in order to enter.

When he finally entered, he found the boy, Jordan Caleb Obando Soto, lying on his sister, Alessandra Adelaid Obando, and hugging her tightly. 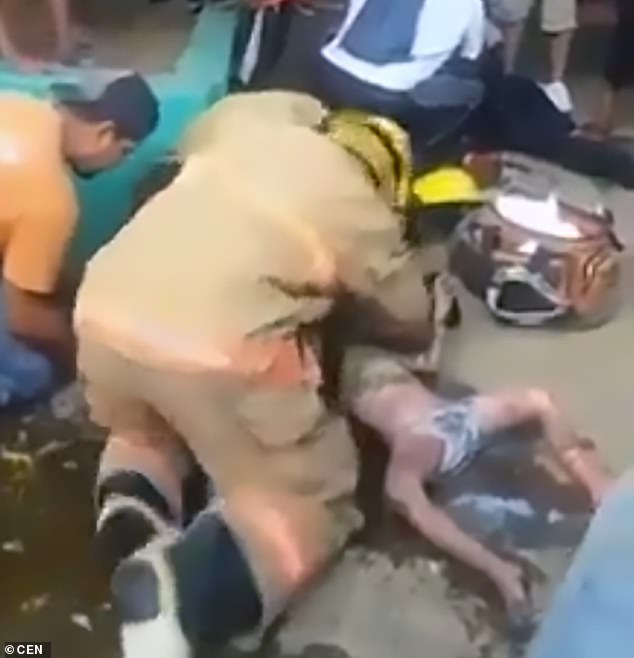 Both children were picked up and rescued through the roof before being transferred to Antonio Lenin Fonseca Hospital.

Filled with pain, Mr. Obando burst into tears when he told reporters: ‘The boy was covering his sister when I entered to save my children. The boy was hugging this girl, he had overcome her.

‘He threw himself on her because he knew something was going to happen. He protected her. He only survived three hours, my Jordan.

The children’s mother, Marbely Soto Castillo, 21, was working when the fire started at the family’s home in the Julio Buitrago neighborhood of the capital.

According to the Directorate General of Firefighters, a team of firefighters came to the place but the children had already been taken out of the burning room.

The children’s funeral was very busy after his death shocked the country.

The NBA legend, Kobe Bryant, died Sunday when a helicopter in which he was traveling crashed and burst into flames in a thick fog, killing the nine people on board, including his teenage daughter, and plunging the world of sports into mourning

Bryant, 41, was traveling with his 13-year-old daughter Gianna and seven other passengers and crew when his Sikorsky S-76 helicopter crashed into a steep slope in Calabasas, west of Los Angeles. There were no survivors.

Bryant, five-time NBA champion and twice Olympic gold medalist, is widely regarded as one of the best basketball players in history, an iconic figure who became one of the faces of his sport during a brilliant career two decades with the Los Lakers of Los Angeles.

Dozens of firefighters and paramedics fought on steep terrain to reach the burning remains at the scene of the accident, but found no survivors, authorities said.

The National Transportation Safety Board said a team of 18 investigators would be sent to California to investigate the causes of the accident.

“The Laker Nation, the basketball game and our city, will never be the same without Kobe,” former Los Angeles star Lakers Magic Johnson wrote on Twitter.

Chicago Bulls legend Michael Jordan said Bryant was “like a little brother” to him.

“Words cannot describe the pain I am feeling,” Jordan said. “We used to talk often and I will miss those conversations a lot.”

Tributes to Bryant flooded with former US presidents. UU., Pop stars and athletes of different sports, a sign of how the man known as the “Black Mamba” had transcended basketball.

“Kobe was a legend on the court and was just beginning in what would have been such a significant second act,” former US President Barack Obama wrote on Twitter.

At the Staples Center in downtown Los Angeles, several hundred shocked fans gathered to pay tribute as the place that witnessed many of the highlights of Bryant’s career at the Grammy Awards in the music industry.

“This guy is everything to me, man. It makes no sense, “said Bobby Jiménez, an anguished Lakers fan, sobbing while he was out of the place.

The Grammys set off with a somber tribute to singer Alicia Keys.

“To be honest, we are all feeling a crazy sadness right now,” Keys told the audience. “Los Angeles, the United States and the whole world lost a hero. And we are literally standing here with a broken heart in the house that Kobe Bryant built. “

Throughout the NBA, tributes were held in several of the eight games scheduled for Sunday.

Denver Nuggets fans began singing “Kobe, Kobe” while keeping a minute of silence before their game against the Houston Rockets.

In New York, Madison Square Garden lit up with the purple and gold colors of the Lakers, along with a giant image of Bryant titled: “Kobe Bryant, 1978-2020”.

The clash came just hours after Bryant was overtaken by current Lakers star LeBron James for third place on the NBA score list in a game Saturday in Philadelphia.

“Continue advancing the game @KingJames,” Bryant wrote. “Much respect to my brother # 33644”.

Bryant was a five-time NBA champion in a career that began in 1996 directly from high school and lasted until his retirement in 2016.

He was also twice an Olympic gold medalist, helping the American NBA star team win titles in 2008 in Beijing and 2012 in London.

Bryant retired from the NBA in 2016, scoring 60 points in his last appearance before his fans at the Staples Center.

It was a farewell of a fairy tale to a sports career that had begun two decades earlier.

Son of former NBA player Joe “Jellybean” Bryant, the Lakers legend was born in Philadelphia in 1978 while his father played for the 76ers.

Elder Bryant played from 1984 to 1991 in Italy, giving young Kobe a worldview of the world while growing up dreaming of following his father to the NBA.

Eventually he would join the ranks of professionals at the age of 17, jumping directly to the NBA, only the sixth player and the first guard to make that leap.

At 18, Bryant became, at that time, the youngest player or starter in an NBA game and the youngest winner in the NBA Slam Dunk Contest.

With Bryant paired with Shaquille O’Neal, the Lakers captured three NBA crowns in a row since 2000-2002, returning the team to glory days never seen since 1988.

Bryant saw his career with the Lakers, branching out successfully in the entertainment industry after his retirement.

In 2018, he won an Oscar for his animated short film “Dear Basketball,” a love letter to the sport that gave him fame and fortune.

ISLAMABAD: A 4 years outdated woman died after falling from third ground of Islamabad airport whereas taking part in, ARY Information reported on Monday.

As per particulars of the dreadful incident, the incident occurred on the third ground of the Islamabad airport the place a four-year-old woman who got here to the airport together with her mother and father, fallen at 2nd ground.

Sources stated, the woman was taking part in on the third ground. She was rushed to Pakistan Institute of Medical Sciences (PIMS)in essential situation, however she succumbed to her accidents.

PIMS spokesperson stated, the woman was introduced lifeless to the hospital. “She died on the spot because of extreme head accidents”, he continued.

In 2018, a passenger boarding bridge HAD collapsed on the Islamabad Worldwide Airport, nevertheless no critical injury was reported.

In keeping with experiences, an unidentified man was injured after the aerobridge collapsed on the airport.

The brand new Islamabad airport was inaugurated on Could 1, 2018, after months of delay. The brand new airport is positioned 30km away from central Islamabad, and its building work had began in April 2007.

DUBAI/CAIRO: Oman’s ailing Sultan Qaboos bin Mentioned, one of many Center East’s longest serving rulers, died on Friday and the Gulf state’s excessive navy council known as on the ruling household to convene to decide on a successor, state media mentioned.

Three days of official mourning have been declared, with flags flown at half-mast for 40 days for Qaboos, 79, who had dominated since taking up in a cold coup in 1970 with the assistance of former colonial energy Britain.

State information company ONA didn’t give a reason behind demise, however Qaboos had been unwell for years and spent every week in Belgium present process medical remedy in early December.

Qaboos had no youngsters and had not publicly appointed a successor. A 1996 statute says the ruling household will select a successor inside three days of the throne changing into vacant.

The excessive navy council, in a press release carried on state media on Saturday, known as on Oman’s ruling household council to convene to decide on a brand new ruler.

If the council fails to agree, a council of navy and safety officers, supreme court docket chiefs and heads of the 2 consultative assemblies will put in energy the particular person whose title has been secretly written by the sultan in a sealed letter.

There was large hypothesis over the succession as home challenges loom massive, from strained state funds to excessive unemployment.

“I think about that the succession itself shall be a clean course of inside Oman,” Kristian Coates Ulrichsen of the Texas-based Rice College’s Baker Institute advised Reuters.

The sultan’s demise comes at a time of heightened pressure within the area between Iran and the USA and US ally Saudi Arabia.

Oman maintains pleasant ties with Washington and Tehran and helped mediate secret U.S.-Iran talks in 2013 that led two years later to the worldwide nuclear pact which Washington give up in 2018.

“Sultan Qaboos had such charismatic authority and have become so synonymous with Oman as a contemporary nation-state that it’s going to naturally be tough for any successor to copy that, a minimum of in the beginning,” Ulrichsen mentioned.

KARACHI: Dengue fever on Friday claimed one other life in Karachi, taking the dying toll from the mosquito-borne illness to 36, this yr to date, ARY Information reported.

As per particulars, a girl recognized as Hajra was present process therapy at a personal hospital of Karachi the place he breathed his final, immediately.

Hospital sources mentioned that the lady was affected by high-grade fever when she moved to Karachi’s hospital and was recognized with dengue fever. She died throughout therapy.

Earlier on November 12, a three-year-old boy and 32-year-old Nadir had additionally succumbed to dengue fever within the metropolitan.

Sindh Governor Imran Ismail had inaugurated an anti-dengue marketing campaign in Karachi on Monday the place he had introduced the institution of camps to conduct free blood exams of the residents.

Whereas inaugurating the marketing campaign, Governor Ismail had introduced that anti-dengue spray might be made throughout the metropolis whereas camps have been being established to conduct free dengue take a look at which prices no less than Rs1600 in laboratories.

Austrian-born Pleskow was behind quite a few Oscar-winning movies as president of the movie firm United Artists from 1973 to 1978 after which as co-founder of Orion Footage.

These included “One Flew Over the Cuckoo´s Nest,” “Rocky”, “Amadeus”, “Platoon”, “Dances with Wolves” and “The Silence of the Lambs”.

By way of him, actors resembling Sylvester Stallone made their debut.

Pleskow had been president of the Vienna Worldwide Movie Pageant, or Viennale, since 1998. He acquired honorary citizenship from Vienna in 2007.

“His dying is a good loss for all of us… he has at all times carried us along with his humor and foresight,” the competition stated in an announcement.

Pleskow was born in Vienna right into a Jewish household in 1924, however fled along with his household earlier than the outbreak of World Warfare II by way of France to america.

He studied engineering however then labored himself up by means of the ranks within the movie trade.

“First I introduced espresso, then I began as an editor, reducing movies,” he as soon as stated in an interview, based on the Austrian information company APA.