Speaking to the media today, the MQM-P leader said that he and his party had a separate view of the federal party about what the country’s problems are and what the possible solutions may be for them.

Read more: The MQM-P coordinator attends a meeting led by the prime minister, refuses to rejoin the cabinet

Siddiqui said that the current regime has spent 1.5 years to make its decisions, he and his party are obliged to highlight the problems facing a common man.

Siddiqui expressed his dismay and said that everything promised regarding the province of Sindh by the federal government has only remained in the newspapers and awaits its material implementation.

Khalid Maqbool Siddiqui added that MQM-P puts a lot of work and effort for people and doesn’t boast about his achievements or show it in the gallery.

Speaking about the spread of toxic gases in the port area of ​​Kemari, Karachi Siddiqui said it was the responsibility of the relevant authorities to present the facts related to the matter on the table.

KARACHI: A meeting was held between the president of the Senate, Sadiq Sanjrani, and members of the Rabbi Committee of the Muttahida Qaumi Movement of Pakistan (MQM-P) in Karachi, ARY News reported Sunday.

During the meeting, Sadiq Sanjrani said he was worried after receiving the report of Dr. Khalid Maqbool Siddiqui’s dissociation with the federal cabinet. To this, Siddiqui said that his political party formed a coalition to solve public problems, while the ministries are somewhat temporary.

Read: the president of the Senate will visit the MQM-P office in Bahadurabad

He said his political party had voted for Sadiq Sanjrani, who represents Balochistan, and that MQM-P has always expressed the rights of the province. He added that MQM-P and the president of the Senate pledged to give voice to the problems of both provinces.

Read: MQM-P will not join the cabinet until complaints are resolved: Amir Khan

“After neglecting minor problems, we will work together to improve the country. [Balochistan Chief Minister] Jam Kamal has also said that he will meet with the leaders of MQM-P. We will solve all problems by sitting together. Khalid Maqbool Siddiqui should withdraw his resignation and consult the leaders of his party. We are all united and I came here to thank Khalid Maqbool Siddiqui and to show solidarity with him, ”said Sanjrani.

KARACHI: The coordinator of the Muttahida Qaumi Pakistan Movement (MQM-P), Dr. Khalid Maqbool Siddiqui, said Tuesday that the ministries are not necessary to serve the masses, as his political party has demonstrated his skills during a clean-up campaign of a week in Karachi, reported ARY News.

Khalid Maqbool Siddiqui, while speaking with journalists in Karachi during the repair work on the Liaquatabad road, said the MQM-P leadership respects the Prime Minister of Pakistan, however, the political party will join the current government every time The prime minister shows a certain willingness to provide some relief to the metropolis that generates 65% of the country’s income.

“Karachi Metropolitan Corporation (KMC) is working in the metropolis despite having limited resources. Regardless of the problems, MQM-P promises to Karachittes to continue its fight for the resolution of its problems. We are trying to accelerate development work in the city. We will use the resources available to improve the condition of Karachi. “

He said his political party was also serving the metropolis when it was not in power and MQM-P will continue its policy on public welfare principles.

While commenting on the latest orders of the Sindh High Court (SHC), Siddiqui said that citizens had also witnessed many joint investigation reports (JIT) in the past that later turned out to be wrong.

Read: Orders of the Sindh High Court to publish the key JIT reports

It is pertinent to mention here that the Superior Court of Sindh (SHC) granted a request earlier that day that sought to publicly disclose three reports of the Joint Investigation Team (JIT) on high-profile cases.

Judge Muhammad Iqbal Kalhoro heard the case and heard the petition presented by the Federal Minister of Maritime Affairs, Ali Zaidi, in the high court that was trying to make the JIT reports public. The bank ordered the authorities to make public the JIT reports on the leader of the Lyari gang war, Uzair Baloch, the tragedy of the Baldia factory fire and the former president of the Society of Fishermen Cooperatives, Nisar Morai .

KARACHI: Muttahida Quami Motion-Pakistan (MQM-P) Convener Dr Kahlid Maqbool Siddiqui on Saturday mentioned that the get together was disgruntled over unkept guarantees however is now relaxed as some breakthrough has been achieved, ARY Information reported.

Chatting with media after the assembly between the PTI-MQM-P delegations concluded, Siddiqui mentioned his get together had highlighted the issues going through Sindh’s city areas and Karachi and the way the eighteenth modification had wreaked havoc, “one thing that promised devolution of energy has been used as a software for accumulation of energy.”

He additionally mentioned that Sindh’s city areas “are within the Intensive Care Unit” and people areas of the nation must be taken care of by the federal government whose shopkeepers, merchants and industrialists had been “fulfilling their duties” and producing income.

“The PTI knew about these issues earlier than we joined fingers to type the federal authorities,” he mentioned, saying that the MQM-P had given the ruling get together “unconditional assist” throughout its time of want.

The MQM-P convener mentioned talks held with the PTI delegation had been “encouraging” and the calls for put ahead by his get together had been for the welfare of the folks of Karachi and Sindh. He mentioned these calls for weren’t meant to profit any particular person or political get together however the folks usually.

“Sindh’s city areas are in want of quick reduction,” he mentioned.

Talking at a press convention earlier, he had mentioned that being a member of Prime Minister Imran Khan’s cupboard served no helpful function as there was no progress in the direction of the removing of their reservations in regards to the points confronting the port metropolis. 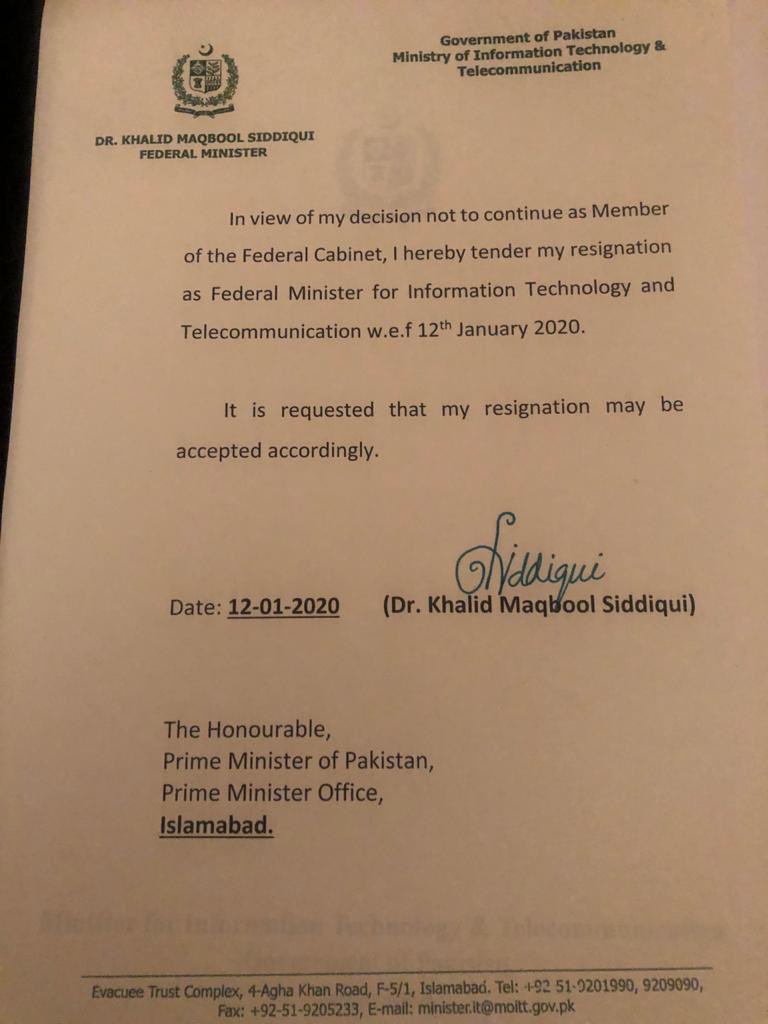 The minister tendered his resignation and had it dispatched to the Prime Minister of Pakistan, Imran Khan searching for approval.

The minister has requested the prime minister for pressing approval of his resignation.

Talking at a press convention, he mentioned his being a member of Prime Minister Imran Khan’s cupboard served no helpful function as there was no progress in the direction of the elimination of their reservations regarding the points confronting the port metropolis.

ISLAMABAD: Federal Minister for Science and Know-how, Fawad Chaudhry, mentioned on Sunday that the calls for raised by Muttahida Qaumi Motion Pakistan (MQM-P) as a political social gathering have been authorized and it isn’t uncommon for the emergence of variations between political events, ARY Information reported.

Fawad Chaudhry, in his assertion to the media, mentioned MQM-P has proper to have a distinction of opinion as each political social gathering has its personal stance and vote financial institution. He added MQM-P is a coalition social gathering of Pakistan Tehreek-e-Insaf (PTI) within the federal authorities and its reservations might be eliminated via session.

He mentioned {that a} delegation led by Asad Umar will meet MQM-P management. The minister mentioned there isn’t any different political chief within the nation which may compete  Prime Minister Imran Khan.

Whereas commenting over the provide made by Pakistan Folks’s Occasion (PPP) chairman to MQM-P, Chaudhry mentioned Bilawal Bhutto-Zardari delivered an unserious provide to the federal government’s coalition accomplice. The management of MQM-P is smart in making its choices.

Criticising the Pakistan Muslim League Nawaz (PML-N), the federal minister mentioned there’s a must publish an advert for the looking Shehbaz Sharif, who had departed from the nation whereas sending his brother Nawaz Sharif overseas.

Chaudhry revealed that many PML-N leaders are actually wishing for the social gathering’s place of Shehbaz Sharif. He added that it’s the time to witness how PML-N management took management over his inner rifts.

Talking at a press convention, he mentioned his being a member of Prime Minister Imran Khan’s cupboard served no helpful function as there was no progress in the direction of the elimination of their reservations in regards to the points confronting the port metropolis.

Siddiqui, nonetheless, mentioned his social gathering wouldn’t withdraw help for the ruling Pakistan Tehreek-e-Insaf (PTI). “We aren’t withdrawing our help,” he assured, including his holding the portfolio of the federal minister was elevating lots of questions. He mentioned his social gathering intends to satisfy the promise it had made to the PTI.