A video edited in a deceptive way that circulates online claims that the widow of basketball legend Kobe Bryant committed suicide.

This is false, there has been no such announcement, and the images show a Fox News presenter talking about the death of a colleague.

“NEWS: VANESSA BRYANT registered his SUICIDE after the depression attack this morning,” says the headline that accompany the video, which features a BBC News logo.

But there is no report of his death on the BBC News website.

The claim comes weeks after Kobe Bryant and the couple’s 13-year-old daughter, Gianna, died in a helicopter crash in California.

The video in the video is actually from Fox News, and shows host Neil Cavuto announcing the death of journalist Brenda Buttner in 2017.

“I have very sad news to share with you today,” says Cavuto, who has been edited in the deceptive video to cut after that statement, warning users of graphic content and urging them to share the post to see the rest of the clip. 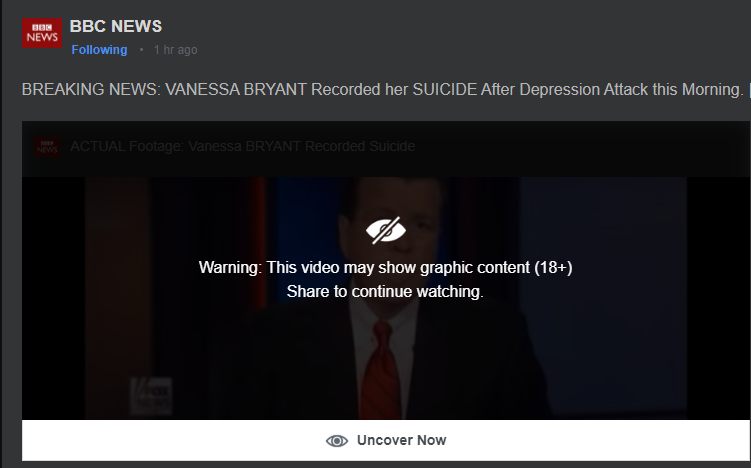 Clicking on some versions of Vanessa Bryant’s suicide claim, another video opens that follows the same pattern, but says her daughter Natalia committed suicide, a claim that is also false.

“NEWS: THE ELDERLY DAUGHTER OF KOBE BRYANT ‘NATALIA BRYANT’ left a ‘suicide VIDEO’ of herself ‘SUICIDE COMMITMENT’ after BEING UNFORGETTABLE …” reads the headline that accompanies that video, which, as the claim on His mother presents a BBC News logo.

However, there are no reports of Natalia Bryant’s death on the BBC news. website or elsewhere

The video shows another presenter who says: “Well, tonight the commotion is still hard for fans.” Then, tell viewers that they should share the post to see the rest.

The footage in the video is actually from Fox 32 Chicago, an affiliate of the network, and shows host Dawn Hasbrouck in a clip of years.

“The graphics in that clip are at least five years old and we haven’t used them in a long time,” Will Hager, digital content creator at FOX 32 Chicago, told AFP over the phone. “And it’s really an outdated video. Dawn looks different now. Everything is different.”

Neither Bryant nor a representative could be immediately contacted to comment on any of the false claims.

The former Australian referee is in Pakistan to officiate in the current fifth edition of HBL Pakistan Super League (PSL).

Read more: Ali Zafar has something to say about Ali Azmat, anthem of PSL

When sharing the video, a social media user wrote: “Adding an Australian touch to Karachi’s own doodh paati (Tea).”

The fifth edition of the Pakistan Super League (PSL) began with a golden inauguration ceremony at the Karachi National Stadium on February 20.

Read more: The kings of Karachi defeat Peshawar Zalmi in the last thriller

SIALKOT: The guests have been received in the middle of mobile phone showers and watches, in addition to receiving expensive gifts at a unique wedding ceremony held in a suburban town in the city of Sialkot of Punjab, ARY News reported Friday.

A video went viral on social media platforms where family and family members showered with mobile phones and watches at a wedding ceremony organized in a suburban town of Sambrial Tehsil.

Members of the bride’s family have also given a set of unique gifts in dowry that include six motorcycles, a pair of camels, cows, buffalo, sheep, chickens, rabbits, dogs and ducks.

In addition, wedding guests were also rewarded with other gifts, such as the Holy Quran, 350 dresses and prayer mats on the side of the bride.

Early in the day, a deputy police superintendent (DSP) faced problems after organizing a luxurious wedding reception for his son in Sindh, which was also attended by the Additional Inspector General (AIG).

The DSP received a statement of declaration of assets from the AIG after attending the event. The AIG has claimed that a DSP rank police officer earns 1.5 lac per month in salary, the reception was too expensive for a government employee.

The notice has asked the DSP in question to present details of its assets within seven days of receipt. The notification also states that in case of non-compliance by the party, the matter will be sent to the National Responsibility Office (NAB) for a thorough investigation.

A rare Ferrari F40 with a value of £ 1 million was reduced to ashes after bursting into flames in Monte Carlo.

According to the details, the Italian sports car, manufactured in the late 1980s, sent flames and smoke after the rear of the car suddenly caught fire.

In the video, you can see the rare classic car melting in the street of Monte Carlo. It is one of the 1,311 F40 manufactured from the late 1980s until the early 1990s, which are among the fastest cars on the road. The vehicle can reach a speed of 228 mph, Mail Online reported.

A resident even tried to extinguish the fire and sprayed water on the vehicle, but all his effort was in vein. When firefighters reached hell and soaked it, the classic car became the melted helmet.

No injuries were reported in the incident.

ADDIS ABABA: The Ethiopian government on Thursday assumed custody of an invaluable 18th-century crown that a former refugee had hidden in his apartment in the Netherlands for two decades.

The delivery took place at a ceremony in the capital, Addis Ababa, attended by Prime Minister Abiy Ahmed and Sigrid Kaag, the Dutch Minister of Foreign Trade and Development Cooperation.

Sirak Asfaw, the former refugee who is now a Dutch citizen, fled Ethiopia in the late 1970s during the so-called “Red Terror” purges. He found the golden crown, which presents images of Christ and the Twelve Apostles, in 1998 in a suitcase left by a visitor.

He had “disappeared” from the Church of the Holy Trinity in Cheleqot, a village in northern Ethiopia, the Dutch government said in a statement Thursday.

Sirak assumed that his crown had been stolen, but he was worried that it would “disappear again” if he returned it to the leaders of Ethiopia, so he kept it in his apartment in the Dutch port city of Rotterdam, he told AFP last year.

He then contacted Arthur Brand, a renowned Dutch art detective, who brought the story to the attention of the Dutch government.

“We are honored and delighted to have been able to facilitate the legitimate return,” Kaag, the Dutch minister, said in a statement Thursday.

Abiy thanked the Dutch government for organizing the return of the device, according to a report by the state-affiliated Fana Broadcasting Corporate, which said the crown “is believed to be one of only 20 in existence.”

On Thursday afternoon, the crown was on display at the National Museum of Ethiopia.

A heartbreaking video of a dwarf child pleading for ways to attempt suicide by his mother after being a victim of bullying has gone viral.

Yarraka Bayles, of Brisbane, filmed her son Quaden crying in the car after she picked him up from school and publicly shared the video on social media.

A sobbing and visibly distressed Quaden could be seen in the video asking his mother to give him a rope.

‘Give me a rope, I want to kill myself. I just want to stab myself in the heart … I want someone to kill me, “the boy was quoted in the video that is now seen more than three million times.

At the beginning of the five-minute clip, Bayles said: I just picked up my son from school, I witnessed an episode of bullying, I called the principal and I want people to know that this is the effect of bullying. This is what bullying does. “

“So, can you educate your children, your families, your friends because all that is needed is one more instance … and you wonder why children are killing each other.”

The mother said that this was not the first time the boy expressed his desire to commit suicide. “For the first time it was when I was six years old and I was surprised to know how to treat such a child,” he said.

Read more: A shocking video shows the school bully dragging the girl by a ponytail

Since sharing the video, Bayles has been flooded with friendly messages of support from friends and strangers alike.

Not only did the Indigenous All Stars NRL team invite Quaden to show their support, but he was also invited to television programs to raise awareness about bullying offers.