Trendy women, popular girls, Cher Horowitz from the 1995 film “Clueless” and every fashionista in between during the late 20th century flocked to Contempo Casuals, the pioneering giant in fast fashion apparel. The future of the brand and its historical aspects are linked to Hancock Park.

Los Angeles couple Dottie and Wil Friedman founded a clothing company in 1962, soon after coming to Los Angeles. Although the chain disappeared in 2001, its flamboyant motifs and trendy styles were revived locally – on T-shirts. The grandson of the Friedman family and Hancock Park resident Max Rubin, 21, has just launched “Sample Tees. Rubin is a graduate of Campbell Hall and is currently a senior at Chapman University, where he is majoring in business administration and management.

Rubin’s grandfather, Wil Friedman, approached him with the idea of ​​reusing the original Contempo Casuals ad for e-commerce. Friedman collected advertisements for his brand from billboards, newspapers and magazines throughout the 60s, 70s, and 80s. Finally, Rubin selected three designs from his grandfather’s archives, digitized them, and placed them on a T-shirt. Rubin plans to include more designs in the future.

“[My grandfather] always working for himself, starting a new business, taking up new challenges and having fun learning. I think this is him who wants to start another business, and I know, throughout life, he has always seen the same urge in me, “said Rubin. “He’s always wanted to encourage that, and help me get to that point too.”

The two of them were able to develop the concept together for a year before Friedman passed away in September 2019. 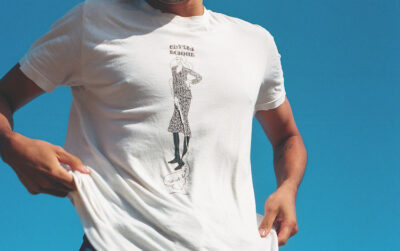 Rubin brings a modern twist to his grandparents’ old business. In contrast to the flamboyant feminine Contempo Casuals, Contempo Tees caters to people of all genders, printing only in monochrome and using a vintage white T-shirt style.

Part of Contempo Casual’s history has other local ties.

Hancock Park resident Philip M. Hawley, 95, said he saw the same sign of modernity in Contempo Casuals when his company bought it from Friedmans in 1979. Hawley is chairman of Carter Hawley Hale Stores, a major retailer that also owns Neiman Marcus and Bergdorf Goodman. At the time of purchase, Hawley recalled that Contempo Casuals had assets of approximately $ 6.4 million.

Hawley, a longtime local resident in Windsor Square and Hancock Park, and who still has many descendants and their families living around Larchmont, said in our recent interview that other people in the fashion industry are developing products to appeal to. as many demographics as possible. The Friedman family did not come from a fashion background – they were liquidators interested in selling unsold women’s clothing – so they developed a non-traditional approach to retail in which they focused on one major demographic group.

“Contempo Casuals is, in my judgment, a very, very extraordinary group of stores catering to young, fashion-conscious women,” said Hawley. “As I recall, when we bought them they probably had eight or 10 stores, and everything was going well and it’s clear their customer base was very enthusiastic about the product offering they made. We decided to try to buy it and expand it dramatically, and we did. “

With other fast fashion competitors catching up in the next decade, the chain was losing money and Carter Hawley Hale sold it to Wet Seal Inc. for $ 1 million in stock in 1995. Contempo Casuals remains the property of Wet Seal Inc., which now operates exclusively as an online retailer.

The path to the future

Rubin is charting his own path with Contempo Tees, even as he builds up his grandfather’s archives and advice. Once he graduated from college, he said he planned to devote more energy to growing the company.

“I’m very fortunate to have my grandparents develop a legacy that I think puts me ahead of the current competition, and I think there is a lot of potential,” said Rubin.

“And apart from any success from the company, it’s really worth what I have learned from this and the skills it has taught me.”