In the past, the oldest child in a typical Indian family would get new clothes, and it was passed down to younger siblings and cousins. After that, if the cloth is not tattered it will be used as a rag.

The fast growing economy and a growing middle class, however, have given rise to consumerism. In 2014, on average, customers bought 60 percent more than they used to buy in 2000. There has been a shift from buying based on need to purchasing based on aspiration.

Previously, consumers were willing to buy merchandise from well-known fashion labels because of their guaranteed quality. On the other hand, today’s consumers want the latest trends but are unwilling to pay that much because they don’t value quality.

Major fashion retail operators saw an opportunity in this dichotomy and in an effort to match consumer desires, the concept of “fast fashion” was born. This means a faster turnaround of new styles, an increase in the number of collections offered per year and, often, lower prices.

Fast fashion brands like Zara, owned by Spain’s Inditex, now offer more than 25 lines a year; Sweden’s H&M manages up to 16. Today, a consumer buys twice what he bought in 2000, but keeps each garment for half.

From pesticides poured on cotton fields to water, energy, and other resources needed to make clothes, all of them are consumed at a much faster rate and reach their final destination, most often landfills, faster.

According to the Ellen MacArthur Foundation, the global fashion industry produces about 53 million tonnes of fiber every year, more than 70 percent of which ends up in landfills or is burned and less than 1 percent of which is reused to make new clothes. Overused resources and waste resulting from overconsumption are major problems.

Fashion is slowly poisoning the planet. The Global Fashion Agenda estimates that in 2015 alone the global textile and clothing industry was responsible for the consumption of 79 billion cubic meters of water and 1,715 million tonnes of carbon dioxide (CO2) emissions.

It takes 3,781 liters of water to make jeans, from cotton production to delivery of the final product to customers, according to figures from the United Nations Environment Program.

The industry is responsible for 10 percent of annual global carbon emissions, more than aviation and shipping combined. At this pace, industrial CO2 emissions are projected to increase by more than 60 percent to nearly 2.8 billion tonnes per year by 2030.

In addition, the mode takes up a lot of land. The total area of ​​forest land cleared for agriculture, including the cultivation of raw materials such as cotton and cellulosic fibers, has exceeded the safe operating space by 17 percent. This is set to double by 2030.

Apart from the high volume of clothing consumption, the means of production and processing of raw materials are also very wasteful and polluting. Fabric dyeing alone can require as much as 150 liters of water per kilogram, and if disposed of without treatment, causes water pollution.

About 20 percent of global industrial water pollution is caused by dyeing and treating textiles. Surprisingly, natural fibers, particularly cotton, silk, wool and cowhide, have the highest environmental impact on water use, chemicals, energy, and animal cruelty according to the crib to gate assessment (from resource extraction (cradle) to the factory gate).

They come in two common forms, Polyvinyl Chloride (PVC) and Polyurethane (PU). These petroleum derivatives are cheaper and easier to obtain and produce than animal or vegetable fabrics. At first glance, they may seem like the perfect alternatives; However, this evolution has also had a negative impact on the environment due to the extraction of fossil fuels, the abundant use of water and chemicals, and the nature of these materials that are not biodegradable. 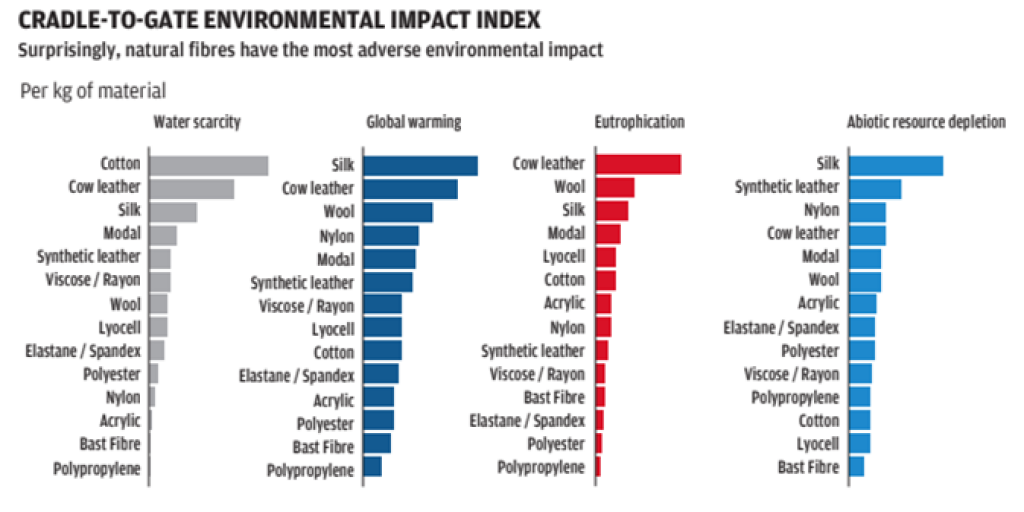 Source: Pulse of the Fashion Industry, 2017

Synthetic clothing is slowly destroying marine life. One wash of polyester clothing can release 700,000 microplastic fibers into the environment. It’s estimated that half a million tonnes of these microfibers end up in the ocean each year, according to the Ellen Macarthur Foundation.

Microfibres cannot be extracted from water and can spread throughout the food chain.

Industry needs to step up the challenge of climate change. The transition to the closed-loop mode value chain is a necessity of the day, whereby discarded products replace raw materials for production.

In fact, steps have been taken in this direction. Most major retailers such as Levi’s, Nike, Adidas, Zara, and H&M now offer expired in-store garment collection schemes, where they recycle old clothes that were dropped off at the store by customers (who get coupons to shop for new clothes with retailer).

In India, H&M is the only international brand that has come out with such a scheme to date. On the other hand, indigenous brands are taking the lead but have not yet entered the mainstream fashion market.

Recycling fiber will largely reduce the environmental impact of the raw material, but current technology can cause a 75 percent loss in value during the first cycle itself. Although recycling reduces 75 percent of the energy required and 40 percent of CO2 emissions compared to pure polyester, there will be little progress until the numbers (value loss) change, as predicted by the eco-friendly clothing brand based in California Patagonia, which recycles nylon fiber. and polyester for producing outdoor clothing.

The economy of recycled materials is not attractive at the moment; recycled polyester, for example, is 10 percent more expensive than virgin material. The need today is innovation, collaboration and supporting regulatory action until technology breaks down barriers to large-scale recycling.

Several natural and plant-based alternatives exist today. This satisfies consumers’ desire for virgin raw materials while being environmentally friendly. First of all, there are legacy natural fibers such as linen, hemp, hemp, bamboo, organic cotton and even nettle, all of which are biodegradable and require less water and fertilizer and come back again through new and innovative uses.

Then there are new bio-based raw materials. Lyocell consists of cellulose fibers which are made by dissolving pulp, for example from wood (Tencel®) or bamboo (Monocel®).

Bio-based nylon (one of the names is rennlon®) is derived from glucose and other renewable raw materials and is in the early stages of commercialization. For example, in 2016, Adidas released footwear featuring a fully biodegradable protein-based thread called Biosteel® which relies on a nature-based finish.

Other promising fields include research and prototyping entirely new fiber types, such as merino wool-like yarn made from gelatin (undergoing trials at eth Zürich), and skin-like materials made from agricultural waste materials such as pineapple leaves (Pinatex from scratch) Ananas Anam) or cork bark (from Portugalia Cork).

These amazing ingredients are already there, but getting them mainstream requires careful collaboration. Beej Studios is one of the brands in India working with new age materials in synergy with the local community and international suppliers.

Arundhati Kumar, the founder, believes in mainstreaming sustainability and creating a durable supply chain. They use plant-based, cruelty-free fabrics such as Desserto (from Mexico, which is made from cactus pulp) and Pinatex. They also use fibers made from cork bark.

“The cork that we work on comes from Portugal. The bark of the cork oak is harvested every nine years, which is then used to make cloth. When harvested responsibly, they absorb up to five times as much CO2 as they grow, thus playing a major role in reducing greenhouse emissions. “

All fabrics are certified and harvested responsibly with a low environmental footprint and are 100 percent recyclable. The zipper used in the bag comes from the Japanese brand YKK, made from recycled polyethylene terephthalate (pet) plastic. Kumar said he was aware of the carbon footprint that was generated when importing materials. Hence, Studio Beej has incorporated an Indian option into its product lineup.

The bag is lined with a cloth originating from a weaver community outside of Bengaluru called Khaloom. They recycle post-consumer threads to make new fabrics. They also took Khesh material, a material recycled from old cotton saris where the sari is torn into pieces, turned into yarn and then woven again, from Amar Kutir, a cooperative association based in Shanti Niketan, West Bengal.

When asked about the demand for its sustainable products, Kumar believes that there is little change but is seen in the use of materials that are sourced from sustainable sources.

The fashion industry presents a linear business model; hence, it is clearly a contributor to environmental disruption but also a great untapped opportunity. If the industry succeeds in closing the loop completely between the end-of-use phase and the raw material phase, discovering new age raw materials with advanced technology and increasing energy efficiency, the environmental footprint will be drastically reduced and to 160 billion Euro-a-year opportunities for the world economy will be created.

This kind of circular model will tap into the passion and creativity that made the fashion industry famous and which always allows it to flourish. As far as consumers are concerned, we shouldn’t over-consume, even if we indulge in a sustainable fashion. We have to move from fast fashion to mindful fashion.


We are your voice; You have supported us. Together we build journalism that is independent, credible and fearless. You can help us further by making a donation. This will mean a lot to our ability to bring you news, perspectives and analysis from the ground up so we can make a difference together.