Like most of us, Tara and Brenton Ebersold have had a tough year. Bleu Barn Bistro, their farm-to-fork food truck and catering business, took a hit during the pandemic, and they had to postpone plans to open their food stall in Camp North End. But that is nothing compared to the sadness that enveloped them in early 2020.

Ebersolds’ six-day-old baby boy, Elijah, died December 7, 2019, after complications at birth. They didn’t see him coming; Tara’s pregnancy is healthy and smooth. They relied on family and friends in the months that followed, and they shifted their focus to the food stall they planned to open in March.

Both of them have long had an interest in the culinary field. Tara cooked with her grandmother, an Italian immigrant who grew the ingredients in her backyard, and Brenton prepared family dinners from the time she was in elementary school. They met 12 years ago in first class at Johnson & Wales and launched their food truck in 2014. “We started food trucks out of wedlock,” says Brenton. “It’s been with us longer than we’ve ever been married.” (The wedding was in October 2016.) 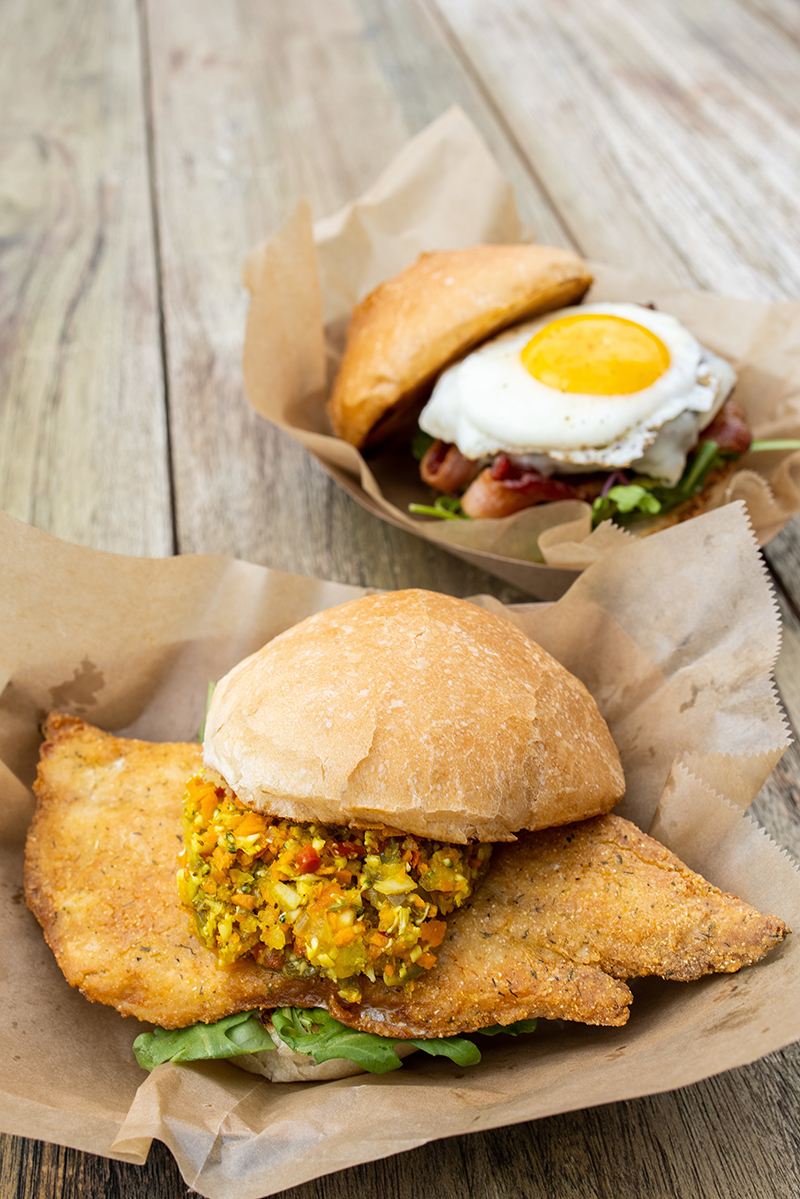 Bleu Barn Bistro stems from their love of fresh and seasonal food. At first, they visited a farmers market every Saturday to build relationships with the farmers who would supply meat and produce sandwiches, tacos and salads to take home. They choose food trucks over white tablecloth restaurants because of their lower financial risk, and it also allows them to go to festivals and breweries where they can build a following and regularly change their menus.

The Ebersolds added Bleu Barn Catering to their portfolio in 2015 and Bleu Barn Pantry in 2018, combining all the businesses under the Bleu Barn Bistro umbrella. “At the end of the season, a farmer will have 50 pounds of unused peaches, so instead of losing money, we can help throw the food away and turn it into something else,” Tara said. “We make our market happy with the leftover broccoli stalks which are not very pretty but still delicious.”

Business is steady, and a permanent location looks like the next step. They observe places in NoDa and the South End, but when they visit Camp North End, they know the concept of adaptive reuse that aligns with their goals. “They are big at building their communities and letting small businesses thrive,” said Brenton. “The people there think the same. Greg (Collier), Samantha (Allen) … all creative, not mass produced. ”

Then the pandemic delayed that plan. But the Ebersolds have another focus: In late February, Tara found out she was pregnant again. Emotions mixed. “Pregnancy after miscarriage is difficult,” he said. “We’re not as open as last time; we are more careful now. ”

They kept the news to themselves and continued on with Bleu Barn Bistro. They use the time at home to test recipes and care for their gardens, and they notice a welcome trend: Even though grocery stores can’t keep up with demand, more neighbors have fresh meat and produce delivered to their homes. “Farmers need to shine a little bit during a pandemic,” said Tara.

“They weren’t hit – it was Tyson and the big factories,” Brenton added. “The smaller farms are actually overloaded. People feel safer with food that originates from their state. ”

When North Carolina moves to Phase 2 in June, Ebersolds officially opens Bleu Barn North End with La Caseta and SARU by Bow Ramen at the Gama Goat Camp North End building. “It’s one of the best locations you can open during a pandemic,” said Brenton. “It’s an open concept with lots of room for spread and social distancing.”

The Ebersold family believes more people will continue to eat and support local food. Next year they hope to expand their commissioner’s kitchen on Tyvola Road into a storefront with a cafe. “I think people understand that this is not just a fad,” said Brenton. “Ten years ago, they said farm-to-table was fashion. But it’s still here and stronger than ever. ”

However, until September, they were focused on the arrival of a baby girl. They plan to celebrate Elijah’s birthday on December 1 because they want their daughter to know that she has an older brother. But for the first time in nearly a year, they allowed themselves to feel excited about their family’s future. “We have guarded ourselves from that; it’s my heart’s way of protecting itself, “Tara said.” It’s been a crazy year, but I’m ready for some fresh air. “

TAYLOR BOWLER is the lifestyle editor for this magazine.

UPDATE: The family welcomed a baby girl in early November. “She was named after my grandmother, and another Baby E. We called our two babies Baby E when they were pregnant because of our last names. We ended up naming our son Elijah (baby E), and wanted to keep another E name in his honor. “ 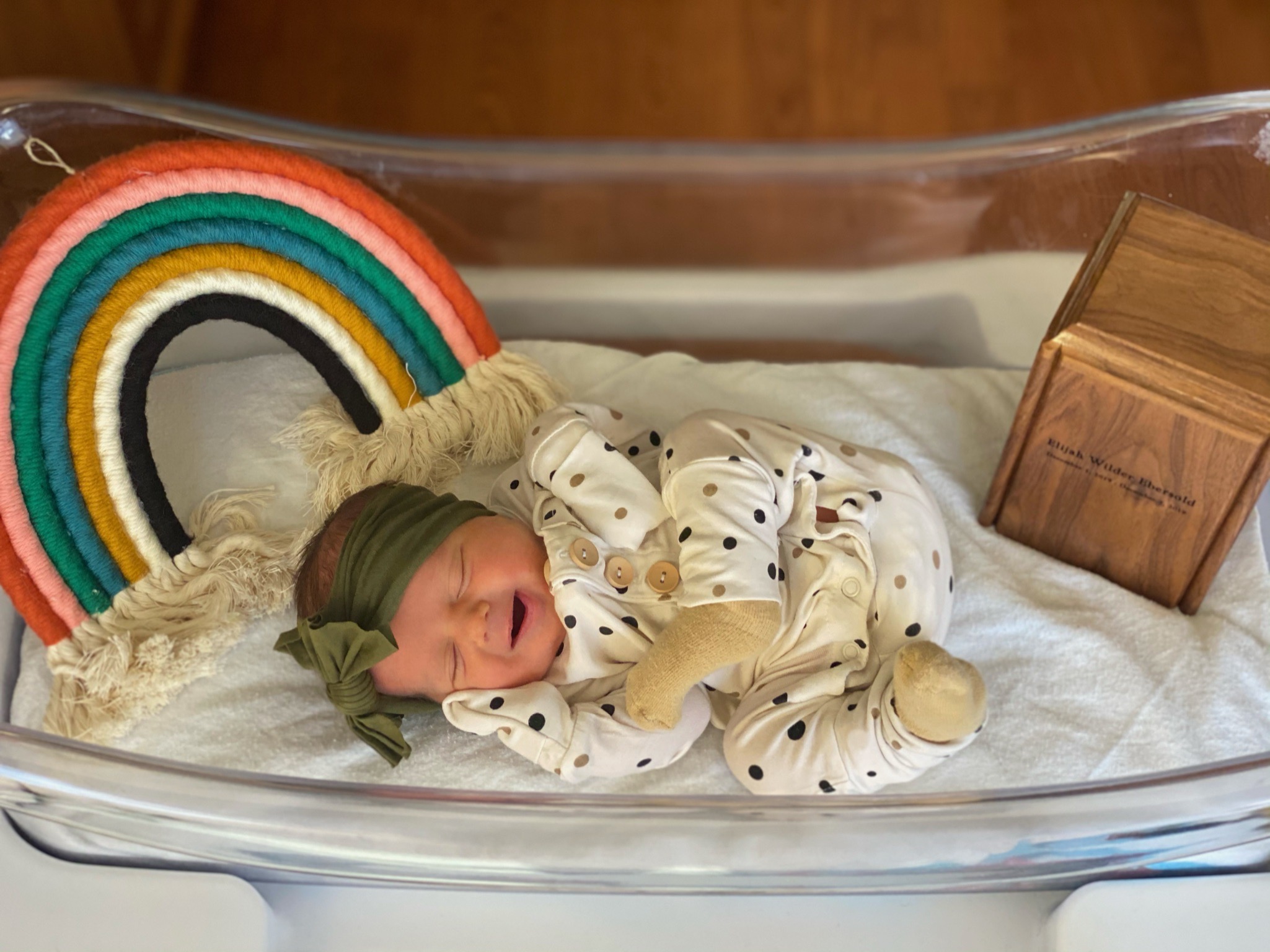