Angela Merkel has asked the Kremlin to unwind a recent military buildup near eastern Ukraine, the chancellor’s office announced in a statement released Thursday.

Recent clashes between pro-Russian separatists and government forces have sparked fears of an escalation in the conflict Ukraine’s eastern Donbass region.

During the phone call, Merkel and Russian President Vladimir Putin also discussed other topics, including the imprisonment of Russian opposition figure Alexei Navalny.

What did the Kremlin say?

“Vladimir Putin drew attention to the provocative actions of Kyiv, which have recently deliberately exacerbated the situation on the front lines,” the statement read.

The deputy head of Russia’s presidential administration, Dmitry Kozak, was quoted as saying by the TASS agency on Thursday as saying that any major military hostility could mean “the beginning of the end of Ukraine.” He argued that Russia would be forced to defend its citizens in eastern Ukraine.

What’s the situation at Donbass?

Ukrainian President Volodymyr Zelenskiy is heading to Donbass on Thursday. He said he “went to the site of the escalation,” adding that “Ukraine needs peace and will do everything for this.”

Russia and Ukraine accuse each other of escalating tensions between Ukrainian forces and pro-Russian separatists. On March 26 alone, the Organization for Security and Cooperation in Europe (OSCE) took note of the hundreds violation of the ceasefire. 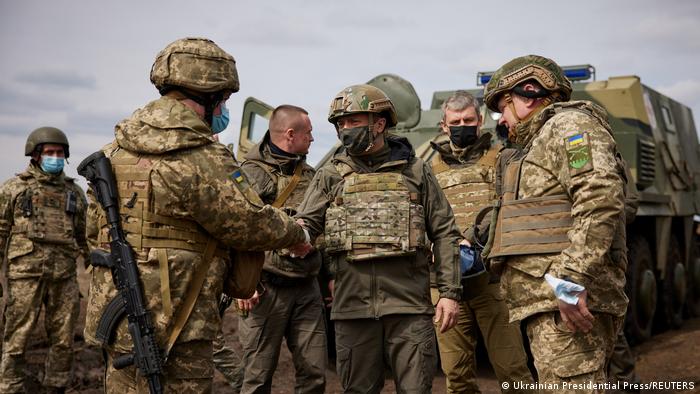 The Ukrainian government has repeatedly called on Russia to withdraw its troops from the border, with the Kremlin responding that internal troop movements are a domestic matter and arguing that they have the right to protect Russian-speaking citizens of Donbass if a shaky ceasefire does not apply.

The European Union, NATO and the US have recently condemned Russia’s military build-up on the border.

The conflict has killed at least 14,000 people since then Russia’s annexation of Crimea in 2014, according to the Ukrainian government.