Zainab Ansari, six, was raped and murdered by a serial killer in Kasur, east Pakistan, in 2018.

The brutal killing of Zainab Ansari, six, sparked outrage across Pakistan in 2018, which has seen an increase in incidents of rape since then.

His body was left in a dump in Kasur, east Pakistan, by serial killer Imran Ali, 24, who was later sentenced to death and hanged.

She was kidnapped in early January while she was walking to the Koran class.

CCTV footage showed her being taken away by the suspect five days before she was found raped and strangled in a rubbish heap about a mile from her home.

Angry mobs surrounded Ali’s home not long after he was arrested and in October he was sentenced to death after confessing to the murder of his and six other girls.

He was executed at the Kot Lakhpat prison in Lahore.

The case is the first among a catalog of brutal gang rapes and murders seen across the country in recent years.

In April last year, a gang-raped woman in Uch Sharif accused a police officer of raping her in a further attack when she went to report the crime. The policeman was later arrested.

A transgender person from Kamalia was dragged out of a car before being tortured and raped by two men later that year.

Four transgender people, from Kamalia in Pakistan, are booked for a festival performance at Mai Maseet Wali Mela near the village of Dhoop Sari, on Sept. 20.

They were driving to the town of Jhang when five men intercepted and pulled one of the group to a nearby farmhouse, around 2 a.m.

Pakistani Prime Minister Imran Khan has called for sex offenders to be hanged or chemically castrated amid protests over the gang rape of a woman in the country in September this year.

Two people raped one of the passengers while three gunmen were on guard.

The victims were then dropped 20 kilometers away in Sahiwal, where they were collected by Binyamin’s colleagues who were at the festival venue.

The pair reported the incident to Harappa police who were “reluctant” to follow up on the case, according to Binyamin.

The police arrested five suspects and two of them were nominated.

Recently, a 14 year old girl died while having an abortion six months into her pregnancy after being repeatedly raped by her uncle.

The girl, identified by local media as Uzma, started living with her maternal aunt and husband Ghulam Anwar. 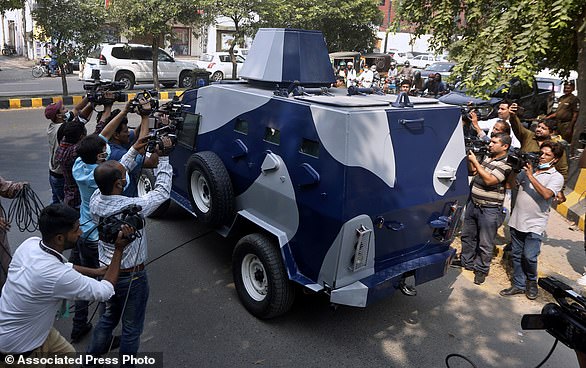 A vehicle carries Abid Malhi, one of the suspects for gang rape of a woman on a deserted highway, following his trial in Lahore, Pakistan, on Tuesday, October 13, 2020.

Uzma became pregnant and died in September this year after being repeatedly raped by Anwar.

He and his wife were arrested by Okara police in October after Uzma’s father filed a complaint.

In the same month, two men were arrested for gang rape of a woman in front of her children on a Lahore highway.

Abid Malhi was finally arrested after a month-long manhunt following the infamous rape in September.

Another suspect, Shafqat Ali, was arrested a week after the attack.

Police earlier said the woman had locked her car door when she ran out of gas on a road in Punjab province, of which Lahore is the capital, and called for help.

But the two men, who were armed, broke the car window and dragged her outside where they raped her.

The attack shocked Pakistan and galvanized women’s rights activists, especially after a senior Punjab police officer, Umar Sheikh, blamed the victim for being alone at night in a car with her two children and for running out of fuel.

On November 10, Rafiq Malik was arrested for the kidnapping and gang rape of a mother and her four-year-old daughter in Kashmore, a district in Pakistan’s Sindh province.

The police continued to search for his two accomplices.