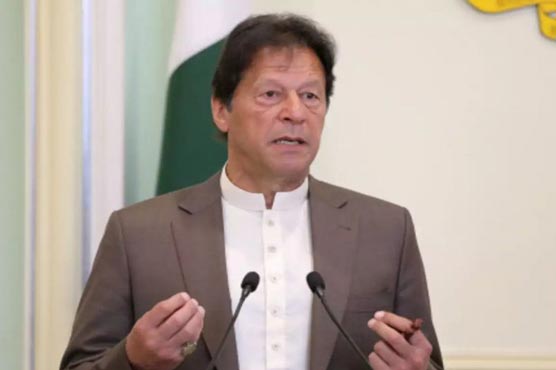 ISLAMABAD (Dunya News) – Prime Minister Imran Khan has called on “heaven” countries to immediately and unconditionally return all foreign assets that prove stolen or whose “legitimacy” cannot be explained.

He addressed the virtual launch event of the High-Level Panel Final Report on International Financial Accountability, Transparency and Integrity for achieving the 2030 Development Agenda.

He called for the establishment of a UN Coordination, Adjudication and Mediation mechanism on illicit financial flows. He said Pakistan would work actively with all like-minded countries to achieve this important goal.

The Prime Minister endorsed the Panel’s proposal, which includes applying the international “value” of honesty and integrity to all financial transactions, strengthening the policy framework and reforming the institutions concerned with dealing with these illegal financial flows.

He said national and cross-border financial transactions must be regulated under a “values-based” system, which includes accountability, transparency, legitimacy, fairness, inclusion and equality. He said global financial governance must be improved and policies on illicit flows should be implemented in a coordinated and coherent manner by national and international institutions and bodies. He said international agencies dealing with taxation, corruption and illicit financing should not be used as instruments of pressure and coercion against developing countries.

Imran Khan said the shocking size of illicit financial flows could have a transformational impact on developing countries’ development prospects if they were returned.

The prime minister said seven trillion dollars in stolen assets were parked in financial “paradise” countries. He said the flight of these enormous resources from developing countries was the main cause of their underdevelopment, poverty, inequality and politics.

Separately, the Chairman of the National Assembly Asad Qaiser also met with the PM where the two discussed parliamentary affairs in a session.

Noting that parliaments are the custodian of people’s hope in their MPs, PM Khan reportedly told the NA Chair that the Pakistani government in charge of Tehreek e Insaf believes in empowering them.

READ: The PM aims to accelerate work on improvement projects in the tribal district

Presiding over the summit in Peshawar today, PM Imran Khan said that the development of the tribal district is one of the government’s top priorities.

Praising the sacrifices that the tribal people made for the country, the prime minister directed the provincial government to focus on the development and progress of the area.

Earlier today, Prime Minister Imran Khan arrived in Peshawar to review the preparations of Pakistan Tehreek-i-Insaf (PTI) in Senate elections in addition to a meeting of members of the PTI parliamentary group at the Khyber Pakhtunkhwa (KP) Assembly.

Prime Minister Imran Khan will meet with three members of the delegation representing the families of the missing in March, a statement issued by the Ministry of Human Rights (MoHR) said on Saturday.

Human Rights Minister Dr Shireen Mazari shared this statement on his official Twitter account after meeting with families who were holding a sit-in on the Chowk Express in the federal capital to recover their missing members.

“[I] conveyed the prime minister’s message to them and our commitment to ensure an end to the practice of enforced disappearances through law – the process is now moving forward, ”said the minister’s social media post.

According to the MoHR statement, Dr Shireen Mazari met with families protesting at the prime minister’s instructions to ask them to end their sit-in.

He told them that the prime minister would meet with three members of the delegation, representing the family, in March and that he would arrange this meeting himself.

“[However, prior to the meeting] they [the families] will submit the list of missing persons to Dr Mazari so that their status can be confirmed and presented to the prime minister prior to meetings with family representatives. “

The statement said the family asked the minister that priority should be given to the recovery of missing persons belonging to the 13 families present at the sit-in “and Dr Mazari took note of the request”.

On February 18, it was reported that PM Imran ordered the authorities to speed up the process of passing an effective law in parliament to stop enforced disappearances as families of missing persons pray and search for their loved ones relentlessly without a proper mechanism in place. .

In a post-cabinet press conference, Federal Minister for Information and Broadcasting Shibli Faraz said the prime minister had given clear instructions to activate the bill reportedly waiting in parliament for several years, and put together a mechanism to resolve the issue.

The minister said the prime minister when explaining his point of view to cabinet members said the problem of missing persons during past waves of terrorism was somewhat understandable but with the drastic decrease in terror incidents, there was no justification for such an incident.

“The PM asked why the government shouldn’t make a law where a person can be detained for three, six, nine months or more while stressing that there must be a time frame.

“Half the peace comes when families know that their loved one is alive and in a certain location,” the minister quoted the prime minister as saying.

LAHORE (Dunya News) – Punjab Chief Minister Sardar Usman Buzdar Friday said the incumbent government was putting the country, which had been cut off due to the wrong policies of the former ruler, in the right direction and correcting mistakes made in the past under the leadership of the Prime. Minister Imran Khan.

Pakistani Tehreek-e-Insaf (PTI) officials summoned Sardar Usman Buzdar. CM said he resolved public issues by visiting all Punjab districts and took solid initiatives in this regard after consulting with representatives and party members.

Usman Buzdar said the outdated system only protects the elite class but the regime is working to change it to improve people’s lives.

ISLAMABAD (Dunya News) – Prime Minister Imran Khan said the protection and restoration of forests was part of the government’s priority because trees and plantations were essential to resist the adverse effects of climate change.

He chaired a meeting in Islamabad today (Thursday) on forest protection and restoration in Punjab.

The Prime Minister instructed the use of modern technology for forest conservation and restoration. He suggested formulating a coordinated policy for forest restoration in the province.

The Prime Minister is informed about the steps being taken to revive Manga Chhanga and other forests. It is said that 25,000 hectares of Chhanga Manga forest were turned into barren land by cutting down trees.

From the meeting it was informed that planting on a thousand hectares of land had been completed under the Tsunami of Ten Billion Trees, while forestry on a land of 2,5000 hectares would be completed in 2023.