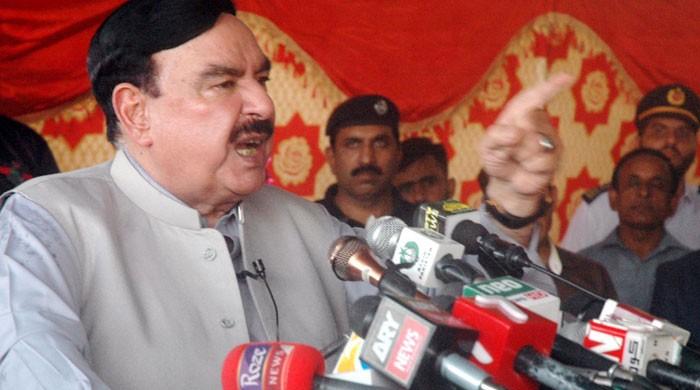 FAISALABAD: Railway Minister Sheikh Rasheed Ahmad on Thursday claimed that Jamiat Ulama-e-Islam (JUI-F) chairman Maulana Fazlur Rehman had a one-on-one meeting with Army Chief of Staff (COAS) General Qamar Javed Bajwa. He challenged that he was prepared to divulge details of the one-on-one meeting between Fazl and Bajwa in Lahore if Maulana dared to deny it. He expressed surprise at the commotion and cries over the meeting and asked if it was not an honor to meet the commander of the armed forces. He accused the JUI-F chairman of wanting to increase sectarian divisions in the country.

Sh Rashid challenged the opposition leadership to step down from the assembly so they could know about their position among the masses in the next election. Sh Rashid claimed that Pakistan People’s Party (PPP) Chairman Bilawal Bhutto Zardari would never vote for resignation from the assembly because that would be the final nail in his party’s political coffin.

He said the PPP would lose its last stronghold, because after submitting to resign, they would never rule even in Sindh.

He said that the PPP was responsible for the plight of the poor in Sindh where they were forced to drink polluted water because the party failed to provide basic facilities for the Sindh community.

The railway minister said the opposition party’s sole aim was to create obstacles for Prime Minister Imran Khan to gaining a majority in the Senate following a vote scheduled for March 2021.

Commenting on Nawaz Sharif’s speech, he said he dug up his own grave by making negative comments against the Pakistan Army. He said the so-called opposition APC movement would fail in the next four months. He called APC’s claims a joke with the Pakistani people because the main political parties participating in APC have remained in power for the past 30 years and they are responsible for the country’s inflation, poverty and illiteracy.

“I will now expose a political leader every week from now onwards,” he said. Sh Rashid said the prime minister is a beacon of truth in the country and wants to reform the country and lead it towards progress and prosperity.

He said it was ironic that some employees who earn nearly Rs16,000 in wages find billions of rupees in their accounts. In fact, the corruptors use the bank accounts of the poor to launder money and make the country even poorer.

Responding to Bilawal Bhutto Zardari’s statement that he would not attend the meeting to be attended by Sheikh Rashid, he said: “I was in politics before Bilawal’s birth. I worked with senior politician Nawabzada Nasrullah Khan for the cause of Kashmir and I will continue to serve the nation as long as the people elect me to power. “

He appreciated the role of Pak Army and said that organized institutions not only guard the geographic boundaries of the country but also help the civilian government in overcoming natural disasters.

He said that Nawaz Sharif had remained silent for the past year, while Maryam Nawaz’s twitter had remained dry for 10 months. The reason behind their silence was because they wanted to fulfill their old demand for the NRO [secret deal].

However, Prime Minister Imran Khan remained steadfast and refused to provide assistance to the looters and looters, who once again hoped for another royal treatment. He said that Imran Khan was the elected civilian prime minister and the army fully supported him as stated in the Pakistan Constitution.

Sh Rashid said PML-N was on the verge of breaking up and soon “N” would give birth to “Sheen”. He said that the APC was a failed politician meeting and he would arrange a public meeting in the same city the next day where APC would organize its protest meeting.

About Faisalabad, he said that it is one of the most important cities in Pakistan that generates enough funds for the country. He announced Rs20 million for repair and renovation of Faisalabad Railway Station.

Earlier, Federal Parliament Secretary for Railways Mian Farrukh Habib also addressed the conference and said that visible improvements would be made to the railways soon. He said the PM had an interest in improving the railway system because it was important to strengthen the national economy.

While appreciating, COAS said that the Naval War College was a prestigious institution of the Pakistani Navy, where officers of the Pakistan Armed Forces and friendly countries were trained to assume the appointment of key Command and Staff.

He praised that the Pakistani Navy with a proud history of courage and sacrifice as a formidable force has always fulfilled the nation’s expectations in defending the maritime borders of the homeland.

ISLAMABAD: The ministry of information and broadcasting must be synchronized with the demands of the 21st century, said the newly appointed Special Assistant Prime Minister for Information and Broadcasting Lieutenant General (Retired) Asim Saleem Bajwa, Thursday.

SAPM spoke during his visit to the ministry in Islamabad, along with the federal minister for the same, Syed Shibli Faraz. Bajwa urged the Information Services Academy to develop programs for training journalists and young people in accordance with contemporary demands.

The appointees were recently briefed on matters relating to relevant ministries and institutions by the Information Secretary Akbar Durrani and the head of the institution.

The information and broadcasting ministry will be developed along modern lines, and will be made more active, Faraz said. The Minister said that the portfolio assigned to him by the prime minister was very important, and it was an honor for him to fill this post.

He stressed the role of the information ministry in relation to the promotion of literature and culture, and envisioned a more ‘vibrant’ future for the ministry.

A new appointment for the information ministry was announced on April 27, 2020, with Bajwa replacing Firdous Ashiq Awan as an adviser, and Faraz filling a ministerial position that had been vacant since April 2019, when the portfolio was taken from now Science and Technology Minister Fawad Chaudhry.

Faraz is a senior supporter of the senior Pakistani Tehreek-e-Insaf and home leader in the Senate since August 2018. He is also the chair of the Senate standing committee on trade and a special committee on round debt, and a member of the parliamentary committee on the Pakistan China Economic Corridor (CPEC).

Meanwhile, before retiring, Bajwa served as Commander of the Southern Command. He was also the director general of the Inter-Service Public Relations (ISPR) – media arm of the Pakistani Army – from 2012 to 2016. In November 2019, Bajwa was appointed chairman of the CPEC Authority.

Duo Faraz-Bajwa is expected to improve the image of the government and maintain its policies more effectively, and the appointment was welcomed among those in the ruling party.

Hameed Haroon, President, and Sarmad Ali, Secretary General of the Pakistan Newspaper Society, in a statement congratulating Senators Shibli Faraz and Lieutenant General Asim Saleem Bajwa for their respective appointments and hoped that the new media team from the federal government would discuss the matter. . untreated problems faced by the newspaper industry and instilling much-needed friendly relations with the mainstream media.

The bearer of the APNS office indicated that the newspaper industry had faced an acute financial crisis due to a significant reduction in government and private sector advertising and the unusually long periodic contributions by the federal and provincial governments.

The crisis was exacerbated by the 19th COVID pandemic which had destroyed the media economy. In this case, APNS has repeatedly requested assistance packages for print media which include an immediate increase in advertising quantum, an increase in government advertising rates and payment of old unpaid contributions.

The APNS office bearer hopes that the new media team will give priority to working on the assistance package needed for print media. The APNS ensures full support and cooperation for Senators Shibli Faraz and Lieutenant General Bajwa in carrying out their responsibilities and strengthening the smooth and friendly relations of the Government Press.


ISLAMABAD: With the induction of the House Speaker in the Senate, Senator Shibli Faraz as Federal Minister and the appointment of Lt. Gen. Asim Saleem Bajwa who has retired as Special Assistant to the Prime Minister (SAPM) for the Ministry of Information and Broadcasting can open the way to smooth government relations with the media engaged in the media. the road is bumpy since women from Sialkot took over the government which has now been freed from their duties.

Even though it was a major overhaul in the federal cabinet but other changes will also be due within a few weeks soon after Eid.

Senator Shibli Faraz is the leader of the House of Representatives in the Senate despite a minority government in the upper house of Parliament and as a leader, he enjoys the status of a federal minister but now he has been assigned a portfolio outside Parliament. With his successor, Senator Faisal Javed who is one of the prime minister’s closest friends and like KP province’s Shibli Faraz is among the front runners for the House Leaders slot while senators from provincial Senators Noman Wazir and Mohsin Aziz are also among the hopes.

The former interior minister and upper house member of the federal capital, Dr Shehzad Wasim could be a candidate for the slot, but the final decision must be taken by the party chairman.

Senator Shibli Faraz is a literary and the son of the late Ahmad Faraz, he is respected among people with a pen but dealing with the media will be a real test if he is appointed minister of Information and Broadcasting. Well-placed sources say that Shibli Faraz was tasked with repairing the fence with media, electronics, and printing both.

General Asim Saleem Bajwa, who was approached by the government to accept the office, was initially reluctant to accept the assignment but sources said that he was persuaded by the higher-ups to accept it. Because the office he represents has a political dimension and he cannot assume that responsibility in return as long as he does not complete two years after retirement, that he will settle in September next year, he will handle the allegations respectfully. .

General Asim Saleem Bajwa was a field soldier who had a challenging post to him throughout his career. As Lieutenant Colonel, he came under the spotlight as an ADC for former president General Pervez Musharraf where he was promoted to the rank of brigadier. He has served in various instructional and command-level posts, such as leading anti-tank battalions, 111th Infantry Brigade, and infantry divisions. He was a Major Brigade in the infantry brigade and served as Chief of Staff in the strike Corps.

He instructed courses at PMA Kakul and the School of Staff and Command Quetta and was the deputy military secretary for the country’s president. Asim Saleem Bajwa assisted General Pervez Musharraf in compiling his book “In the Line of Fire” which was also mentioned by General Pervez in his book.

Lieutenant General Bajwa was appointed as Inspector General of Weapons (IG Arms) at GHQ on December 11, 2016 to September 28, 2017. Then he was appointed as Commander of the Southern Command and Corps XII in Quetta where he beneficially foiled several designs of the country’s enemies.

Asim Saleem Bajwa was assigned to the 34th Punjab Regiment in 1984, at the Pakistan Military Academy (PMA) in Kakul. He graduated from Command and Staff College in Quetta, and National Defense University (NDU) in Islamabad, followed by Staff College, Camberley. He holds a master’s degree in war studies from NDU and defense studies from King’s College London.

The appointment of General Asim Saleem Bajwa also dismissed the impression of damage to the “one-page” narrative.