The regional security situation was also discussed at the meeting.

During the meeting, issues related to the state security situation, violations of the ceasefire by India along the Line of Control and human rights violations in Kashmir were discussed.

The regional security situation was also discussed at the meeting.

They also discussed professional matters relating to the Pakistani Army and the external and internal security situation. They expressed concern over the continued human rights violations in India’s Illegally Occupied Jammu and Kashmir.

Apart from that, they also considered the ceasefire violations and the frequent provocative acts of Indian troops along the Line of Control.

Both the civilian and military leadership decided that the defense of the homeland would be guaranteed with the support of the entire nation at all costs.

Imran Khan said the damage caused by rainwater in Karachi was caused by the construction of an illegal sewer.

ISLAMABAD (Dunya News) – Prime Minister Imran Khan on Thursday emphasized on a permanent solution to the Karachi problem and the timely completion of all projects in this regard.

He chaired a high-level meeting on the Karachi Transformation Plan, in Islamabad on Thursday.

The meeting informed that more than 100 projects were planned under the Karachi Transformation Plan to be completed at a cost of 1.117 trillion rupees. These projects have been divided into three stages in terms of completion.

On the occasion, Imran Khan said that the damage caused by rainwater in Karachi during the rainy season every year is caused by the illegal construction of waterways.

The prime minister clearly directed that alternative arrangements should be made in advance for the rightful Karachi residents before eliminating encroachment.

There are no additional burdens on home loan borrowers

Earlier today, the current prime minister chaired the weekly meeting of the National Coordinating Committee for Housing, Construction and Development directed that no additional burden should be placed on those who intend to secure loans in easy installments for the construction of their homes under Naya Pakistan. Housing Scheme.

Imran Khan has directed to simplify the NOC procedure and approval process for the supply of new electrical connections.

The Prime Minister said at the moment, there is no shortage of electricity in the country and therefore, there is no reason to delay the provision of new connections.

He said the government aims to provide shelter for the community, therefore simple facilities and procedures must be ensured.

PM Imran explained that as current procedures pose difficulties for the construction sector, the lengthy approval process for utility connections must be simplified.

Describing a meeting on the Pakistan Quarters housing project, which is underway, in Karachi, the Secretary for Housing and Works said 600 apartments will be built under the project.

On this occasion, the Prime Minister was directed to provide facilities to Pakistani citizens abroad, who intend to invest in Pakistan.

From the meeting it was informed that an online mechanism was being formulated for the NOCs needed to obtain new gas connections.

In a tweet posted by Inter-Services Public Relations (ISPR) General Qamar Bajwa has prayed that Allah SWT will bless the souls of the deceased in eternal peace.

On the other hand Prime Minister Imran Khan in his tweet has expressed his condolences and said that prayers go to Sharif’s family for the passing of Mian Nawaz and Mian Shahbaz Sharif’s mother.

The chief minister expressed his sincere sympathy and condolences with the bereaved family members.

He prayed that Allah SWT would rest the souls that died in eternal peace and give courage and strength to the family to endure losses that cannot be repaired with fortitude.

While appreciating, COAS said that the Naval War College was a prestigious institution of the Pakistani Navy, where officers of the Pakistan Armed Forces and friendly countries were trained to assume the appointment of key Command and Staff.

He praised that the Pakistani Navy with a proud history of courage and sacrifice as a formidable force has always fulfilled the nation’s expectations in defending the maritime borders of the homeland.

Syeda Batool Fatima, a resident of Karachi, was diagnosed with bone marrow cancer about a year ago

Zahra said her daughter’s condition is getting worse day by day and she needs immediate help. PHOTO: EXPRESS

KARACHI: Fighting bravely against deadly diseases such as bone marrow cancer, a seven-year-old girl on Monday appealed to Prime Minister Imran Khan and Army Chief of Staff (COAS) General Qamar Javed Bajwa to help him win a battle for the rest of his life.

Syeda Batool Fatima, daughter of Syeda Kulsoom Zahra, is a grade-1 student at a private school in Karachi. He lives with his mother in a two-bedroom apartment in the FC area of ​​the city in the Liaquatabad neighborhood.

The girl fell ill after suffering a fever about a year ago. How shocked his parents were, several test reports revealed that the little girl had bone marrow cancer. 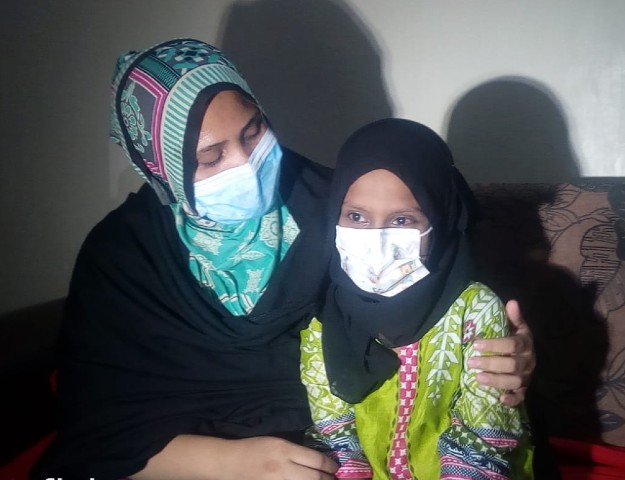 The mother said they had spent everything on caring for their daughter and now they have nothing left. PHOTO: EXPRESS

Speak to The Express TribuneZahra said that he has three children whose girl is the oldest. Her husband is a lower class government employee, he added.

“My daughter has to have a blood transfusion every week and her condition is getting worse day by day. He almost lost his immunity. At any time, he starts bleeding from any part of the body, “said the mother.

According to doctors, the girl needed a bone marrow transplant as soon as possible which was possible in the United States, China, and several other countries but needed very large numbers.

“We have spent everything we have for treatment. We have nothing left to save our daughter’s life, “the mother exclaimed, describing her helplessness.

Zahra appealed to PM Imran to save his daughter’s life and make arrangements for his treatment.

Sitting next to her mother, Syeda Batool Fatima said that despite suffering from bone marrow cancer, she wanted to study and play with her siblings. 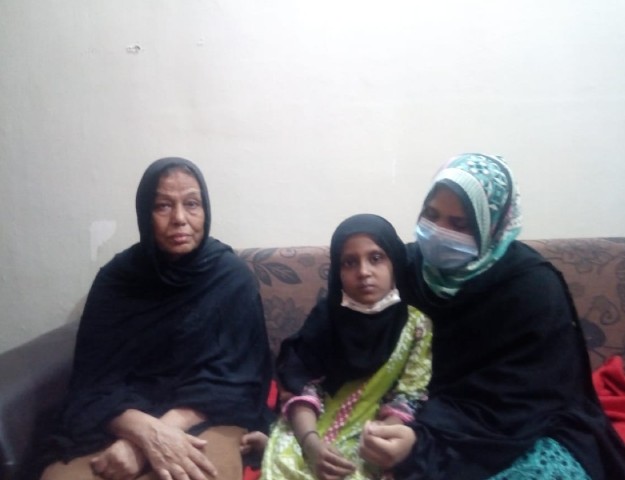 Grandma Batool said they don’t need money. They begged only to save his daughter’s life. PHOTO: EXPRESS

“Prime Minister Imran Khan’s uncle and Army Chief General Qamar Javed Bajwa uncle, please ask me to be treated so that I can live longer. I will thank you,” Batool pleaded.

The girl’s grandmother, Syeda Shamim Begum, also urged the prime minister and chief of troops to look after his grandchild. “We don’t need money; we urge you to help save the lives of our girl. The medicine might be abroad. Please help us.”

He also appealed to the benefactors to help them in their struggle.