KARACHI: The Supreme Court has kept the Sindh government from creating third party interests or constructing any type of building or structure on two vacant lots until the issue of expanding the SHC building and parking spaces for lawyers and plaintiffs is resolved.

The interim order comes at the request of the Sindh High Court Bar Association for the expansion of the high court and the allocation of further space to park lawyers and plaintiffs’ vehicles.

The bench of three SC members, led by Supreme Court Chief Justice Gulzar Ahmed, was informed that there were two empty plots on the left and right of the SHC building in Karachi and the Sindh government was planning to build a Sindh Secretariat block there.

The Court observed that the current SHC building in Karachi had become unable to accommodate the power of seated judges and saw an increase in the power of SHC judges in the future, there was no room for expansion within the building in Karachi; Instead, the expansion must be carried out on the available land, which is located on the right and left side of the building. The court observed that the parking problem for lawyers and claimants was also manageable.

The court observed that it was clear that the SHC in Karachi could not be moved from where it is now and that vacant land around it was the only option in which a new SHC building block in Karachi could be built and provision of vehicle parking for lawyers and plaintiffs to be created.

The Court observed that there appeared to be no choice but to retain the two parcels of land on the right and left of the SHC building for further expansion and in this case the Sindh government had to fulfill the constitutional mandate for this provision. The court, meanwhile, prohibited the Sindh government from creating third party interests or constructing any type of building or building on two parcels of land near the SHC building until the issue of expanding the SHC building in Karachi as well as parking lots for lawyers and plaintiffs was resolved.


Wassim Mukdad have firsthand experience of what it means to be at the mercy of an arbitrary state. He was repeatedly beaten and abused at the notorious Al-Khatib prison. The Syrian musician fled to Germany, so did the journalist Luna Watfa, who was also detained. Both of them are now putting their hopes in the Koblenz High Regional Court.

Currently considering the guilt of the Syrian torturer – a case without the direct involvement of the Germans. The basis of the trial is the Principle of Universal Jurisdiction, according to which crimes against humanity are punishable worldwide. The court sentenced the torturers to four and a half years in prison. 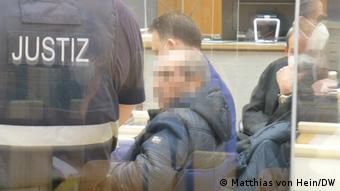 Now Anwar R. is on trial. He is a former prison director, who also fled to Germany and, as the main defendant, now has to justify his actions. Several victims of Syrian state torture attended the trials on site – as joint plaintiffs or as journalists.

They told DW reporter Viktoria Kleber how much they were still suffering from their experiences, and what they hoped the Koblenz trial would achieve.

A member of the Philadelphia City Council and Italian American groups sued the mayor’s government in federal court over the decision to change the name of the city’s Columbus Day holiday to Indigenous Peoples Day.

PHILADELFIA – A member of the Philadelphia City Council and Italian American groups sued the mayor’s government in federal court over a decision to rename the city’s Columbus Day holiday to Indigenous Peoples Day.

The lawsuit filed Tuesday stated that while both groups deserve recognition, Mayor Jim Kenney “should not take action discriminating against Italian Americans to exalt other ethnic groups in its stead,” reported The Philadelphia Inquirer.

Plaintiffs, including Board Member Mark Squilla, alleged that Kenney’s recent executive order to rename the October holiday fits a pattern of discrimination by the mayor against his Italian-American constituency, which they say should be designated a protected class.

Also cited are attempts to remove a statue of Christopher Columbus from south Philadelphia and last year’s removal of a statue of former mayor and police commissioner Frank Rizzo from outside a city service building near City Hall after being the target of protests.

After the Rizzo statue was removed, protesters gathered at the Columbus statue at the Marconi Plaza statue and protesters also arrived. The groups clashed for days before the city covered the statue with a wooden structure and announced plans to seek its removal.

Many Italian Americans have embraced 15th-century explorers – once hailed as American inventors – as cultural heroes, but not all agree. Cities across the US have observed Columbus’ legacy in recent years, accelerated by protests against racial injustice that began the final sprint after George Floyd’s death.

When ordering the vacation name to be changed, Kenney said in a proclamation that Christopher Columbus’ story was “very complicated”, adding that the explorer “enslaved the native population, and punished individuals who failed to fulfill the services it expected through violence and, in some cases, murder.”;

Philadelphia is not the first city to remove the name Columbus from an October vacation to recognize Native Americans – Los Angeles, Denver and Austin, Texas, were among the switching municipalities.

Back in Philadelphia, the plaintiffs also accused discrimination in prioritizing neighborhood designations for the distribution of the coronavirus vaccine, something the city says is a region and target group with low vaccination rates.

On Tuesday, Kenney called the lawsuit a “useless political tactic” and said it would “waste valuable resources as we try to tackle a devastating pandemic and work to build safer and fairer cities for all residents. . “


LAHORE: The district court and additional sessions on Tuesday adjourned hearings until April 13 over a request filed by NA Opposition Leader Shahbaz Sharif seeking an initial trial of defamation suit against PTI Chairman Imran Khan. Shahbaz stated that Imran Khan started making false and malicious statements against him and that the latter offered Rs10 billion to the former through an ordinary friend in exchange for withdrawing the pending Panama Papers case before SC.


LAHORE: The district court and additional sessions on Tuesday adjourned hearings until April 13 over a petition filed by NA Opposition Leader Shahbaz Sharif seeking a preliminary hearing on the defamation suit against PTI Chairman Imran Khan waiting before the court for three years.

As per the defamation suit, Shahbaz stated that Imran Khan started making false and malicious statements against him and that the latter offered Rs10 billion to the former through an ordinary friend in exchange for withdrawing the Panama Papers case awaiting in the Supreme Court.