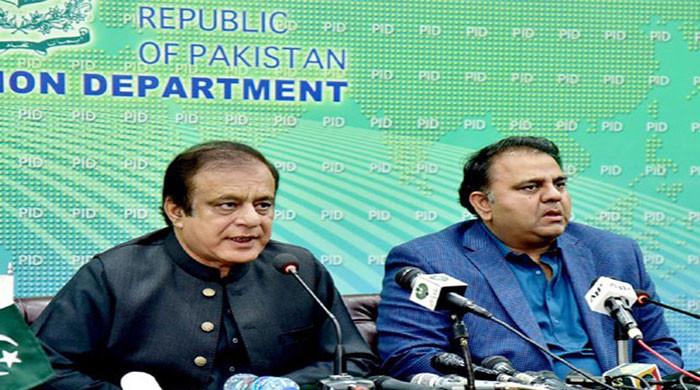 ISLAMABAD: Pakistani Senator Tehreek-e-Insaf Shibli Faraz on Friday congratulated Fawad Chaudhry on his appointment as Minister of Information and Broadcasting. Shibli Faraz, in a tweet, said he would continue to support Fawad on initiatives started by him at the ministry during his tenure as information minister. He thanked Prime Minister Imran Khan for entrusting him to the Ministry of Science and Technology, which had great potential. He also thanked all media owners, CEOs, bureau chiefs, news directors, television news anchors, reporters and beat journalists for their cooperation during his tenure as information minister.

ISLAMABAD: Federal Minister for Science and Technology Fawad Chaudhry said on Tuesday that the government’s sending home narrative had been completely buried after the collapse of the Pakistan Democratic Movement (PDM).

Briefing media people after the federal cabinet meeting, chaired by Prime Minister Imran Khan, the minister recalled predicting that the alliance was not based on any ideology and was meant for small gain and therefore would not remain intact for long.

He said that currently the PDM has become a legacy from the past, so the opposition must end the politics of resigning from the assembly. He said, because PPP had an interest in the system, it was against the resignation and PMLN and JUIF should also reconsider their future strategies.

The minister said five of the eight parties that make up the PDM have no members in the DPR. Therefore, the government wants to talk with PMLN, ANP and JUIF about reform – particularly electoral reform, said Fawad Chaudhry. He added that the opposition parties might give their package on this issue and the government will hold talks with them. Regarding the development of Jahangir Khan Tareen, the Minister of Finance admitted that he was an important leader of PTI and had relationships with people who would definitely leave if invited by him (JKT). “There is no such problem,” he said.

Fawad Chaudhry said Tareen was not alone in facing cases. Ministers, including Abdul Aleem Khan and Sibtain Khan are facing cases, being jailed, getting bail and fighting cases while Babar Awan also resigns and returns, he said. Regarding inflation, the minister claims that there is already a downward trend in sugar and flour prices while sales at Utility Stores touched Rs1 billion – which is unprecedented – and this year, Utility Shop Companies will become a sustainable entity.

On the issue of reshuffling in the federal cabinet, the minister said the process was in the final stages and it was Prime Minister Imran Khan’s prerogative under Article 90 of the Constitution to decide their ministers and ministries. Fawad Chaudhry said the cabinet digitization process was complete and would help save Rs510 million per year. He said that starting next week cabinet members will get tablets and agendas will be distributed digitally. He said he would ask the chair of the National Assembly and the chairman of the Senate to speed up the paperless proceedings in the two houses as quickly as possible. He said the cabinet was briefed on the current COVID-19 situation by Planning Minister Asad Umar. The Cabinet was told that in the third phase the number of critical patients was 4,200, far more than in the previous phase. The planning minister informed the cabinet that the next two weeks were very important and precautions were very important. Sindh and Balochistan have the highest ratio, members say.

He said a cabinet logistics committee led by Ali Zaidi had been formed regarding the import of the coronavirus vaccine. The Cabinet, said Fawad Chaudhry, also approved the establishment of the Central Business District in Lahore which will consist of two projects – the 350-hectare Walton Road project and the 270-hectare Wahdat Colony project. He said work on the public-private partnership project would start in 18 months. The Cabinet gave approval for the creation of a Registration and Protection Authority for the registration of mangoes and oranges. Likewise, precious stones will be registered by the Minerals Development Authority.

He said the succession certificate used to be a big problem for Pakistanis overseas because they had to come to Pakistan and get the same from the court, but now the Nadra system will be installed in the embassy for the issuance of succession certificates. The minister said that the cabinet gave its approval of the proposals that the Lawyer Facilitation Center in Islamabad and the Capital Development Authority would build this building. Fawad Chaudhry said business rules have been changed to empower ministries so they can make decisions on their own.

The Cabinet approved the part-time budget strategy paper, which was presented earlier. The Cabinet was informed that exports had reached $ 18.7 billion while last year it was $ 17.4 billion. Imports worth $ 39.5 billion were recorded this fiscal year while last year’s totaled $ 34.5 billion. He added that remittances had reached a record $ 21.5 billion, which is a testament to the confidence Pakistanis abroad have in the leadership of Prime Minister Imran Khan. The minister said that large-scale manufacturing had reached $ 7.9 billion this year. The minister noted that the economic growth has reached the three percent mark which will reach 5.1 percent in 2023-24. Fawad Chaudhry said the current foreign exchange reserves were sufficient for three and a half months. He said in the upcoming Public Sector Development Program (PSDP), special additions would be made and salary disparities would be resolved. The minister said the Zaireen Management policy and reduced student visa fees were also approved. The forum also approved the creation of a registration authority to obtain geographic indicator marks for Pakistani agricultural and non-agricultural products to maintain their Pakistani identity. He said geographic indicator labels for Pakistani mangoes, precious gems and other products would be obtained for their protection as Pakistani products in the international market.


ISLAMABAD: Federal Minister for Science and Technology Fawad Chaudhry said on Sunday that Maryam Nawaz’s politics had limited PML-N to only in central Punjab. He said that PML-N and PPP were immature political parties. Speaking to the media, the federal minister reacting to internal differences between members of the Pakistan Democratic Movement (PDM) saying that previously they were against Prime Minister Imran Khan and now they are fighting each other. “Half of the political parties in PDM support PML-N while the other half support PPP,” he added. The federal minister also claimed that Punjab Chief Minister Sardar Usman Buzdar enjoyed the full support of Prime Minister Imran Khan.

ISLAMABAD: Federal Minister for Science and Technology Fawad Chaudhry said Thursday the federal cabinet is not discussing changes in its composition, because that is purely Prime Minister Imran Khan’s prerogative.

“Whenever, he finds it appropriate, he will make changes in the cabinet,” he said in response to questions during a media briefing on the federal cabinet decision.

Fawad said the media should know that the ECC consists of economic experts, while the federal cabinet consists of politicians, representatives from the Ministry of Foreign Affairs and financial experts.

“Maryam Safdar’s silence is not a good thing. Hopefully the cabinet will listen to people like us this time, ”he said when asked if he would come back against giving him any relief, as he did in the case of Nawaz Sharif.

Referring to the coronavirus, Fawad said the two waves of the pandemic had been successfully contained and efforts to combat the third wave in the same way were appreciated globally.

He admitted that this third wave had an impact on many people and this time the government also wanted to handle it in an organized manner, as had been done before.

He said 98% of Pakistanis will get the free vaccine, which will be imported by the government itself or through donations, while 2-3% of people, who don’t want to queue up will be vaccinated for a fee.

He said the Russian vaccine price dispute was ongoing at the Sindh High Court, while the Chinese vaccine price had been set at Rs4,225.

After the Sindh High Court’s final decision, Sputnik’s price will also be set, he said, explaining that the prime minister’s main focus is so that the people are not made to pay exorbitant prices.


LAHORE: Federal Minister for Science and Technology Fawad Chaudhry said on Saturday that in the government’s view, the opposition Democratic Movement of Pakistan (PDM) is “dead” and now all alliance parties will be approached separately for reform.

Speaking with reporters here, Chaudhry was referring to the previous day’s election of Yousuf Raza Gilani, of the PPP, for the seat of the opposition Senate leader, which sparked the PML-N’s anger. Government ministers have long predicted the PDM’s “doom”, with the likes of Sheikh Rashid, Shibli Faraz, Shahbaz Gill and others highlighting their differences.

Chaudhry said the way the Senate elections were held was visible to everyone. Opposition parties could “avoid humiliation” if they accepted Prime Minister Imran Khan’s offer for electoral reforms.

Chaudhry said now “the politics of resignation has ended and the politics of reform has begun”. While criticizing the Pakistan Muslim League-Nawaz (PML-N), the minister said Pakistan would not operate “as Maryam Nawaz wanted” and claimed that “Nawaz Sharif took all his money to London”.

The federal minister went on to say the opposition parties must overcome their “Imran-phobia” and focus on their “shortcomings”. “PML-N is a big political party, but now it is led by children,” he added.