ROME: Italy will host the opening matches of the European Championship as planned with the crowd at the stadium, according to Italian Football Federation (FIGC) president Gabriele Gravina.

The tournament, which was postponed last year due to the coronavirus pandemic, will kick off at Rome’s Stadio Olimpico on June 11 when Italy host Turkey.

“I am sure we will open the European Championship in Rome and we will do it with the stadium crowd,” Gravina told a news conference on Friday.

“I still don’t know how many spectators there will be, but there will definitely be a crowd.”

Italy is one of 12 host nations across Europe, and plans for a month-long tournament to go ahead as originally planned have been called into question as COVID-19 continues to spread.

European football governing body Uefa said after a meeting with host nations in January that it had moved the deadline for the federation to submit plans to house fans on the pitch until early April.

“We have invested two years of hard work and we are confident that on April 7 we will have some feedback to pass on to UEFA, who will not be able to ignore it,” added Gravina.

The FIGC announced on Friday that Italy had arranged Euro 2020 warm-up matches against San Marino and the Czech Republic.

Cagliari’s Stadio Renato Dall’Ara will host both matches, with the Azzurri taking on San Marino on 28 May before the match with Czech on 4 June.

Italy face Euro 2020 Group A rivals Turkey, Switzerland and Wales in Rome, while the Italian capital will also host the quarter-finals.

PCB management will now look at operational and logistical challenges

LAHORE (Dunya News) – Following the sudden suspension of the 6th edition of the Pakistani Super League (PSL) after seven cases of COVID-19 were reported, the 2021 season will resume once again in June with the remaining matches to be played in Karachi.

This was unanimously agreed by the six franchisors and PCB in a virtual meeting held on Thursday afternoon and after considering all factors relating to the organization of the event.

June emerged as the most preferred and practical window due to the international commitments of the Pakistan men’s national cricket team in March / April and the end of August / September.

The remaining 20 games in June are now being planned following the return of the men’s national cricket team from Zimbabwe on 13 May and before their departure for England on 26 June.

PCB management will now look at operational and logistical challenges and return to franchisors and stakeholders.

The tournament was rocked by a series of COVID-19 cases with the governing body confirming on March 4 that three unnamed players from two different teams had tested positive for the disease.

Only 14 matches were completed in 34 tournament matches.

ISLAMABAD (Dunya News) – Prime Minister Imran Khan Thursday hosted a lunch for Pakistani senator Tehreek-e-Insaf (PTI) and his allied parties as the government plans to get Sadiq Sanjrani elected as chairman of the Senate.

On the other hand, PM Imran Khan nominated Mirza Afridi, who represents former FATA, as deputy chairman of the Senate. Federal Information Minister Shibli Faraz confirmed the news in a tweet.


Newstalk breakfast presenter ZB Mike Hosking said the Prime Minister was “running for the hills” and has no backbone after Jacinda Ardern canceled his regular weekly interviews with him.

Instead, Ardern said he and other ministers would now appear on the country’s best-performing commercial radio show “when and when problems arise”.

Hosking said Ardern was “running into the hills” and the government was “too held to account”.

“He no longer wants to be on the program every week. The rather tragic conclusion that is drawn is the question he gets, the demand for a degree of accountability … [is] it’s kind of difficult, “Hosking told the audience this morning.

“They have just been held accountable.

“Without being too harsh to some of the other players in this market, the reality is that the Prime Minister enjoys a friendlier and more obedient relationship with them. The question is more softball in nature, he prefers a more benign tone where shipments can be sent across borders more easily. without a clear chance of appeal, “he said.

“After all he, and all his ministers, will continue to appear on the show as and when problems arise.”

Hosking told listeners this morning: “To be honest, I am happy. There are not too many management here. They think accountability is important. And they are right, but what I argue. [is] PM is a person who is light in answering tough questions.

“How many times has she appeared on the program without the knowledge of the questions I am asking is scary.

“When I asked if they would replace the Tauranga City Council, he replied ‘they don’t do things like that’, clearly not having the slightest hint that they would in a month or so be doing that to be comfortable.

“The reality is, all too often, it’s just noise, it’s waffles, it’s stalling, it’s filling, it’s confusion. She has to be prepared for it. It shows a lack of backbone that she wants to save and run for. It also speaks to her increasingly clear nature: they didn’t handle the pressure well. I couldn’t sleep, I’m just a little disappointed he’s not a tougher operator. “

“Shame PM doesn’t have time for Newstalk ZB on Monday morning. All those tough questions …” he wrote on Twitter.

Shame PM didn’t have time to @Bayu_joo on Monday morning. All those tough questions …

Ardern’s decision to quit his regular slot with Newstalk ZB is a bold move, with the regular segment airing for more than 30 years.

Paul Holmes of Newstalk ZB was the first regular segment host with the New Zealand prime minister, interviewing various leaders on the show over the years starting in 1987.

David Lange was prime minister at the time the segment started.

However, this is not the first time a prime minister has refused to appear regularly in the New Zealand broadcaster segment.

In 2011, John Key repeatedly turned down a number of interview requests with the RNZ Morning Report.

The Prime Minister’s Office was contacted for further comment.

For its sixth year, Shaan-e-Pakistan has introduced its first Fashion Summit. Attended by anyone from the Pakistani fashion industry, the event takes place in Karachi on Friday with discussions around how to get big in an industry that is almost non-existent and how it is changing after the ongoing pandemic.

The CEO and founder of Shaan-e-Pakistan, Huma Nasr, began by talking about a journey he took six years ago. “It becomes an unforgettable memory,” he said. “We started with a very small team and now, we have a full house! However, this is our first time hosting a fashion summit and it is time for us to have a discussion about the industry. We need to have a discussion about what’s going on behind the scenes.”

Nasr, explaining the importance of the fashion industry, added, “Fashion should be more important than sport. The disadvantage is that it is not explored enough. We need to talk about it more.”

In the first session, the panel – consisting of designer Huma Adnan, Humayun Alamgir, Sadaf Malaterre, and senior journalist Maliha Rehman – discussed the struggle to be big, the ins and outs, with host Anoushey Ashraf. “We all have our struggles,” Adnan began. “For me, it’s about the big transition from being a full-time banker to marrying an established designer. When you live with so much creativity around you, it is only natural to think of starting your own brand.”

Recalling an anecdote, Adnan shared that after a trip to Florence, he realized the shortcomings of Pakistani fashion. “I came back and started my own label, Fnkasia. It took me a while to be where I am now, but I love to struggle. I’ve always been.”

“Over the last 10 years, we have improved a lot and that too, positively,” commented Alamgir. “The place where I started is very different from where I am now. The industry has gone through a big transition. The struggle is there, we still have a way to go.”

Malaterre, known for his eccentric palette, recounts that he was initially told that he would not make it because people would not understand his style. “I was told that what I was doing was very strange and different,” he said. “But I’ve always maintained my aesthetic. I’ve always believed what I’m doing will be successful, so yeah – it’s still a struggle.” The couturier added, “But it is always very interesting to see how your vision comes to life; the way your thoughts are translated to the rags by your kaarigars. It is pure joy.” 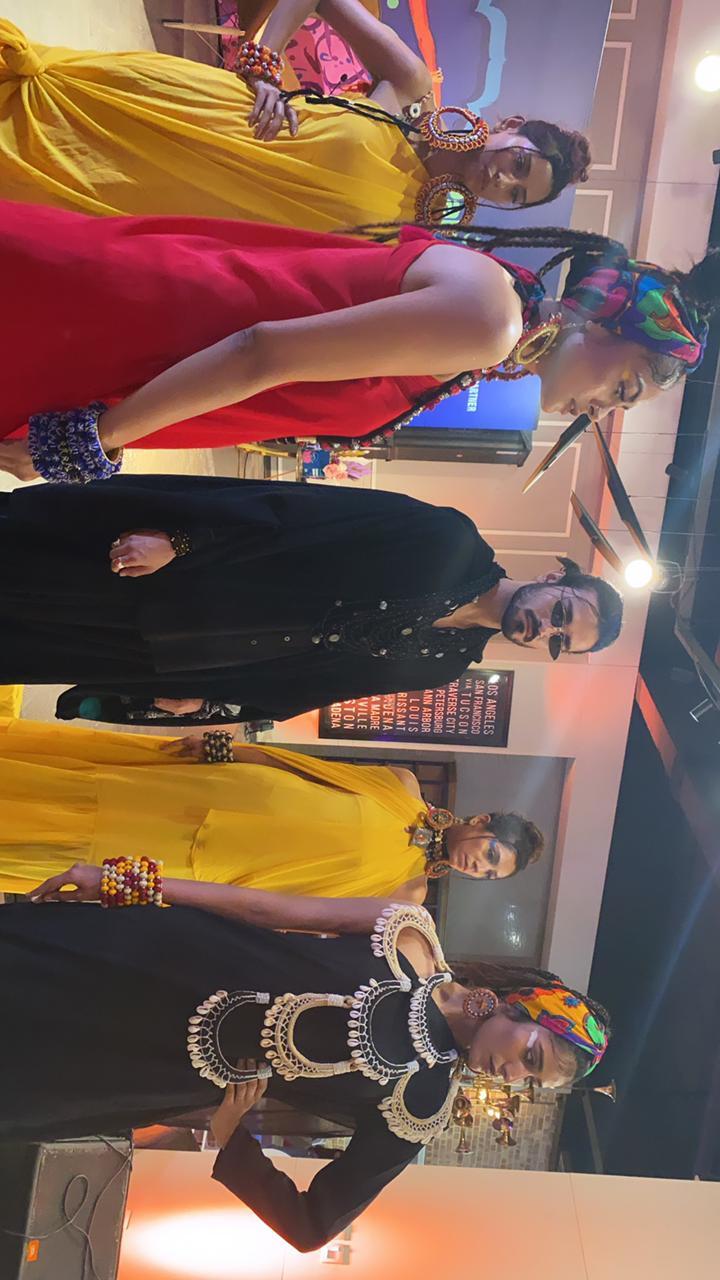 The summit also discussed the pros and cons of living in a technologically advanced world. “Everything is at your fingertips,” commented Adnan. “It has pros and cons. Yes, thanks to the website and social media, our sales have skyrocketed, but it’s an uphill task to keep negativity from happening. Most of my work is being sold on social media.”

Talking about the same, celebrity stylist Tabesh Khoja alias Khojii argued, “Young people are always on Instagram. The world has been compressed into telephony via social media. This is absolutely a necessity of the moment.” However, he also shared that thanks to the same media, there is so much competition that talent becomes saturated. “Everything is fake. You could easily pay someone Rs10,000 and they would compliment your work and show it off. No more authenticity left.”