The green shrubs growing in the mountains of central Afghanistan are causing major problems for those struggling to stop methamphetamine on the roads in Australia, experts say.

The ephedra plant, known locally as oman, was previously only used for firewood.

But now the drug is being carried across the Afghan border to Iran where the drugmaker is extracting ephedrine, the main precursor chemical used in medicinal ice.

Since 2018, there has been a boom in ephedrine extraction operations in the region, leading to increased methamphetamine production, said London School of Economics researcher Alexander Soderholm.

“You have a huge oversupply of methamphetamine in Iran, which they are trying to transfer to consumers globally, says Soderholm.

“Australia is, of course, one of the most lucrative consumer markets for selling methamphetamine.

“The prices are very high, hundreds of times higher than street retail prices in Iran.”

While the closure of the COVID-19 border may have dampened human drug trafficking efforts, Soderholm and the Australian Federal Police (AFP) say crime groups have adapted to using air and sea transport to smuggle goods across borders.

In Australia, federal police say there has been a large increase in shipments of methamphetamine from Iran that have been intercepted in recent years.

In January, two men were indicted on suspicion of importing 250 kilograms of the drug, worth an estimated $ 187 million. AFP said the drugs were hidden in kitchen table deliveries.

Last year, packages of “bottled water” imported from Iran were seized in NSW and found to contain $ 80 million worth of liquid methamphetamine.

Commander Hunter said six victims had been “drawn into a scheme” in which they believed they imported products such as hand sanitizer, shampoo bottles, light fixtures and photo frames under legitimate business deals.

Commander Hunter said victims had been paid up to $ 30,000 to accept imports and kept them until members of a locally based crime syndicate had collected the items.

In one case in 2018, a 52-year-old man was recruited via Whatsapp by someone he believes to be a religious leader in Iran.

“There have been a number of car paint shipments that turned out to be genuine, without narcotics in them.

“Then, finally, one with methamphetamine in it [arrived], “Said the Hunter Commander.

After the man spoke to the police and handed over the tainted product, Commander Hunter said the victim got a knock on the door from members of a local drug gang.

Kam Razmara, a committee member from the Australian Iranian Society of Victoria, said his group had not heard of the fraud until police issued a press release last week.

Mr Razmara and others fear the recent drug cases, in which relations to Iran have become publicized, will unfairly tarnish the Iranian community in Australia.

Mr Razmara said the organization had good relations with the Victoria Police and he hoped that in the future the AFP would contact so they could cooperate and educate members of the public.

“If they contact us and get engaged to us, we can work much more proactively with them,” said Razmara.

“We have a Facebook group with 6,000 odd members who communicate in Farsi, and of course if we are approached, we will publish it in Farsi and English.”

Melbourne lawyer Ensieh Bayat said members of the expatriate community are often victims of fraud because of their sense of obligation to help relatives or colleagues in their home countries.

“If it’s part of the business, you should check if they’re a reputable business. Many of our clients have a hard time telling the difference.”

Make use of the weakest link

For the authorities, finding the head of a foreign drug syndicate remains a challenge.

Commander Hunter said AFP was working closely with partners in Turkey and the United Arab Emirates to target drug trafficking from the Middle East, but it was a “very difficult question” to answer who sits at the top of the crime syndicate.

Mr Soderholm agrees. He said it was likely that corrupt state officials and legitimate businesses would assist criminal organizations to transport drugs from Afghanistan to Iran, and then to other regions.

“We will see a continuation of innovation,” he said.

“These groups will always exploit the most vulnerable or weakest link in the listed supply channels, but also in terms of the people in the community, who are vulnerable to exploitation.

“It is rare globally that the organizer or top level leader of this network is jailed.

“Most of the people jailed for drug-related crimes are drug users, and low-level drug dealers or dealers.”

A view of Monday’s trip, motorists encouraged to stay off the roads | RiverBender.com.


The Atlantic Depression left many parts of Germany with a slippery and slippery path weather warning on Monday. Forecasters say this frosty winter period is almost over.

The Kachelmann weather service recorded the lowest temperatures this season in the village of Kühnhaide, on the German-Czech border, Sunday evening.

That record low temperatures of minus 28.9 degrees Celsius (-20 F) are unofficial, as they were not picked up by the German Meteorological Service (DWD), whose network does not cover villages.

Weather service Kachelmann announced the temperature on Twitter, reporting: “Depression was cold last night, again in the east with some -20s. In Marienberg-Kühnhaide in the Erz mountains, at least -29 degrees, the coldest night this winter.”

DWD recorded the lowest temperature for the current winter on February 10, when it dropped to -26.7 degrees in Mühlhausen-Görma, r in the eastern state of Thuringia.

Many Germans took to the frozen lakes and rivers over the weekend despite police warnings.

A police helicopter circulates Berlin to clear the ice. Several hundred people reportedly walked to Müggelsee lake, ignoring calls to vacate the area. However, domestic media also questioned the proportionality of a police helicopter hovering low over the scene and kicking up clouds of snow and ice among the crowd. 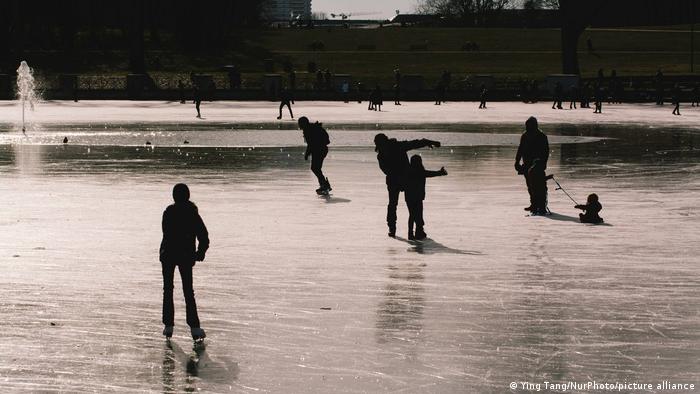 About 2,000 people were lured to the frozen part of Lake Constance in southern Germany, on the border with Switzerland.

Meanwhile, Bavarian emergency services had to warn people on Monday about the risks of breaking thin ice.

Their wind is ‘changin’

The weather forecast projects that cool snap will last a week, with rain replacing snow in some areas and temperatures rising back above freezing. 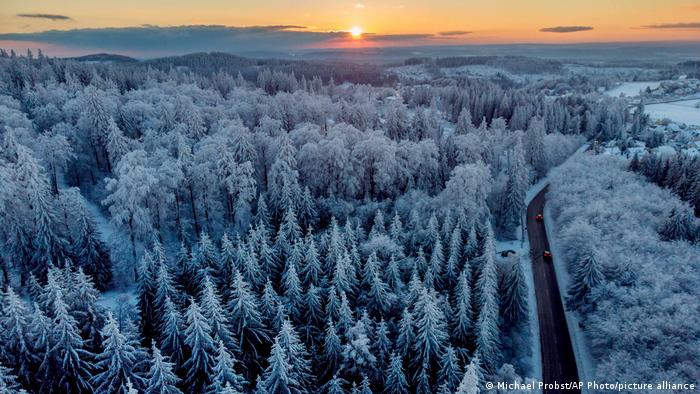 Warmer weather will return soon, according to German forecasters

“The weather situation will change just as the week starts,” DWD reported on Monday.

The Atlantic temperatures that have turned Germany to ice are coming to an end, and experts estimate temperatures of up to 13 degrees Celsius in the hottest parts of the country in the coming days.

Download Weather Photos / Video School Closures / Delays RELATED: DFW Weather: Historic Winter Storm Brings Heavy Snow and Dangerously Cold Temperatures DALLAS (CBSDFW.COM) – If you have to hit the roads Monday in Dallas, the Department of Public Works has 32 sanding truck that will run non-stop until Monday night. They will focus on streets, bridges, slopes and slippery areas of the roadway reported by residents of 311. Twenty-eight more trucks are on standby and ready to go if conditions worsen. If the DART rail line is your primary mode of transportation, you will need to find an alternative. For the safety of customers and employees, services are suspended until Wednesday. RELATED: Statewide of Texas on Winter Storm Warning, Federal Declaration of Emergency Approved “Frozen switches, frozen passenger doors are the big concern,” spokesman Gordon Shattles said. “If we have to shut these things down, the last thing we want is a passenger staying on a platform in this weather. DART will maintain its bus service, but will operate on a Saturday schedule with limited service on routes 63 and 362. In addition, it will offer 14 additional shuttle lines. “We want to make sure people stay warm while they wait for their buses, so we have reopened the transit centers,” Shattles said. As for air travel, if you have a flight tomorrow, check with your airline ahead of time for its status and give yourself extra time to get to the airport.MORE: The First Chill Warning wind turbine issued for North Texas We are already seeing hundreds of delays and cancellations of flights to and from DFW Airport and Dallas Love Field. .