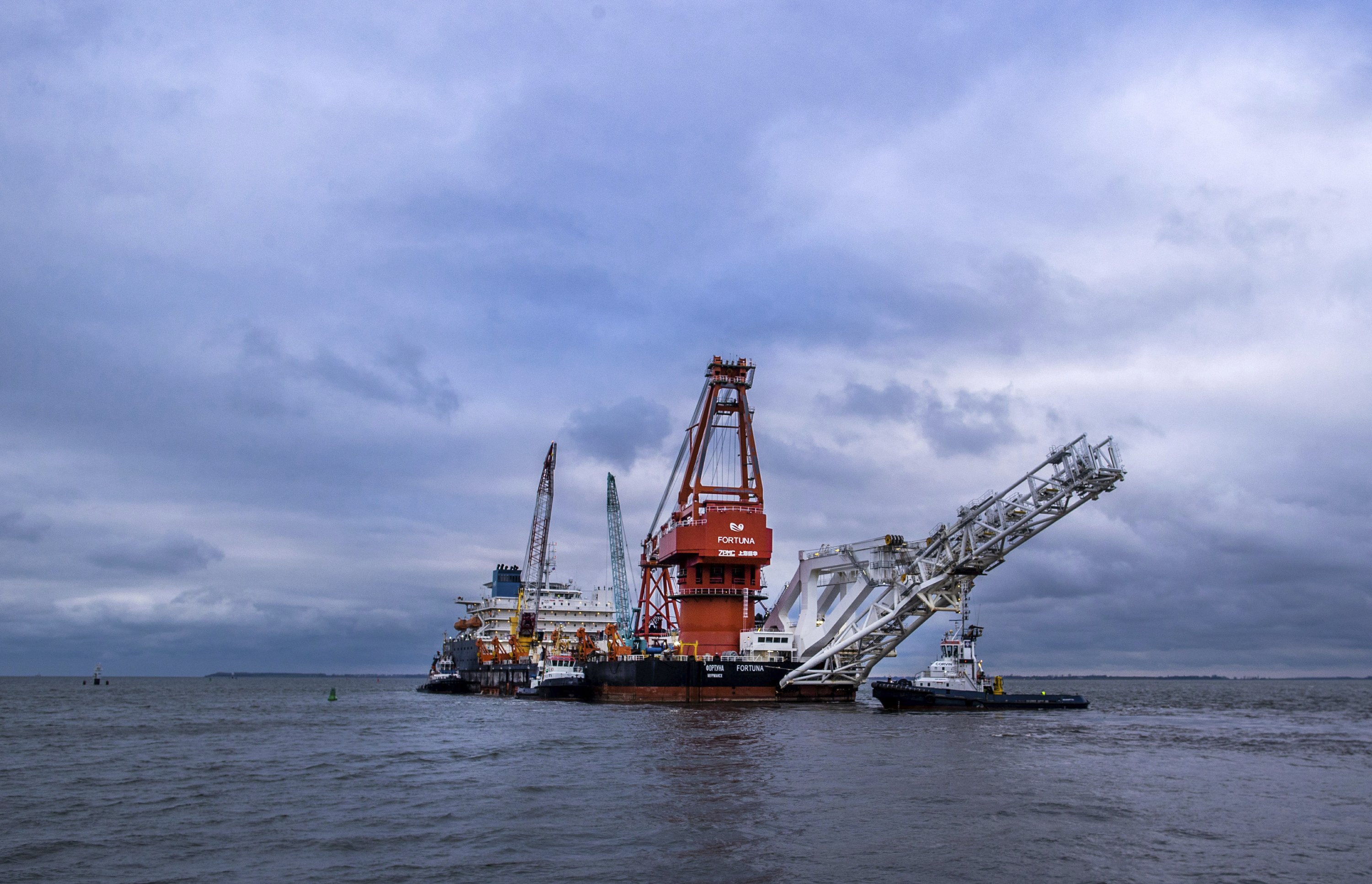 BERLIN (AP) – German authorities on Friday granted permission to continue work on a submarine pipeline carrying natural gas from Russia that is the target of US sanctions threats.

The decision by the Federal Maritime and Hydrographic Agency could be appealed, meaning there could be another halt to construction of the Nord Stream 2 project, which has drawn heavy criticism from the United States, several other European countries and environmental groups.

The US government argues that the Baltic Sea pipeline will make Europe more dependent on Russian gas and hurt Europe’s energy security. The Kremlin responded by accusing Washington of trying to promote sales of its own liquefied natural gas.

The pipeline project has also been opposed by President Barack Obama’s administration, and German officials say they don’t expect significant changes in US policy when President-elect Joe Biden takes over from President Donald Trump.

German Foreign Minister Heiko Maas told reporters on Friday, however, that he expects high-level talks with the upcoming government on possible new US sanctions against companies involved in the pipeline project.

“Of course we would like to discuss this topic with our colleagues in Washington as soon as the new government takes office,” he said.

Maas added that he did not yet know whether the company involved in the pipeline construction had plans to immediately resume work following a decision by the Maritime Affairs and Hydrographic Agency.

Russian state-controlled natural gas company Gazprom has positioned a ship to resume work on a multibillion pipeline, which was suspended after a Swiss company pulled its ship out of the project amid threats of US sanctions. Since Russian ships were of a different type from Swiss ships, Germany had to issue a new authorization.

Gazprom said 6% of the pipeline, or about 150 kilometers (93 miles), remains to be completed.

Environmental activists have expressed outrage at a recent move by Germany’s Mecklenburg-Western Pomerania state government to protect companies involved in the pipeline project from US sanctions by creating a basis for “climate protection.”

“Nord Stream 2 is a geopolitical error and must stop,” said Green party MP Katrin Goering-Eckardt. “We need investments in real climate protection and renewable energy instead of a fake foundation whose chair Nord Stream 2 will appoint.”

The company, which is wholly owned by Gazprom, declined to say exactly when construction would resume.

President-elect Joe Biden will no longer take an Amtrak train to Washington until inauguration day next week, according to a person familiar with the plans. It is not yet clear how Mr. Biden will get to the inauguration. As of Tuesday, Biden’s team was still planning the train arrival event, CBS News was told. But the sudden change in plans came as the president-elect was briefed on Wednesday by the Federal Bureau of Investigation and the Secret Service of the security concerns surrounding the day of the inauguration, following the attack on the Capitol on January 6. A spokesperson for Biden’s inaugural committee declined to comment on the change in plans. “The team is working with the current administration to get as much information as possible about the threat’s image and the preparations in place to deter and defend against disruption or violent attacks,” the team said on Wednesday. Biden’s transition team in a statement. . “The transition of power from one administration to another is a touchstone of American democracy,” the statement added. “President-elect Biden’s team will receive daily briefings on security and operational preparations to ensure the transition goes smoothly.” Biden’s arrival by Amtrak train would have reflected his decades-long journey to Washington from Delaware as a United States Senator. Biden was quick to brag about the millions of miles traveled by train over the years. CNN was the first to report the change in travel plans. A spokesperson for Biden’s transition confirmed to CBS News that Lisa Monaco, President Obama’s former homeland security adviser, will serve as the temporary homeland security transition adviser surrounding the inauguration. “Ms. Monaco will assist the President-elect and will work with the new National Security Advisor, the new Internal Security Advisor and current security and law enforcement officials, including with the state secret services “United, on their inauguration plans. Given the existing threats, Ms. Monaco’s temporary role will focus only on the period leading up to the inauguration,” said a spokesperson for the transition. Monaco has been appointed by Mr Biden to the post of deputy attorney general. The transition said Monaco “will suspend the activities and engagement related to his appointment as Deputy Attorney General. This is a time when everyone is ready, but the goal is to hand over quickly and transparently full accountability to the new Homeland Security Advisor and the team as soon as possible. ”The spokesperson also reiterated that the transition continues“ to push for prompt confirmation after the confirmation hearing of ‘Alejandro Mayorkas on January 19 “to be the next secretary for internal security. .


Image from stormed the US Capitol in Washington, DC, on January 6 sent shockwaves around the world. The theme of Thursday’s debate in the Bundestag – “On the Rise of the Capitol Storm: Strategies for Strengthening Democracy and the Rule of Law in Germany and the World” – shows that it extends to Berlin.

Many speakers warned that democracy and the rule of law were under threat. Secretary of State Heiko Maas, of the Social Democrats (SPD), called the Capitol, the seat of the US House of Representatives and Senate, “the heart of democracy”. He reminded lawmakers that, after World War II, the Federal Republic of Germany was established as a democracy thanks to the support of the United States.

“American democracy, with its famous checks and balances, withstood attacks,” said Maas, adding that German politicians should refrain from offering a correct assessment of the United States.

During Trump’s four years in office, the Alternative Nationalist Party for Germany (AfD) was the only party in the Bundestag to welcome his government. But even Deputy Gottfried Curio, known for his fiery speeches, condemned the unrest in Washington.

Curio also played down the attacks on the Capitol, referring to “escalating demonstrations”. He also said the attack could be used to illegally persecute the AfD in Germany. “The shocking images of the US were used to draw a very false comparisons which turned the German public against criticism of the government,” he said.

Curio’s speech was sharply criticized by Alexander Graf Lambsdorff, of the center-right Free Democrats, who pointed out that in late August the moves of the Reichstag, the German parliament building, were part of a demonstration against measures to prevent the spread of the coronavirus beforehand. the police prevented the crowd from entering.

Lambsdorff calls Germany’s AfD colleagues for conspiracy theories that have yet to accept the results of the 2020 US presidential election. “Paradoxically. The AfD is also the most anti-American party in Germany,” he said, “while admiring, like Donald Trump, the world’s autocrats.”

Lambsdorff, who has worked as a press attaché at the German embassy in Washington, also mentioned the second round in Georgia, which was won by Democrats Raphael Warnock and Jon Ossoff, who were elected as the first and first black senators in the Southern states respectively. Jewish Senator. “There was a time when I thought this would never happen,” he said.

Johann Wadepfuhl, of Chancellor Angela Merkel’s ruling Christian Democrats, said the historic relationship between Germany and the United States meant that the government had to offer its support to the future administration in the US.

Despite the frosty relations between the two countries during the Trump administration, Wadepfuhl said, German company BioNTech and US pharmaceutical company Pfizer have teamed up to produce the world’s first official COVID-19 vaccine. The two countries’ scientific partnership will continue, he said, even as Joe Biden must focus on stabilizing the United States during its first few months.

“Trump is not only jeopardizing the rule of law in the US,” said Wadepfuhl, “his failure to tackle the pandemic puts the entire structure of nature at risk.”

Except for the speakers from the AfD, the deputies expressed their relief at the end of the Trump era, and the fact that Capitol unrest had not spread.

Merkel herself said she was “both angry and saddened” by the riot pictures. But he also expressed optimism about the new presidency: “This democracy will prove to be much stronger than the attackers and rioters.”

This article is adapted from German.


In the aftermath of stormed the US Capitol, German Foreign Minister Heiko Maas called for a broad pro-democracy initiative spearheaded by Washington and its European Union allies.

“We are ready to work with the United States on a joint Marshall Plan for democracy,” Maas told German news agency DPA on Saturday.

The original Marshall Plan was a US economic campaign launched in 1948 to rebuild 18 war-torn Western European nations. West Germany, allied with the US, was among the biggest beneficiaries.

On Saturday, Germany’s Maas echoed worldwide condemnation of Donald Trump’s supporters who has breached the US Capitol building while MPs work to certify election results.

“We must not give room to the enemies of liberal democracy,” said Maas. “This applies not only to the US, but also here in Germany and Europe.”

European democracy depends on the US

Maas did not provide details on the idea. However, he did point to President-elect Joe Biden’s call for a network of democratic states. The German foreign minister also welcomed Biden’s pledge for political reconciliation in the US after Trump’s presidency.

The diplomat noted that France and Germany had launched an “Alliance for Multilateralism” in 2019, which has since developed into loose network in more than 20 countries, including Finland, South Africa, and Tunisia.

“Getting to the root of social divisions in our country is one of the greatest tasks for the future for Americans and Europeans,” said Maas.

He warned that “belief in cohesion, in democracy as the most humane form of government, and in the persuasive power of science and reason” can only be held together.

To achieve this, “there is no better, closer, more natural partner in the 21st century than America and Europe,” Maas told dpa.

In the course of last year’s US campaign, President-elect Biden came up with the idea of ​​a “global summit for democracy” during his first year in office. Biden will be sworn in on January 20.