Australia managed to clear the ODI Rose Bowl against New Zealand after winning 21 times in a rain-cut third match at Mount Maunganui.

Bad weather at the Bay Oval saw the match reduced to a 25-over tie, with Australia making it 7-149 at half-time.

The visitors then limited Pakis Putih to 9-128 to extend their world record winning streak to 24 games.

Australia went 0-73 out of 10 overs before losing seven goals cheaply to close the half.

Kasperek was a wrecker, crippling the Australian inning with a triple-wicket maiden on his way to the 3-24 mark.

He claims top scorer Alyssa Healy (46), was caught working hard for the long haul and made Ashleigh Gardner (1) stumble, before Rachael Haynes cut in for the golden duck.

Ellyse Perry survived a hat-trick but followed shortly after that only 13, with Meg Lanning (15) also unable to anchor the home innings.


The Sindh government announced on Wednesday that it would begin work on the proposed Red Line section of the fast bus service (BRTS) in Karachi in July this year.

The decision to effect this was reached at a meeting held at the Sindh Secretariat presided over by the Main Secretary of Sindh Syed Mumtaz Ali Shah. On this occasion, the Main Secretary also announced that the 250 buses that will operate on the Red Line BRTS will use biogas as fuel to keep their operations environmentally friendly.

The meeting was informed that a biogas plant would be set up in the Cattle Colony in the Landhi area of ​​the city and the factory would consume 3,000 tonnes of manure daily to produce fuel for the Red Line buses. The plant will provide 11 tonnes of compressed biogas per day for bus operation and the plant capacity will be further increased if there is more demand for fuel.

The initial feasibility of the Red Line project has been completed. The Asian Development Bank is set to build a mass transit project at a cost of $ 500 million.

A Red Line Corridor will be constructed from Malir Halt to the city’s Numiash intersection via University Road. A cycling path will be built along the bus line from Peoples Chowrangi to Safoora Chowrangi. The meeting was informed that it will be the third generation BRTS to be built in Karachi as it will also be used by public transport services of eight different routes.

The Sindh government will launch a restructuring program for the public bus industry in the city.

Current public bus operators will be given incentives under the program to sell their existing bus fleets and purchase new buses under the public-private partnership program to operate on these routes.

The Main Secretary said on the occasion that the use of bio-methane as fuel for the new buses operating on the Red Line will help reduce carbon emissions. He added that the project will provide travel facilities to 350,000 passengers every day. He explained that around 25,000 saplings will be planted along the Red Line. He directed all relevant utility service providers in Karachi to make adequate alternative arrangements to make way for the construction of the Red Line BRTS corridor.

Karachi is set for two very different concerts on Saturday night, but only one being held. Atif Aslam’s much-awaited concert at Benazir Bhutto Park was canceled after organizers “failed to get the necessary permits,” confirmed a post on Aslam’s official Facebook page. This is the story of the concert that has been through.

The upcoming action of Karakoram, Kashmir together with Battle of the Bands participants, Neon, ends the Covid-streak without a Karachi concert in District 19 in the Korangi Industrial Area. Backstage looks like an alumni dinner; even those who did not appear, such as Asim Azhar, Tamasha, and Auj, appeared to mark their existence and show gratitude for the live performance which finally progressed uninterrupted.

The crowd up front had started cheering the band up before they could even say ‘Hi’ and everyone wanted a part of what they were missing; an adrenaline-pumping live concert. Neon starts the process and confirms it Muscle Car made it onto the set list, mainly as the crowd begged for it. Prior to this, they featured newer numbers including, Government of Synth, Chillah Kaat and Chandni, along with the cover Lots of love and Mera mahi, all of which set the stage for larger and more mainstream action; Karakoram and Kashmir.

“It’s always a challenge being the opening band and after a year of not performing at all, there’s this uncertainty,” Neon bassist Zeeshan Athar told The Express Tribune. “But it turned out to be a brilliant experience.” Their drummer, Athar Saeed also said, “I am performing after 14 months. I have to entertain myself by playing on Shaadi before, but that doesn’t count. Incredibly enough, although we made a few mistakes at first, but they all worked out well. “

Instead, Karakoram performed their latest album Ailan and Jang, and literally, waging war on the stage. Sherry’s powerful growls, Zain Peerzada’s intense riffs, and Omair Farooq’s skillful bass playing coupled with Bilawal Lahooti’s praiseworthy timing on drums are too perfect not to impress.

“To be honest, we all really want to get back on stage,” said Khattak. “Being a rock band, concerts are our way out to absorb energy and adrenaline helps us to write more music,” he added. “All of this happening in our hometown, where it all started, is an added bonus for us.” Khattak later emphasized that the whole band was very excited, they could play the whole night, especially since the audience knew almost all of their songs, even though they were weeks old. 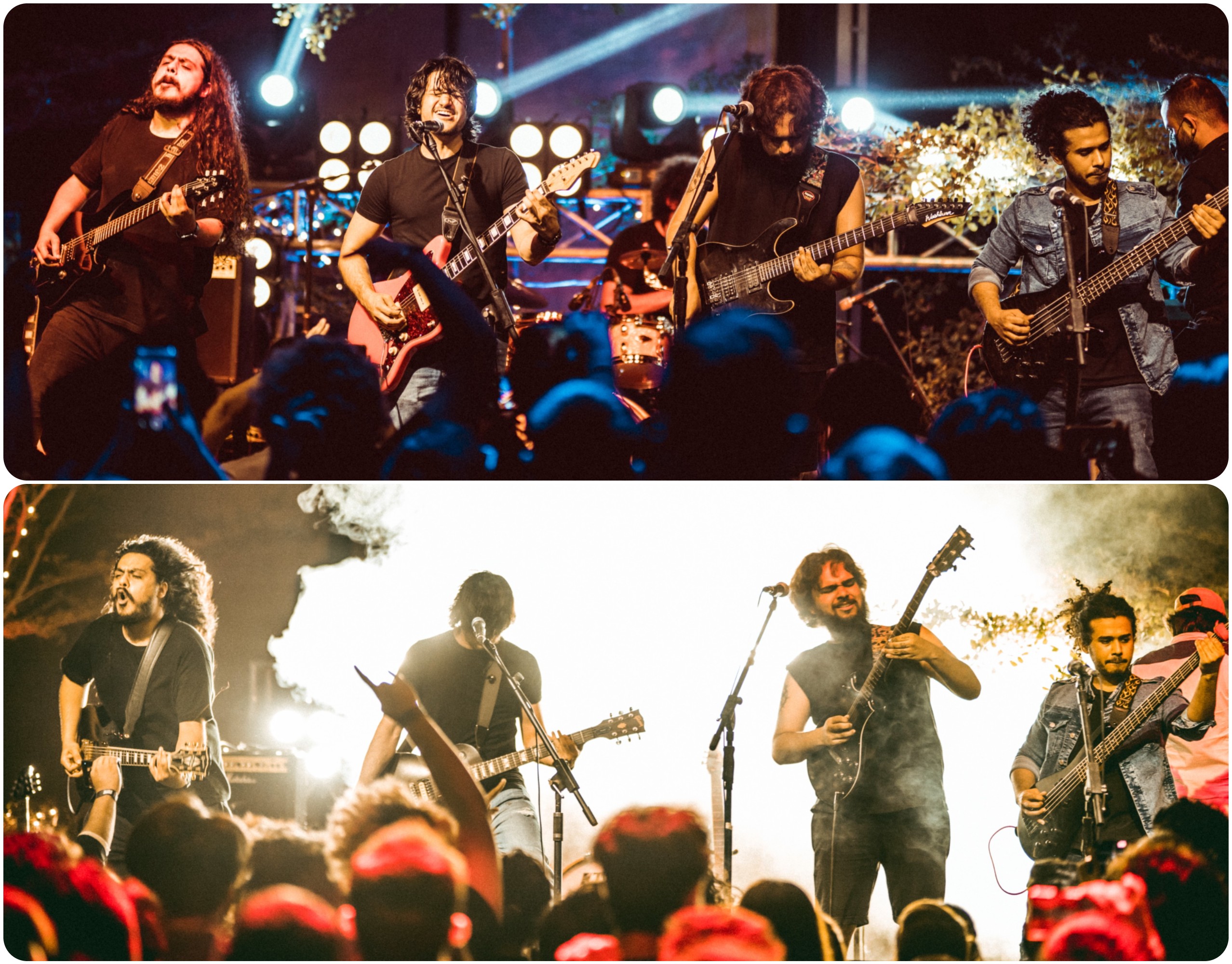 Peerzada, who also played with Takatak, praised the venue, the audience and especially the arrangement, which belongs to the Demo Room. “Playing the show after one year feels really good. The crowd made the effort and the trip from Lahore to Karachi was well worth it. I can’t wait for our next show here. “

Karakoram only played two live shows before last year’s Covid-19 outbreak. One of them was at the Lahore Music Meet and the other at the Koblumpi Music Festival Islamabad. “So, I don’t know if the lack of live performance made us rust, but we practiced as much as possible and allowed ourselves to lose on stage!” said Farooq.

And then came Kashmir with their never ending utopian dystopia. The only band whose sad music reminds them of one of the little things in life they need to be grateful for. And after the thunderous roar had passed, the crowd needed a breath of fresh air.

Kashmir started out with instrumentals and quickly moved on to Bhaago, after that they put on their famous show, Pareshaniyan, Parwana Hoon and Dhoop. Their heartwarming set-list also features Amir Zaki’s set-list Mera pyaar, and the audience joins in singing the evergreen lyrics. Kaaghaz Ka Jahaaz had to be played twice due to high demand and covers of The Weeknd’s Blinding Lights provoked the audience to shake hands. But of course, Khwaab, stole the show night and day, set an immediate record for all the critics who believed Kashmiri was just studio fluent. 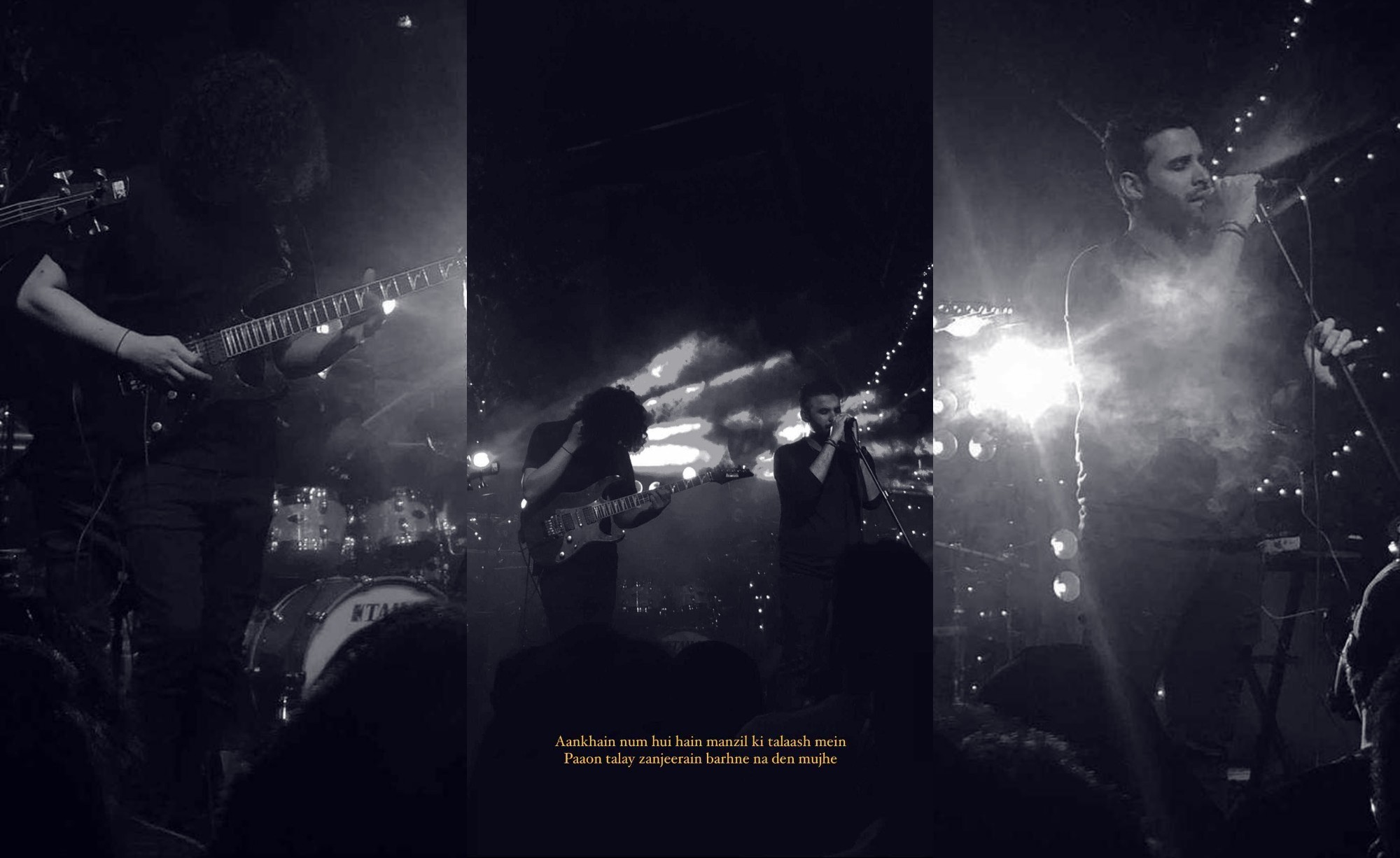 “Judging from the crowd and friends who attended, we thought it was like before. We enjoy being on stage, the audience engages with us and we are completely immersed in the moment, ”Kashmir said, as a whole.

It is important to mention here that prior to this, Shamoon Ismail’s concert was canceled halfway by the authorities due to SOP violations.

Pakistan last year presented a resolution to designate March 15 as the ‘International Day to Combat Islamophobia’ during the 47th Session of the OIC’s Council of Foreign Ministers (CFM) being held November 27-28, 2020 in Niamey, Niger.

The CFM unanimously adopted the resolution, with the OIC now working with the international community to commemorate this day at a global level.

PM Imran Khan has become a leading international voice in raising awareness about the serious consequences of increasing systematic Islamophobia in the West and in promoting interfaith harmony.

The Foreign Ministry in a statement said the OIC’s unanimous support for today’s appointment was a reflection of the sentiment of billions of Muslims around the world.

FO said Pakistan has always supported and continues to lead global efforts to build bridges between culture and civilization. “Through today’s commemoration, we want to build a better understanding of Islam and Islamic teachings,” he said.

“We intend to send a message of solidarity and international cooperation. We remain determined to promote the values ​​of peaceful coexistence and interfaith and cultural harmony,” said FO.

The OIC will hold a meeting on March 17

The OIC will hold a high-level event in New York on March 17 to mark this opportunity.

“The catastrophe of Islamophobia, fueled by populism, hate speech, and a lack of knowledge and disinformation, is causing unimaginable suffering for Muslim minorities around the world,” the FO said in a statement.

It is said that Islamophobia has taken many forms, including negative profiles, mass killings of cows, discriminatory laws, attacks on women for wearing the headscarf, ban on minarets, far-right party manifestos, negative propaganda and disinformation campaigns, deliberate vandalism against symbols. -symbol of Islam. and holy sites, and efforts to link and equate Islam with terrorism.

“Such actions jeopardize our common aspirations for a peaceful world and a harmonious future for all,” the statement added.


After falling more than 2,000 points on political alarms and fears of a new virus in the coming week, the market is seen finding its feet above hopes the government will return to the top of its game on the line, dealers said.

Other fundamental factors, such as investor concerns over rising government bond yields and the government’s decision to withdraw tax exemptions, also added to the stock beating, said Ahmad.

Volatility took place on the exchange in a week, after slumping more than 6.7 percent in the first four sessions, the index recovered more than 1,008.32 points on Friday.

Ali Zaidi at JS Global Capital said the losses were clearly under control as they robbed the index of 2,049 points during the week.

The main sales came from mutual funds and insurance companies; but the election of the Senate chairman is keeping the political heat high and investors anxious, Zaidi added.

Investor participation increased as the volume traded averaged 433 million shares / day, while the daily value of the traded securities increased to $ 138 million / day.

Another thing that needs to be considered is the spike in the number of Corona virus infections which has made the government reconsider its policy of further relaxing standard operating procedures (SOPs).

In an effort to restore the IMF program, the government took major week-long steps such as approving the SBP Act and clearing the NEPRA bill, while the Prime Minister also gave his approval to remove a number of corporate income tax exemptions.

At the demands of the IMF, the government has started the process of withdrawing tax exemptions of up to 140 billion and revising the increase in electricity rates, which damaged investor morale.

Arif Habib Limited in a report noted that although PM Imran Khan managed to win a vote of confidence in the National Assembly, stocks took a hard hit throughout the week against general expectations.

Concerns remain over the uncertainty of selecting the chairman of the senate. The opposition’s plan for a “Long March” towards the end of March contributed further to the prevailing political noise, the brokerage said.

For investors, it remains a source of further instability in the political sphere. Apart from politics, pressure has also come from concerns about rising inflation, creeping oil prices, lifting corporate tax exemptions, and the resurgence of the Covid-19 case.

Analysts view Sanjrani’s success as a major political relief for the incumbent government.

“We hope this will stimulate new confidence and stability in the political climate, which will help restore sentiment on local exchanges. We really highlight that the increase in Covid cases and oil prices can control the market, “said the report by Arif Habib Limited.