The Pakistani prime minister said he was under “pressure” to recognize Israel. However, Islamabad will never recognize a “Zionist” state until a fair settlement is reached on the Palestinian problem for decades.

In an interview with a local broadcaster that aired on Thursday evening, Imran Khan refused to name the countries that had pressured him to recognize Israel.

“Are they non-Muslim or Muslim countries that have pressured you?” the announcer asked in an effort to get clear answers.

“Leave this (question). There are things we cannot say. We have good relations with them (the country),” Khan said.

The United Arab Emirates (UAE) and Bahrain have recently established diplomatic and economic ties with Tel Aviv. Several other Gulf states are also considering options for normalizing relations with Israel.

“Let’s stand on our own feet in economic terms, then you can ask this question,” Khan said, referring to Islamabad’s longstanding economic dependence on the oil-rich Gulf states, mostly Saudi Arabia and the UAE.

He did, however, make it clear that he did not “think twice” about recognizing Israel.

“I do not think twice about recognizing Israel unless there is a just solution that satisfies the Palestinian people,” he continued.

Referring to the country’s founding father, Mohammad Ali Jinnah, who repeatedly refused to recognize Israel, the prime minister said Islamabad would continue to follow in the footsteps of Jinnah vis-a-vis Palestine.

Israel, he observes, has deep influence in the United States, which is another country that presses it to recognize Israel.

“The pressure is because of the deep Israeli (influence) impact on the US. This (influence) was actually tremendous during Trump’s term,” he stressed.

Answering a series of questions about Islamabad’s future relationship with the administration of US President-elect Joe Biden with particular reference to Afghanistan, Khan said there would be no “changes” in Washington’s ongoing Afghanistan policy, which aims to end 19 years. bloody conflict through political settlement in a war-torn country.

“Afghanistan is not the real problem. The real problem is Israel. It has to be seen how he (Biden) handles that. Whether he changes Trump’s policy (on Israel) or continues it.”


ISLAMABAD – Pakistan, one of China’s closest allies, has struggled to find volunteers for its part of the multinational Phase 3 clinical trial of China’s vaccine against the new coronavirus.

“Hospitals … have faced difficulties in recruiting volunteers for the trial because of a lot of misinformation, especially on social media,” a senior official at the National Institutes of Health (NIH), a government-run research body, told Nikkei Asia in a statement. anonymous terms.

In September, Pakistan approved the final phase of clinical trials for the single-dose vaccine candidate Ad5-nCoV, developed by CanSino Biologics, a Chinese vaccine company based in Tianjin, and the Academy of Military Medical Sciences, a Chinese military-backed research body. . In return, China will supply a COVID-19 vaccine to Pakistan as a priority.

For the Ad5-nCoV Phase 3 trial, scheduled for completion in January 2022, nearly 40,000 volunteers are expected to participate from Argentina, Chile, Mexico, Saudi Arabia, Russia and Pakistan.

Islamabad, which is economically close to Beijing and has $ 50 billion in infrastructure projects under China’s Belt and Road Initiative, has selected five hospitals in Karachi, Islamabad and Lahore for clinical trials, in which 8,000 to 10,000 people are expected to take part. Pakistan has also received massive Chinese medical and financial assistance since the coronavirus outbreak.

The NIH official said that the difficulty of gathering experimental volunteers was not a unique phenomenon in Pakistan. “Globally, a lot of people don’t trust certain vaccines, or new ones, which they might think were not tested adequately,” the official said.

According to the World Health Organization, 47 vaccine candidates are being clinically evaluated as of November 5, of which 11 – including Ad5-nCoV – are in Phase 3 trials.

Pakistan’s Phase 3 trial is a first for any vaccine. Asking ordinary people to volunteer even for a small phase of vaccine trials was previously rare in a country of 220 million people, leaving health authorities facing the challenge of vaccine doubt.

The government has not officially released the number of volunteers who have registered so far. However, the Indus Hospital (TIH) in Karachi was one of five hospitals selected for the trial – saying about 500 had volunteered there since October 13, although the target was 2,000. 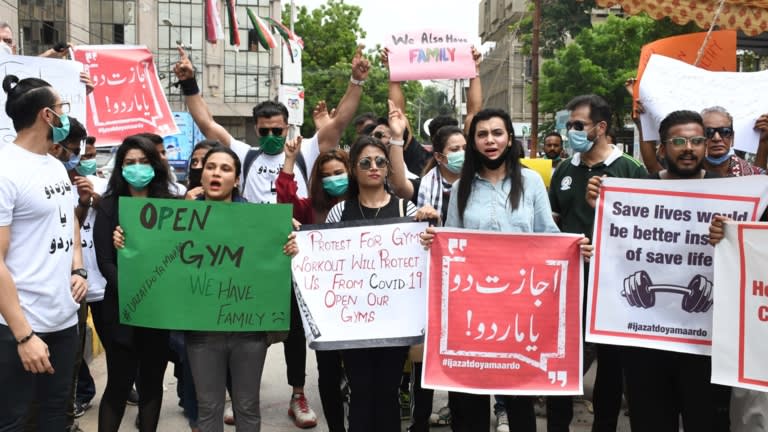 Health & Fitness Association members demanded the government allow them to resume activities in Karachi on July 20 during the lockdown against the spread of the new coronavirus. © Getty Images

TIH official Fawad bin Rashid told the Nikkei that people have misconceptions about vaccine trials, but “the number of people willing to volunteer for the tests has gradually increased, and hopefully that target can be achieved.”

The campaign against foreign vaccines is nothing new in Pakistan.

The country has grappled with disinformation surrounding long-standing vaccines, particularly for polio. Many parents reject the polio vaccine for their children, believing it is poisonous or part of a US plot to sterilize children in Islamic countries, making Pakistan the world’s last polio virus refuge in the world, along with neighboring Afghanistan.

Propaganda and conspiracy theories about the corona virus have become widespread. A survey conducted in October by Gallup Pakistan showed that 55% of Pakistanis are unsure if the virus is real and 46% consider it part of a conspiracy.

Videos of Kaukab cleric Noorani Okarvi accusing doctors of killing coronavirus patients are widespread on social media. He also emphasized that the COVID-19 vaccine would include a microchip that would allow Jews to control people’s minds.

Other theories include: the government gets more foreign funding if more people test positive; Pakistanis have natural immunity, keeping mortality relatively low; and this disease is more dangerous for Westerners than for South Asians.

However, some people opposed the disinformation and took part in the trials in hopes of ending the pandemic that has so far killed more than 1.2 million worldwide. Rashid, a TIH officer, gave an example of a taxi driver who registered and said that Islam teaches us to serve humanity.

Unlike the US and Europe, where companies or clinical trial sponsors run awareness campaigns and advertisements to enroll volunteers, clinical trials for the coronavirus vaccine are a less well-known affair in Pakistan.

The government and doctors have started efforts to address the disinformation of COVID-19 by involving the media and scholars. On Tuesday, the government published a front-page advertisement in the newspaper urging people to volunteer for trials.

Daily new coronavirus cases in Pakistan peaked at more than 6,000 in June before falling sharply. However, a new wave has begun, with 1,376 new cases and 30 deaths confirmed as of Friday, bringing the cumulative number of cases to 340,251 and deaths to 6,932.


Pakistani Prime Minister Imran Hasan Khan Niazi and Minister of Occupation of Pakistan-Kashmir (PoK) Ali Amin Gundapuri surrounded by residents of Gilgit-Baltistan during their visit to the region chanting slogans such as “We will never accept Pakistani involvement in our region. ”On November 1, Khan announced the granting of temporary provincial status to Gilgit-Baltistan despite ongoing protests against the Pakistani government over its decision to change Gilgit-Baltistan status.

The residents of Gilgit-Baltistan oppose Islamabad’s decision to integrate illegally occupied territory with the rest of Pakistan. Ahead of the assembly elections in this so-called autonomous region, the Prime Minister of Pakistan Imran Khan recently announced that the region will become a provisional province of Pakistan – a declaration that has drawn heavy criticism.

Activists wonder how an occupied state that does not have a standi locus of the territory can pick up the call to include it across Pakistan. Formerly known as the Northern Territory, Gilgit-Baltistan has been governed by the “Gilgit-Baltistan Empowerment and Self-Governance 2009”, which forms the electoral framework. Elections have been held in regions under orders that provide limited autonomy.

The people accuse Pakistan of systematically exploiting the region’s resources and not sharing dividends with them. Any resistance they say was met with brutal reprisals by the government with activists and leaders being hunted down, arrested and tortured. (ANI)


The cuisine of the Indian subcontinent is characterized by spices and flavors that differ only in the region. In particular, Pakistani cuisine is a fusion of various regional cooking traditions in Central Asia and the subcontinent.

For Pakistani blogger and photographer living in Doha and now author Shehar Bano Rizvi, (pictured) Pakistani food is about family – which she beautifully brings to life in her new book.

Virsa – A Culinary Journey From Agra to Karachi ‘is a cookbook with authentic and hands-on Pakistani family recipes passed down from generation to generation. It is specially designed for beginners but also features more complicated recipes for experienced chefs.

Virsa which means ‘Inheritance’ in Urdu, caters for everyone regardless of their level of culinary skills. This cookbook was originally conceptualized as a tribute to the author’s mother. However, that turned into a tribute to both his parents, extending the family legacy. It includes guides in both English and Urdu, with categories such as a desi cooking style guide, a homemade seasoning mix guide, and a visual guide for lentils for beginners stepping into the kitchen for the first time.

“I think what makes Virsa stand out is that it’s not just a collection of recipes, but also a collection of memories and stories of someone who grew up in the Indian subcontinent. Many people can tell the story of their mother and grandmother who cooked this dish and the family conversations around the dining table, ”said Rizvi.

Born in Karachi, Rizvi is a certified Project Management Professional (PMP) and a Software Engineer by profession. A Pakistani expat living in Qatar since 2004, she gave up her career as an active mother. Rizvi started his culinary journey with minimal cooking experience but has now developed a successful blog with a recipe section that has gained immense popularity for its detailed and easy to follow recipes.

“The Pakistani food featured in this book comes from Agra India, where my family used to live before India was divided. This recipe is made with simple ingredients and a blend of spices that make it very flavorful. Pakistani / Indian foods have a lot in common because of their common roots, ”he added.

The book was officially launched recently and has been well received in Qatar and Canada. Prior to the official launch, the first set of copies sold out.

“The response to this book has been phenomenal, more than I could have imagined. Most of the copies were pre-ordered even before the actual launch! We sold out in Qatar, US and Canada within hours! We had to reprint even before launch; It’s something my publisher in Pakistan says hasn’t happened in their publishing house’s 10 years.

“I think this book has touched people’s feelings. A lot of love is pouring into this book, especially from Pakistanis / Indians overseas because they remind them of home and family, ”said Rizvi.

Read more
Souq Waqif attracts residents, even though the population is a pandemic

A mix of people from different cultures and backgrounds, traditional arts and crafts, cafes and restaurants lining the streets, bird market, eagle market (with the majestic eagle hospital) – the iconic Souq Waqif still has a sensation despite the virus new corona pandemic.

SRINAGAR (Web Desk) – In India’s illegally occupied Jammu and Kashmir, posters of Pakistani leaders have appeared in Srinagar, Ganderbal, Baramulla, Bandipora, Badgam and other areas of the region.

According to the details, the Jammu and Kashmir Liberation Alliance issued a poster with a portrait of Pakistan’s Founder, Quaid-e-Azam Muhammad Ali Jinnah, the President, Dr Arif Alvi, and the Prime Minister, Imran Khan, along with their statements regarding Kashmir.

The posters call on Kashmiri people to mark October 27 as Black Day to register their protest against India’s illegal occupation of Jammu and Kashmir. Indian troops invaded Jammu and Kashmir on 27 October 1947 and occupied it in total violation of the Plan for Partition of the subcontinent and against the aspirations of Kashmir.