CAIRO – April 1, 2021: Greg Lewis, New Zealand’s Ambassador to Cairo, said he was delighted and wanted to see the royal mummies parade on Saturday, moved from the Egyptian museum on Tahrir Square to the National Museum of Egyptian Civilization.

excited and excited to see the royal mummy gold journey by copying # mummies property # Egypt < / a> From the Egyptian Museum on Tahrir Square to the National museum of Egyptian civilization. You can watch this historic event online on April 3rd at @ExperienceEgypt @ TourismandAntiq 🇪🇬 https://t.co/tLvBkNhPkv p> & mdash; Greg Lewis 🇳🇿🇪🇬 (@NZinEgypt) March 31, 2021

“Excited and eager to see the golden journey transferring royal Egyptian mummies from the Egyptian Museum in Tahrir Square to the National Museum of Egyptian Civilization,” Greg Lewis said in a tweet on his official Twitter account.

The event will be broadcast online on April 3rd via the youtube channel “Experience Egypt”.

Within the framework of the Pharaoh’s Golden Parade, where royal mummies will be moved in a grand procession from the Egyptian Museum in Tahrir to the National Museum of Egyptian Civilization in Fustat, the Egyptian Museum in Tahrir will temporarily close its doors to visitors on April 3. , provided that the admission period is extended on April 2, until 19:00 instead of 17:00.

22 royal mummies dating from the 17th, 18th, 19th, 20th dynasties, including 18 king mummies and 4 queen mummies, will be moved on April 3 from the Egyptian Museum in Tahrir to their permanent location at the National Museum of Egyptian Civilization in Fustat in a one-off event. lifetime.

Among the royal mummies that were removed were those of King Ramses II, King Seqnen Ra Taa, King Tuthmosis III, King Seti I, Queen Hatshepsut, Queen Meritamun, wife of King Amenhotep I, and Queen Ahmose Nefertari.

“Congratulations to the armed forces and organizers who organized the grand parade on the occasion of Pakistan Day,” he said in a statement issued here by the Prime Minister’s Office. The event was held on March 23rd but due to bad weather, it was decided to hold a grand event on March 25th.

The prime minister noted that all parade participants and troops from friendly countries put on a high performance, while the culture of four provinces including Azad Kashmir and Gilgit-Baltistan was presented in a flower wreath.

The parade, he argued, was a testament to the outstanding performance and professionalism of our courageous Armed Forces: Navy and Air Force. “We are a nation, committed to achieving the goals of national development and public prosperity, moving beyond unity and solidarity,” stressed the prime minister.

One hundred and forty-three cadets completed two years of training on board.

One hundred and forty-three cadets completed two years of training on board.

Speaking as the main guest of the ceremony, Chairman of the Karachi Port Trust Nadir Mumtaz, said KPT would expand all possibilities for cooperation to PMA in the education and training sector.

Cadets are awarded medals and cash prizes for outstanding performance.


A member of the group “bate-ball” or ball bat – a man dressed in a lively, identical, “fantasy” handmade costume – appears briefly as part of the Carnival tradition despite a ban due to the new coronavirus pandemic, in Rio de Janeiro , Brazil, Saturday, February 13, 2021. Rio’s municipal government officially suspended Carnival and warned there would be zero tolerance for those trying to celebrate with open street parades or clandestine parties.


In the summer of 2020, after the first wave of the coronavirus pandemic has subsided, many German carnival associations are optimistic. They have made detailed plans to ensure the February 2021 carnival season will comply with hygiene and social distancing rules, while still doing so. allows people to come together and have fun.

But this plan has not been discussed for a long time. Today, when much of the celebration is usually taking place in large, crowded venues and tents, Germany remains tightly locked. Street carnivals, stage events and parades have been held canceled.

Kissing strangers is a Carnival custom – but not this year

However, this year there were also some surprises for carnival fans in Germany.

The popular TV program “Mainz bleibt Mainz” (“Mainz remains Mainz”) will take place and broadcast as usual on the Friday Carnival, which is February 12 this year. However, instead of being broadcast live, it will be pre-recorded without an audience. For the first time in its history, it didn’t feature live chanting either. According to the Mainzer Carnival Association (MCV), the event will be “unique in the history of televised carnival.”

Changes to the Köln Carnival celebrations

Cologne is arguably the German city most associated with carnival celebrations. City broadcasts about its traditional celebration on Thursday, “Women’s Day” Carnival (Shrovetide Women), which marked the start of the public festivities, is also unique this year.

Due to the pandemic’s restrictions, Cologne’s shows will not feature dance groups, and musicians will stand further apart than usual. Everyone on stage without masks will be tested for COVID-19 beforehand, while other elements will be pre-recorded, such as the women’s mock parliament known as Punishment advice. One of the biggest events in Cologne, a music show called Ceremonial meeting, or “pomp sessions”, would not feature strict audience and social distancing rules.

“Honey, I played down the parade!”

In 2021, for the second time in Germany’s post-war history, the Rose Monday parade, which typically features floats taunting politicians and making disrespectful references to global and national political events, is canceled across Germany. The city of Cologne, however, found a way to have a similar parade.

The Rose Monday Parade on February 15 will be a miniature version of the original, with dolls instead of people: The Hänneschen puppet theater has lovingly recreated a miniature version of the float this year, which will be built but for the pandemic. The mini parade will move through the small replica of Koln’s Old Town. Carnival fans can enjoy the famous floats on TV.

The city of Braunschweig will also have its own miniature carnival parade. Created by German artist Torsten Koch, the film can be seen online Monday in a 15-minute film. 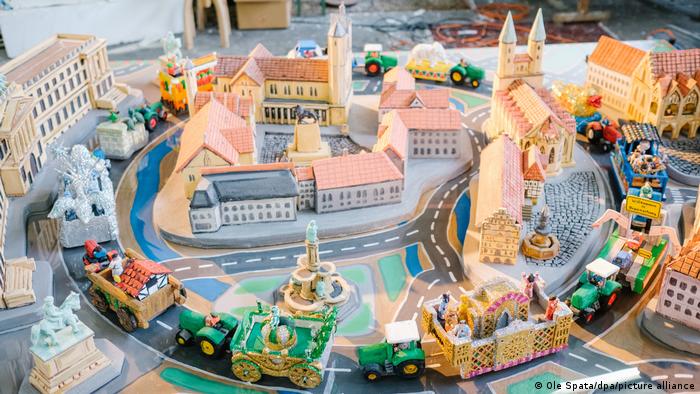 Both Weiberfastnacht and Rose Monday are unofficial holidays in Cologne. Most employers do not expect “business as usual”, especially if the office is located near the parade route. So it’s not uncommon to drink beer at work and turn on the answering machine.

This year things are different. The city of Köln declares carnival day to be a normal working day for its civil servants. To avoid crowds, alcohol may not be sold at certain potential hotspots in the city.

There are no gatherings in Düsseldorf, no parades in Mainz

In Düsseldorf, there will be no substitute for the canceled Rose Monday parade or the traditional indoor television show. The Düsseldorf Parade has only been canceled twice before in its long history: because of the Gulf War in 1991 and because of the storm in 2016.

In Mainz, two carnival shows will replace the Monday Rose parade. The organizers have set up a special media library where shows and other content can be accessed for a fee. Anyone who buys a ticket for the online stream also gets a gift delivered to their door: a special carnival scarf, known as Night gown, and sparkling wine or specialty beer, called a Fastnachtsbier.

Many other carnival associations in Germany have also designed digital programs that can be watched online or on YouTube.

“Please don’t go out at this time; we will bring the carnival to your home,” said the KITT Carnival Society in the city of Olfen, in North Rhine-Westphalia.

In Cologne, Bonn, and Monheim, popular carnival bands use drive-in cinemas to put on concerts – guaranteed social distancing because people have to stay in the car. The large screen allows the back row to see their favorite band on stage. People are encouraged to wear costumes and decorate their cars. 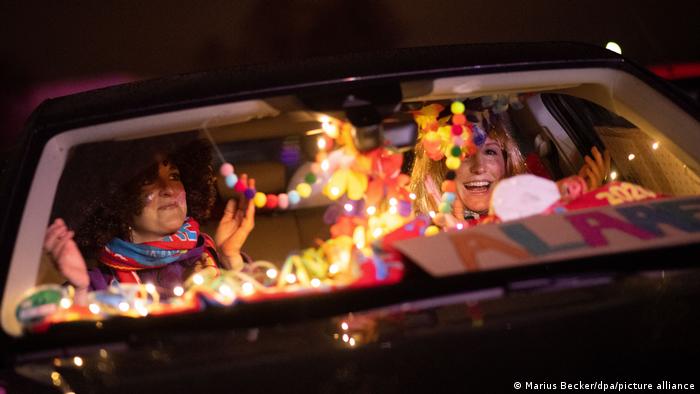 The fun of carnival is in very different circumstances

The cancellation of parades and carnival sessions was not only an emotional disaster for many revelers but also a financial disaster for the carnival association and the economic sector that profited from the annual event. The German Institute of Economics (IW) has calculated that the economic losses caused by the changes to the 2020-2021 carnival season will amount to € 1.5 billion ($ 1.8 billion).

The carnival club venue will lose an important source of income due to the canceled event. Retailers will miss the revenue generated from extravagant costume sales, hotels will feel the impact of a lack of tourists, and restaurants will sell less alcohol and food. The transportation industry will also suffer losses.

According to a study by the Boston Consulting Group (BCG), the city of Cologne alone lost nearly € 600 million ($ 725 million) due to regular carnival cancellations.

However frustrated the situation, the carnival organizers and participants had no choice but to accept it. Carnival is very important for people, especially in times of crisis, said Christoph Kuckelkorn, president of the Cologne Festival Committee. Even in difficult times, life went on, he said, and reminded people that that also happened in the first years after World War Two. Carnival is an important constant here – in any form.

This article was translated from German.