Germany has issued travel warnings for popular ski areas in Austria, Italy and Switzerland, struggling to contain the spread of the virus corona virus as the rate of new infections rose above 10,000 a day for the first time. While the infection rates in Germany are lower than in much of Europe, they are steadily increasing, with a daily increase of 11,287 cases bringing the total to 392,049. The German death toll stood at 9,905. “The situation has become very serious overall,” Lothar Wieler, head of the Robert Koch Institute (RKI) for infectious diseases, said.

“We still have a chance to slow the spread of the pandemic,” he said. But he said people should stick to the rules and that Germany must prepare for an uncontrolled spread of the virus. On Wednesday, German Health Minister Jens Spahn became the latest leading politician to test positive for the virus. His spokesman said he had cold symptoms but had no fever. Government sources said he was fit for work. Berlin issued new travel warnings for Switzerland, Ireland, Poland, much of Austria and parts of Italy including the popular South Tyrol ski area.

The UK, with the exception of the Channel Islands, Isle of Man and overseas territories, is also seen as a high risk region. Under the warning, which takes effect from Saturday, travelers returning to Germany must be quarantined for 10 days. Quarantine can be lifted early, if tests carried out after five days turn out to be negative. The surge in Germany also prompted the Danish government to warn its citizens against traveling to and from Germany, except for the border state of Schleswig Holstein.

Germany’s move could have a significant impact on ski seasons in the Alpine countries. Especially Austria, which reported a record 2,435 new daily infections on Thursday, is a popular destination for Germans. Swiss Tourism spokesman Markus Berger said the news from Germany was definitely not good. The industry hopes that the situation will improve in the next month or two. “We assume that winter can continue,” he said. However, there is positive news for Spain’s Canary Islands as the RKI removed them from its risk list, raising hopes for German tourists over Christmas and New Year.

(This story has been published from a wire agency feed with no modifications to the text. Only the title has been changed.)


New Yorkers are increasingly embracing the use of masks to slow its spread corona virus since the pandemic started earlier this year. With no end in sight, many have gone beyond standard surgical masks and are choosing to express themselves with more fashionable colors, patterns, flags and messages. Children arrive on the first day of school wearing masks with hearts, books, watermelons and musical notes written on them. A school assistant has a line of crayons on her mask, a friendly design for nervous kindergarten kids. On Madison Avenue, a woman wearing a matching designer mask and scarf walks quickly past an upscale clothing store. And behind it, there is another mask with a skull.

In Harlem, Hana Teferi walked out of a shop wearing a gold, black and silver Ethiopian mask which she wore in honor of her Ethiopian family. And actor Fredric Michaels wears a kente mask that reflects his African heritage. Camouflage masks are commonly used. An outdoor man dressed in camouflage from head to toe in a mask to match. A construction worker chooses camouflage, and two of her friends, Samantha Fernandez and Unique Corella, wear matching blue camouflage masks. Senior citizen Doris Shapiro wears an orange sequined mask and hat. The bright colors match her view: “I want to dance. I want to have fun, “he said.

Kai Waithe, in a fuchsia mask and purple hair extensions posing for a portrait: “I think being a creative person, through music and speech, and living in NYC has helped me with my fashion sense. I only wear what I feel, “he said. Retired Gil Gainey, who worked for many years in the human resources department at the hospital, wearing a paisley mask: “I’m very health conscious,” he said. We don’t know when this will go away, so we’d better be fashionable. “Teacher Amanda Clarke rushes to Brooklyn high school with a message on her mask, and on the minds of many people:” CHOOSE! “

(This story has been published from a wire agency feed with no modifications to the text. Only the title has been changed.)


Tens of thousands of people who have a positive result on COVID-19 received plasma as a way to try to help fight the virus.

Now, emergency supply, what plasma, which comes from the recovered syndrome in patients end.

The American Red Cross says the demand for this plasma more than twice in the last month as the cases increased. He distributes that the plasma faster than donations are coming in.

Franklin miles, who lives in Ohio is one of those donors. He learned how to donate my plasma from the news when he was in the hospital for COVID-19. He says he didn’t know if he would survive.

“It is helpful to be you know one of the catalysts of this kind has had it, came out of him and can help whether it is one or 50 people or 100 people, you can help other people too to think about it.”

Miles had to wait 28 days after he recovered from COVID-19 to donate.

He says the process is similar to donating blood and takes about an hour. Miles donated three times already. He learned that his donation went to someone in Arizona. He says he plans to continue to do it every 28 days until they tell him he has no more antibodies.

The red Cross says every donation has the potential to help three patients. Medical Director of the blood Bank at Johns Hopkins University says that while they see that plasma is very safe. Patients who have COVID-19 is able to tolerate without significant side effects.

“We have no possibility of making plasma in the laboratory. As significant as in our laboratory, there is no way for us to take the ingredients and production process, which leads to a unit of plasma to give to someone who is sick COVID-19.”

doctors are still studying how effectively plasma, helping patients to recover. A doctor from Johns Hopkins says that it looks as before that patients receive, the more chances that they will lead to a positive result.

If you have recovered from COVID-19 and want to donate plasma, you can find more information at this link.

Lahore: After a surge of confirmed cases of coronavirus and a significant increase in the number of patients recovering, the black market for blood plasma has appeared throughout the country, especially in the capital.

People sell blood plasma of patients who have recovered from coronavirus to tens of thousands of rupees, the Express Tribune learnt on Saturday.

Blood plasma or plasma is currently tested as a possible treatment of the disease syndrome in different countries, including Pakistan, as it contains antibodies developed by the immune system of people who won in the battle against the virus.

Although a large number of patients overcoming the disease is ready to donate plasma for free, some black sheep using the popular social media platforms to connect with seriously ill by the coronavirus of patients seeking care for a donation.

A patient who wanted to sell his blood plasma after its recent restoration, said, “I don’t want to make money, but to recover the costs incurred for treatment, as thousands of rupees have been spent on medication, counseling and food. I believe that there is no harm in reimbursement, while people sell their blood plasma for tens of thousands of rupees in the city.” 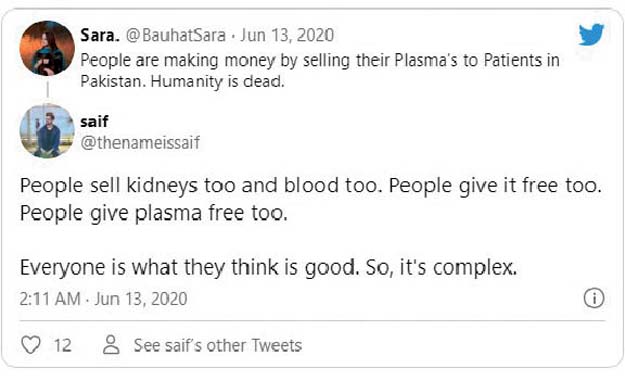 Other people involved in unethical trade also has its reasons. Thousands of posts available in social networks, pointing out that illegal activity takes place openly, without fear of law enforcement and accountability.

On 13 June, a Twitter user posted his thoughts on the matter: “people make money selling their plasma for patients in Pakistan.

Humanity is dead.”Meanwhile, many people believe that there is nothing wrong with it. They noted that people sell kidneys and blood.

In addition to blood plasma, people sent the demand for medicines, such as Remdesivir, Besimivir and other drugs considered to be useful in the treatment of the syndrome. To save the lives of their loved ones, some people have already expressed their willingness to pay any amount for these drugs is barely available. In may, the national Institute of blood diseases (nibd) confirmed that the first patient with a coronavirus, which were processed with plasma treatment recovered.

Selling oxygen tanks are also on the rise in online black market. 6-litre bottle with regulator and stand for Rs23,000, while the 8-litre version sold for Rs28,000 and 12-liter equipment for Rs35,000.

Speaking to the Express Tribune, trader of oxygen cylinder, Rashid Malik said that the prices have tripled due to very high demand. “Basically these cylinders are imported from China, Turkey and Russia. In normal days, we have been selling a 12-liter bottle is for Rs12, 000 to Rs15,000 and 6-liter for at RS6,000 to Rs7,000,” he disclosed.

The Ministry of national health services has already announced a campaign against illegal trade in blood plasma and black marketing of life-saving drugs used for patients with coronavirus in the country. Experts in the field of health warned citizens not to pay donors of blood plasma, since it is still experimental therapy.

In accordance with the transplantation of human organs and tissues act 2012, commercial business and trade bodies and human tissue is illegal in the country.


Jakarta. Plasma can help in restoring Covid-19 patients with a serious condition, but can be harmful if used carelessly, as a means to prevent viral infection, Director of the Eijkman Institute for molecular biology Soebandrio Amin.

“Recovered plasma donors is a therapy, not a method of prevention Covid-19. It also cannot replace the vaccine” Amin said Friday, commenting on misleading the public about the use of plasma to protect against disease.

Indonesia uses blood plasma — the liquid part of blood remaining after extraction of the blood cells therapy is the Covid-19 patients in the last few months with notable success.

The number of lifts increases, hitting new records on Saturday, with 884 patients discharged from hospitals throughout the country.

Said amine plasma to remove SARS-cov-2, a new coronavirus, which has caused Covid-19, helps to repair damaged tissue and improves the immune system of the recipient.

“Plasma comes from Covid-19 survivors. Their bodies had antibodies that had to overcome the infection. Thus, it can help to hasten the recovery of patients with serious condition,” said Amin on Friday.

However, medical personnel should ensure that plasma from Covid-19 survivor is safe and complies with the recipient, he said.

“Plasma must be confirmed negative from Covid-19 and shall meet the requirements of blood donors, such as free from HIV, hepatitis and malaria,” he added.

In addition, Covid-19 survivor must be in a condition suitable plasma should contain a sufficient level of antibodies, and the recipient must not have a mismatch of blood types, said Amin.

“The survivor must also sign a letter of consent, since it is voluntary. We’re not allowed to call and ask the survivor to do this is unethical. So we put an announcement and anyone who is interested and meets the requirements allowed to participate,” said Amin.

He added, surviving men is a priority for plasma donors. After all the female survivors are also allowed to be a donor while she is healthy and never been pregnant.

In addition, Amin claimed plasma can only be used as therapy, not as a method of prevention.

He also reminded the public not to take in connection with survivor blood and inject it in their bodies themselves, to avoid Covid-19 transmission because it is wrong, and the blood must first be checked.