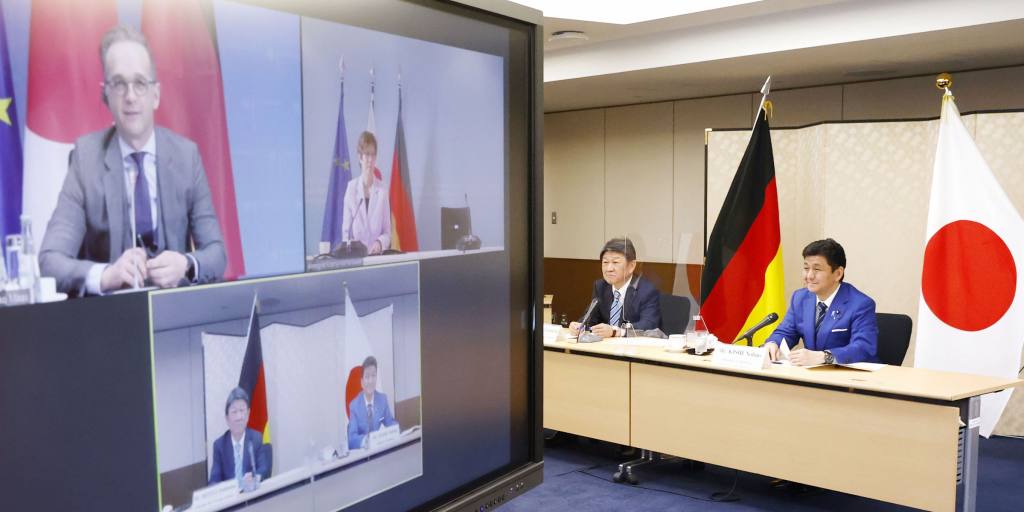 Japanese Foreign Minister Toshimitsu Motegi warned of increasing Chinese military activity in the Indo-Pacific. “Due to unilateral efforts to change the status quo by force, we can no longer rely on assumptions that support peace and stability in the international community,” he said.

European countries including Germany have distanced themselves from China as it strengthens its grip on Hong Kong and Xinjiang. Japan and the US are eager to call for their cooperation towards a “free and open Indo-Pacific” to counter Beijing’s expanding military and economic footprint in the region.

“In order for Germany and Europe to continue to help actively shape the world of the future, we must strengthen our involvement in Asia in particular, where important global decisions for the future will be made during this century,” said German Foreign Minister Heiko Maas.

“Cooperation with Japan plays an important role in this, as Japan is Germany’s key partner in efforts, based on shared values, to promote multilateralism, the rule of law and human rights,” he said.

The two sides discussed conducting joint naval exercises while Germany send a naval frigate to the Indo-Pacific as early as summer. The frigate is expected to create a port in Japan as part of the tour.

German Naval frigates in the Baltic Sea: German frigates are expected to establish ports in Japan as part of an upcoming Indo-Pacific tour. © Reuters

The move is particularly unusual for Germany, which has no territory in the Asia-Pacific. Although Germany has sent naval vessels to the region previously to promote goodwill, it has never been done for security-related reasons, according to the Japanese Ministry of Defense.

At Tuesday’s virtual meeting, the two sides shared serious concerns over China’s crackdown in Hong Kong, as well as human rights abuses against the Uighur minority in the Xinjiang region.

The two-plus-two dialogue is the latest signal from Germany of its growing interest in the Indo-Pacific. In the US, the Biden administration is desperate for greater European involvement to promote a rules-based order in the region amid concerns that Washington itself cannot check China’s military presence in the region.

Germany is the third European country to create a two-plus-two framework with Japan, after Britain and France.

Japan and Britain expressed similar concerns over the situation in Hong Kong at their last two-plus-two talks this February. Britain will send the aircraft carrier HMS Queen Elizabeth to the Indo-Pacific at the end of the year for joint exercises with the Japanese Maritime Self-Defense Force.

Japan and France have not held a two-plus-two meeting since 2019. There is a growing push to revive dialogue within the Japanese government, especially after France in February said it had sent a nuclear strike submarine into the South China Sea.

Britain has placed a greater focus on Chinese human rights issues under Conservative Party Prime Minister Boris Johnson, departing from the warm bilateral relations under his predecessor David Cameron. It is imperative that China detains pro-democracy activists in the former British colony Hong Kong despite previously agreeing to give the city a high degree of autonomy following its handover.

China’s economic influence in Asia is also a concern, especially as the UK turns to the market after leaving the European Union. China “presents the greatest country-based threat to the security of the British economy,” the British government. said in a defense review published in March.

Britain has applied to join the Comprehensive and Progressive Agreement for the Trans-Pacific Partnership, a trade pact known as the TPP-11, which increasingly serves as a balancing force in trade against China.

Germany and France have criticized China not only for Hong Kong, but also Uighurs and for belittling the coronavirus.

Germany is also concerned about China’s efforts to acquire companies with cutting-edge technology.

“Britain, Germany and France believe they need to work with Japan and other countries with similar values ​​to send a political message,” said Tokyo University professor Yuichi Morii, an expert on German politics.

But European countries don’t want to lose access to China’s 1.4 billion consumers. Volkswagen sells about 40% of its new vehicles in China. Their geographic distance from the country means Beijing does not pose as many direct security threats as it does to Japan, for example.

Merkel emphasized the importance of dialogue with Chinese President Xi Jinping in the April 7 phone call. Japan and the US may need to step up diplomatic efforts to defend Europe if tensions with Beijing start to weigh on its economy.

Additional reporting by Yusuke Nakajima in London and Togo Shiraishi in Paris.


KARACHI: The Pakistan Hockey Federation (PHF) has sent a communique to IPC Minister Dr Fahmida Mirza and the National Command and Operations Center (NCOC) to help him organize the final phase of Pakistani junior training in Karachi for the Junior Asian Cup to be played in Dhaka in early June.

PHF Secretary Asif Bajwa told ‘The News’ on Thursday that PHF is seeking permission and assistance from the competent authorities on this matter.

PHF has decided in principle to create a biosafety bubble for the training camp, which is planned to be held at the Abdul Sattar Edhi hockey stadium in Karachi.

PHF Secretary said, there is less than two months left before the Junior Asian Cup. This event doubles as the qualifying round for the 2022 Junior World Cup.

It is important to mention here that Pakistan missed the 2016 Junior World Cup due to the ruse of the Indian government.

Pakistani juniors have not played against a quality team for a long time and there is no chance of such a match before the Asian Cup due to the coronavirus. The only options for PHF to prepare them are dometic events and training camps.

Bajwa said that PHF had assured all authorities that the Covid-19 protocol would be strictly adhered to.

He said all the training and preparations carried out so far would have been in vain if the last stage of training was not held.

He hopes that PHF will receive a positive response from the IPC and NCOC ministries in a few days.

Sources say that the number of training camp participants will likely decrease or camps could be arranged for groups of players.

Camp command and team manager Danish Kaleem said he was waiting for direction from PHF.


KARACHI: Former Pakistani amateur boxer Syed Mohammad Asif recently turned professional after realizing that his amateur career was completely uncertain due to a lack of support.

Pakistani boxers have suffered more than players from other sports disciplines in recent years due to a lack of proper protection.

Asif, who hails from the Hazara community in Balochistan, was considered Pakistan’s top seed when he turned to professional boxing a few months ago.

After playing his first pro fight towards the end of last year under Amir Khan Promotions which he won against Afghan fighters, Asif defeated an Indonesian fighter while playing under the Hussain Shah Promotion in Karachi recently.

Asif’s next fight is against a Filipino fighter in Manila on May 22. The event is related to the Manny Pacquiao Promotion where Usman Wazir and Kamran Khan from Pakistan will also fight.

“Yes, I am looking forward to the fight in Manila. I train hard for it, ”said Asif ‘The News’ in an interview from Quetta.

Having won silver at the last two South Asian Games, in India and Nepal, in the flyweight category, Asif is neither promoter nor financially strong enough to meet the demands of his early professional career.

“My family situation is too bad financially. I have to buy my ticket for Manila. Balochistan Sports Minister Abdul Khaliq Hazara has promised support and hopefully I can arrange the match, “said Asif.

“Promoters, you know, aren’t easy to convince. “This is just the start of my professional career and my aim is to win a few more matches which will help me impress the promoters and I hope they will take me under their wing,” he said.

Asif is eager to play more amateur boxing for Pakistan but the situation is not suitable for his growth. “You know we are in big trouble there and there is no future in sight,” he said. “If your growth stops, it really bothers you. There are several events on the amateur circuit. “At one time I dreamed of getting an Olympic berth but when I saw that there was nothing to offer as far as training and other facilities were concerned, so I decided to think about my future as a professional boxer,” said Asif.

“A career in professional boxing is my dream. I have the capability to develop in this area but it all depends on the opportunities I get. I am sure I will achieve something big. “Even in Manila I will play without cards but I see something positive and hopefully will get a place in this boxing zone which is very interesting,” said Asif.

Following in the footsteps of former WBC No. 1 Mohammad Waseem, most Pakistani boxers have started turning to professional boxing after losing hope in the amateur field due to a lack of attention.


KARACHI: The third phase of Pakistan’s junior hockey team training camp, which is scheduled to start April 7 at the Abdul Sattar Hockey Stadium in Karachi, is now uncertain due to the third wave of Covid-19 in the country, ‘The News’ has studied.

The PHF and the Sindh government remain in touch, however, discussing how the camp could be organized.

Informed sources said the PHF has decided to hold a camp in Karachi where the number of coronavirus cases is much lower than in Punjab cities but the provincial government is also taking steps to prevent an increase in Covid cases once again. The Sindh government wants to prevent the spread of the corona by limiting the travel of people from other provinces.

Sources say, there is a possibility that PHF will reduce the number of players on the training ground. They initially called up 35 players for training camp.

Sources said that PHF secretary Asif Bajwa is abroad and he will contact the Sindh government to resolve the matter in a few days.

Pakistan will participate in the Asian Junior Cup in Bangladesh, which is scheduled for June 1-10.

PHF officials said the camp had not been postponed. It may be delayed for several days, however, they added.

It is important to mention here that the Junior Asian Cup is the qualifying round for the 2022 Junior World Cup, which is planned to be played in India.

Junior Pakistan has not played against any other country for a long time. If their training camp is affected by the corona it will hurt their chances of success in Dhaka.

The best solution is to reduce the number of players in training camp, said an official. He said only the best players might be invited to attend training camp in their current state.

After consultation with the Sindh government, the final decision will be announced in a few days, PHF officials said.

PHF Secretary Asif Bajwa, when contacted, said that the third phase of the Pakistani junior team training camp will be held at the Abdul Satttar Edhi Hockey stadium, taking all precautions to avoid the Covid-19 case.

She says that the third phase is the most important for boys.

He said that details and player names for the camp would be announced in a few days.

It has also been learned that the third phase of the training camp will have a maximum number of players so that different team combinations can be tested in less than two months before the Asian Cup, which starts from June 1 in Dhaka.

Sources at PHF said that due to the third wave of Covid-19 and the increasing number of cases in Punjab, Karachi was an ideal place for a training camp.

The PHF has yet to announce the schedule of matches between Pakistani seniors and juniors that it plans to give young players match practice. Olympian Danish Kaleem is the camp commander and junior head coach of Pakistan.