(MENAFN – UkrinForm) Over the past five years, Switzerland has allocated CHF 125 million for project implementation in the Donbas. 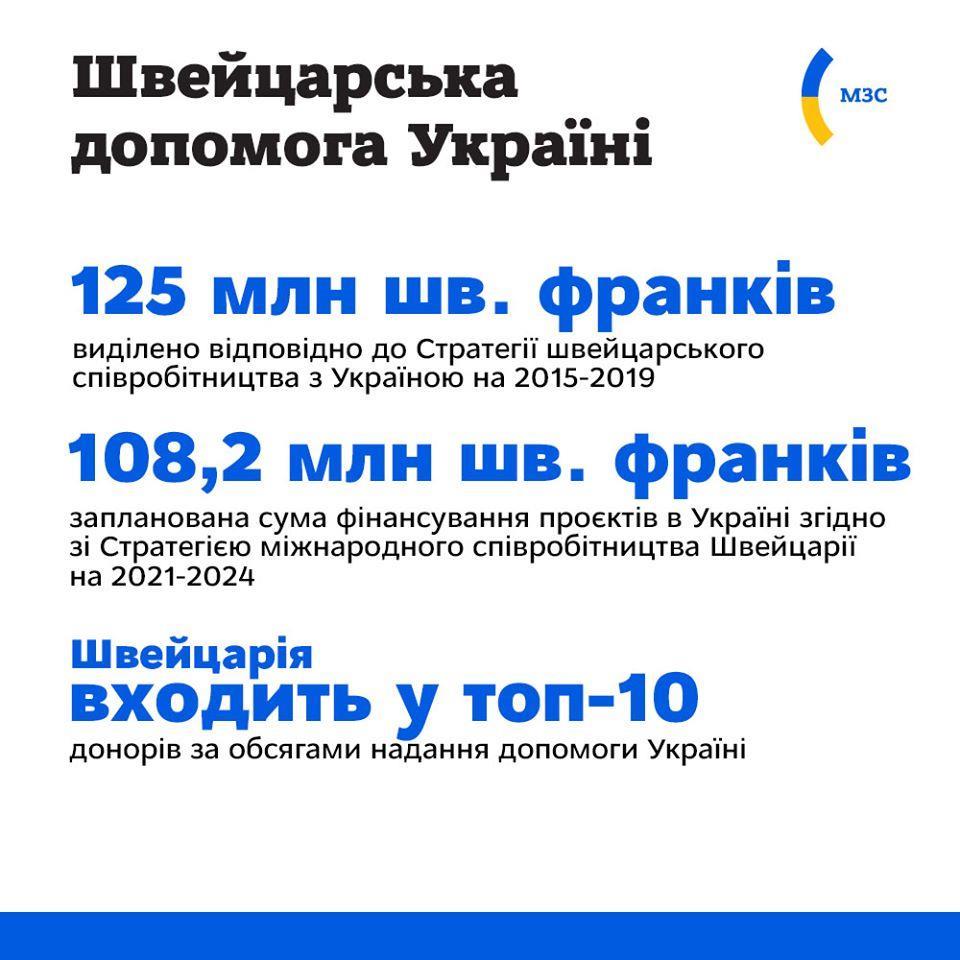 He said this when he was leading the provincial government team, who attended the NEPRA hearing on plans proposed via video link. NEPRA Chairman Tauseef H. Farooq chaired the meeting, said a leaflet. Other team members include CM Energy and Power Advisor Himayatullah Khan, Energy and Power Secretary Muhammad Zubair Khan, Chief Executive of the Pakhtunkhwa Energy Development Organization, Naeem Khan and Lawyer Asghar Khan. The chief minister said Khyber Pakhtunkhwa had the potential to produce more than 30,000 megawatts of electricity that could be used to overcome the country’s energy crisis. The provincial government team said NEPRA had ignored the provincial hydropower project. PEDO objected and reported the same thing to NEPRA as a competent forum for approval of the plan. As a result, NEPRA issued a directive to the National Transmission and Shipping Company to include the Khyber Pakhtunkhwa hydro project in the revised plan. The team added that at that time the PEDO provided details about new and upcoming hydropower projects but in the revised plan for April this year, the details provided by the provincial government were once again ignored. As a result, the PEDO, while rejecting the proposed plan, submitted a comprehensive comment for consideration in this matter. The provincial team, in its efforts to defend the rights of the province, voiced objections for ignoring the hydropower project in the proposed plan. That is called injustice for the province and explains that it cannot be accepted by the provincial government. The chief minister, who for the first time led his team at the hearing, demanded to include all provincial hydroelectric projects in the proposed plan.

The Chairman of NEPRA, after hearing the concerns of the government Khyber Pakhtunkhwa, convinced the KP chief minister about the serious considerations and steps needed to include KP projects in the revised plan.

Meanwhile, Chief Minister Khyber Pakhtunkhwa Mahmood Khan visited Hazara to inaugurate construction work on the streets in three tourist attractions in the division today. “The inauguration of construction work on three roads in the tourist resort envisions the vision of Prime Minister Imran Khan and the government of Khyber Pakhtunkhwa who are interested in promoting tourism to generate income and create job opportunities for young people in the province,” an official statement said on Thursday. Chief Minister Mahmood Khan will visit the Kaghan valley where he will formalize construction work on the road to three beautiful valleys, including Mahnoor, Paparang and Shogran. The KP government has set aside Rs2,400 million in the 2019-20 Annual Development Program for road construction in Hazara to promote tourism in the division. The construction of three roads in various locations in the Kaghan valley is part of the program that is carried out according to the ADP plan.

A 15 kilometer road in the Mahnoor valley will cost Rs686 million, a nine kilometer road in the Paparang valley is Rs382 million, while Rs353 million will be spent on building an 11 kilometer road to the Shogran Valley. Meanwhile, the KP government is also preparing plans for the construction of a 370 kilometer connecting road infrastructure in the provincial tourist resort, which will increase tourism, generate income and provide opportunities for young locals. Likewise, a feasibility study has also been initiated for the establishment of 10 integrated tourism zones in the Hazara and Malakand divisions.


The Karachi Metropolitan City Council (KMC) on Thursday approved a contract with the World Bank for the CLICK project in which the appointment work will be carried out in Karachi.

Karachi Deputy Mayor Arshad Hussain chaired the council session at the KMC building. A total of 14 resolutions were adopted in the session, of which 10 were adopted unanimously and four were adopted by the most votes.

The local council of the KMC, the District Municipal Corporation and the District Council will provide work details to the implementing unit established for the CLICK project. Participating in the debate, Aslam Shah Afridi, Karamullah Waqasi, Junaid Mukati, Amanullah Afridi, Hanif Soorti, Rahat Hussain Siddiqui, Muhammad Asif Siddiqui, Imam Syed Khalil, Habib Hassan, and others fully supported resolutions and contracts with the World Bank for development work in development. Karachi. They call the contract a good sign for Karachi, a city that has been ignored for years.

They stressed the need to set priorities for improving the city’s service infrastructure. Members expressed hope that the CLICK project would help in increasing work at the UC and Karachi level to once again become a prosperous city.

Meanwhile, the council also issued an additional vote with the most votes for the establishment of the COVID-19 Infection and Disease Research Center at Abbasi Shaheed Hospital, collecting fees from registered telecommunications and cable operators and forming a section for this purpose, and auctioning of the No 2B plot at Old Sabzi Bath.

The Council also passed a resolution to set up a pension table to help retirees. In another resolution, the board approved the regulation of 178 contract employees and the expenditure of salaries for 722 employees who worked on contracts from January 2019.

A unanimous resolution was also adopted asking the relevant authorities to write the Khatim-un-Nabiyyin under the name of the Holy Prophet Hazrat Muhammad (Peace Be upon Him) in all curriculum books.

In another unanimous resolution, the council called on the federal government to direct K-Electric to improve its course and stop overloading and overcharging. The council also approved the contract made by Karachi Mayor Wasim Akhtar or his candidate with the most votes.

However, when an opposition member from Lyari accused the corruption minister of the Muttahida Qaumi (MQM) local government, members of the treasury were protesting. Opposition members say that the MQM remains part of the Sindh government, and cannot blame the current provincial government for its failure.

Earlier, a condolence resolution was adopted for the death of Deputy Director of the National Park Muhammad Nadeem and people who were electrocuted during the recent rains.


MANSEHRA: Federal Secretary of the Federal Parliament MNA Saleh Muhammad Khan said that on the recommendation of Prime Minister Imran Khan, the Khyber Pakhtunkhwa government had approved a Rs1.25billion fund for the construction of three roads under a tourism promotion strategy in the province.

“For the first time in the country, the ruling federal government has given tourism industry status and launched a major development project to explore more and more tourist attractions in Khyber Pakhtunkhwa,” he said at the oath ceremony of the hospitality business association in Balakot on Sunday.

“I have received the prime minister’s directives for the establishment of medical colleges and women’s universities and these two big projects will also bring big changes in the lives of the local population,” he added.

He said the Khyber Pakhtunkhwa government wanted to divert 700 million road projects from here to other places in the province, but Prime Minister Imran Khan at his request to limit the transfer of funds and now working on the big project would begin immediately because the tender process was complete.

On that occasion, Chief Minister Adviser Ahmad Hussain Shah said at the meeting that Chief Minister Mahmood Khan would be here in the Kaghan valley next week where he would formalize three road projects.

“Working on 5 of a total of 14 small hydro power projects carried out in Balakot Tehsil has been completed with funds of Rs 500 million and the chief minister will also inaugurate the dam,” he said. He also gave an oath to the Balakot Hoteliers Association. Association president Ejaz Ahmad Khan highlighted the problem of the tourism industry due to lockouts due to the Covid-19 pandemic.

ISLAMABAD (Dunya News) – The Kohala and Azad Pattan hydroelectric projects launched by the federal government will generate 1,800 megawatts of electricity and create 8,000 jobs.

In a Facebook post on his official page, Prime Minister Imran Khan has mentioned that the Kohala project will be developed on the Jhelum river in Azad Kashmir.

Likewise, the Azad Pattan project will be built on a double boundary between Rawalpindi district in Punjab and Sidhnouti district in Azad Kashmir.

The Prime Minister said the federal government would expand full cooperation to the provincial government in improving good governance.

He appreciated the efforts of the Punjab government for initiatives taken for the welfare of the people and improvement in service delivery.

The Punjab Law Minister told the Prime Minister about the draft law for the local government system and said the new law would realize the dream of real change.