The Australian Government has been urging to join Malabar naval exercises for more than five years, but has been repeatedly blocked by India.

But now, some Indian newspapers report that the Modi Government has changed its mind and will allow Australia to participate.

The Australian government also believes India has changed its position, with a senior source saying there are “very positive signs” an invitation will be formally issued soon.

Since 2017, Australia, India, Japan and the US have increased cooperation through the “Quad” security dialogue, but expanding Malabar to include the four countries would give the group a sharper military edge.

It will also represent a substantial diplomatic and strategic victory for Australia.

If Morrison’s defense strategy sounds like talk of war, that is indeed true

If there is any benefit to any anxiety caused by Scott Morrison’s gloomy security outlook in our region, it will save time.

Japan and the US are very enthusiastic about Australia joining this exercise.

But New Delhi has long hidden doubts about Australia’s commitment to defense cooperation, especially after the Rudd government withdrew from the first Quad iteration back in 2008.

India is also cautious in antagonizing China, which criticizes Quad and accuses Washington of organizing a campaign to arrest him.

Australian officials insist that Quad is not intended to curb the rise of China, but rather to establish “patterns of cooperation” and “norms of behavior” in the region.

But a New Delhi-based defense analyst, Abhijnan Rej, said that Malabar that was inevitable with Australia included would be seen as an attempt to hold China back.

“India will never use the word C,” Mr Rej said.

“But basically, this will be seen when India joins hands towards some kind of instant containment strategy directed at China.”

“It will not be called a part of the Quad. But no one will be fooled, let alone Beijing.”

‘A minded navy, a minded democracy’

The decision came at a critical time for Australia.

Government – mired in a series of fierce conflicts with China, and increasingly worried about the US’s commitment to Asia – working to deepen Australia’s relations with India and Japan.

Hopes for Australia’s next big trade

India has the second largest population in the world but only Australia’s fifth largest trading partner. But the dramatic increase in the Indian diaspora in Australia will soon help change that.

The former Indian Navy spokesman, Retired Captain DK Sharma, told ABC that including Australia in Malabar would create a coalition of “like-minded navies, like-minded democracies” throughout the Indo-Pacific.

“We all follow rules based on rules,” he said.

He said China’s assertiveness of individual countries, such as India and Australia, had pushed countries closer.

“[China] “I never expected that such an alliance could be sewn together,” said Captain Sharma.

“But they have put it in our throat … That’s what makes them confused.”

Most observers hope that Australia will initially only be invited to join Malabar as an observer, before increasing its participation and sending naval vessels in the coming years.

The corona virus pandemic might also push back the next Malabar exercise until 2021, delaying Australian participation.

India has the third highest military expenditure in the world and is a dominant force in parts of the Indian Ocean, but its ability to influence events in the Pacific is limited, according to analyst Mr Rej.

A series of growing border disputes in the Himalayas has also hardened views of China in New Delhi.

Last month, a a fight broke out between troops at the border post in the Galwan Valleykilling 20 Indian soldiers. Beijing did not reveal how many casualties it had borne.

Why is India’s move to change the status quo in Jammu and Kashmir “unacceptable” to China?

Jeff Smith of the Heritage Foundation said India always “prefers to remain out of tune” but “the constant threat from China almost forces its hand”.

“India has forged a type of strategic bond with the US to the point where they have several interoperability agreements, a shared vision for the Indo-Pacific, increased numbers of arms sales, very high volumes and the sophistication of military training,” he said. .

Ian Hall of the Griffith Asia Institute said India’s anxiety about China’s behavior “has increased in the last decade”.

“This has led to discussions about closer cooperation with regional partners, including Australia, to safeguard freedom of navigation, protect sea lanes, and if necessary, in crisis, limit the ability of PLA navies to operate freely in the region.”

An Australian Department of Defense spokesman said Australia had not yet received an invitation to Malabar, but stressed the benefits of the exercise.

“Australia sees the value in participating in quadrilateral defense activities to increase interoperability and advance our collective interests in the free, open and prosperous Indo-Pacific region,” they said.

What is the value of Ryan, Scott and Adam Thomas? And how do they make money? Find everything …

Showbiz’s brothers Ryan, Scott and Adam Thomas returned to our TV screens with a new mini series on ITV: ‘Mancs in Mumbai’.

This will see families begin their quest to learn about their Indian heritage, along with their father Dougie James.

But with TV credit like Coronation Path, Emmerdale, Love Island, Celebrity Brother and I’m a celebrity under their belt, what is Thomas’s value?

What is Ryan Thomas’s net worth?

Ryan Thomas is reportedly worth around £ 1 million.

Last year it was reported that Ryan was set to become a millionaire again after he was declared bankrupt in 2013.

The former Coronation Street star went bankrupt when he was hit with a £ 40,000 tax bill he could not pay seven years ago.

But after paying back every penny of what he owes, the star reportedly lost £ 500,000 to appear on Celebrity Big Brother in 2018, and has been in high demand for TV appearances and magazine offers since winning.

Ryan previously admitted that he was not the best in caring for his money after apparently making around £ 100,000 a year during his time as Jason Grimshaw at Corrie between 2000 and 2016.

But when he fathered 11-year-old Scarlett – whom he shared with former Tina O’Brien – the star learned to care for her finances.

He once said: “This is not something I’m proud of but when I was 16, I had a lot of money and I spent it all for my friends.

“I am very generous and I think it grows on trees and times have changed and that is a big responsibility. I want to provide for Scarlett and I have learned to save money for the tax man and I hope my dreams come true.”

Read More: How Many SAS Celebrities: Who Dares Win celebrities get paid for shows?

What is Scott Thomas’s net worth?

It is unknown how much money Scott Scott has, but since finishing third on Love Island in 2016, he has founded his own Public Relations company.

As Director for The Social, he thinks reality stars get a decent salary, because their current clients include PrettyLittleThing, the Edwardian Hotels hotel group and a series of restaurants and bars.

And with 875k followers on Instagram, he also made many public appearances and models for various brands and photographers.

Read more: Mark Labbett, weight loss: how the star of The Chase achieved its dramatic transformation

What is Adam Thomas’s net worth?

There is not much information about Adam Thomas net worth available. But he played Adam Barton at Emmerdale for almost ten years between 2009 and 2018.

He also won the hearts of the nation when he came in third place at I Celebrity in 2016, before continuing the presentation role in the spin off I A A Celebrity: Extra Camp last year.

Adam had previously joked Emmerdale paid him the same salary as Tesco in a naughty jibe.

It was also reported in 2016 that Adam left ITV soap after the boss tried to prevent him from taking the role of the £ 100,000 panto at Jack and the Newcastle Beanstalk.

A source told The Sun at the time, he decided to go with the panto role, adding: “This is a good payday for him and he is a popular character in ‘Emmerdale’, so the bosses must let him make decisions with hope. maybe back in the future.

Read More: Who is Mark Labbett Katie’s wife and what happened to the cheating claim?


Although Travis Scott will not drop his new song Fortnite Until Thursday, April 23, collaboration has begun with a number of tasks that players can complete to obtain some loot from the Astronomy program.

(Photo: Fortnite / Facebook)
The Astronomy event at Fortnite will begin this Thursday, April 23.

Fortnite x Travis Scott Guide: Where to dance at Apres Ski or The Yacht? Plus the location of Astro Head

Among the challenges for Travis Scott and Fortnite The collab will dance for 10 seconds at The Yacht or Apres Ski, which is an unmarked location.

For most players, choosing The Yacht will be a better choice because it is marked on the map, and everyone can get there easily without any guidance.

The problem is because everyone will most likely go to the location, there is more chance of getting killed on the road or at the location itself. So Ski Apres will be a more reasonable choice. Based on Forbes, it’s also an easier choice because players can avoid Henchmen.

Like anything Fortnite players will know, The Yacht is one of the northeastern parts of the island, on H2, while Apres Ski is located in the mountains in the southern part of the map, which is located on E8.

Here is the location on the map: 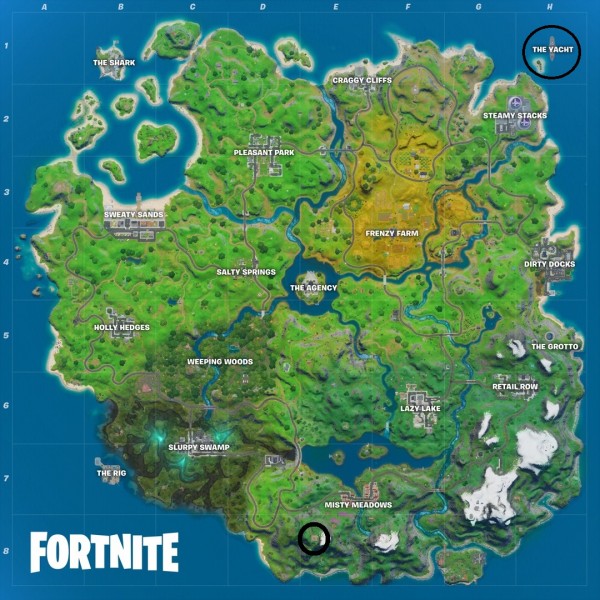 Regardless of your choice, just dance / emote on location for 10 seconds in a row without dying, and the search must be complete.

The prize for the mission of the Astronomy event is a trippy, weird, and rather sinister display featuring the famous rapper and man today: Travis Scott.

Also Read: Final Fantasy 7 Remake: How to Unlock Every Resolution Scene in Chapter 14

Find the head of the giant Astro

Besides dancing in the locations mentioned above, there is another one Fortnite x Travis Scott’s collaboration mission is for players to complete where they have to bounce off the giant Astro head – or basically a group of Travis Scott heads scattered in several locations on the island.

There is five heads in total and quite easy to find even if you are in an unmarked location. For anyone who visits the stage at Sweaty Sands or may have just landed in the area, Astro’s head is around this marked location. 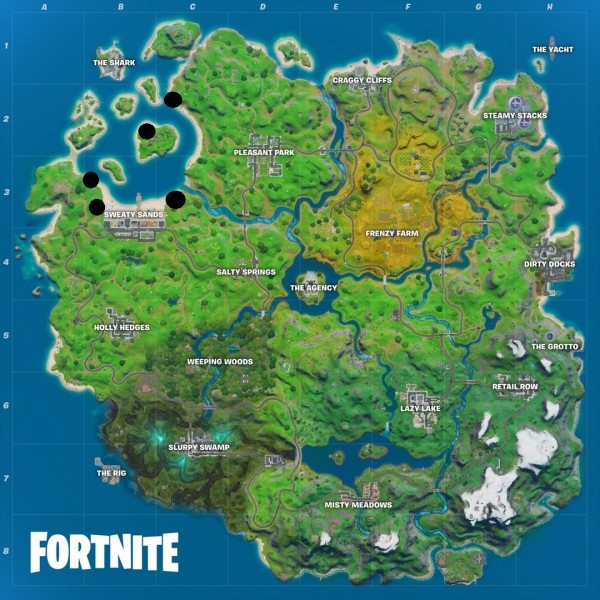 However, it is a difficult mission to do in one match, because bouncing off the head means landing overhead from the sky in one way or another – so players have to land from the start, or they have to find another way like Choppa or make several ramps .

It should be noted too Fortnite players will get fall damage protection from bouncing giant rubber heads. Whoever completes the challenge will get an Astronomy prize too.

The rapper will debuting his new song in Fortnite this week, and the door will open – almost – 30 minutes before the event. Players who attend the event will get a number of booty for their time.

Fortnite v12.41 has also been launched in preparation for Astronomy challenges and events, according to PCGamer. Apart from this, there are also several bug fixes that were launched with the update.