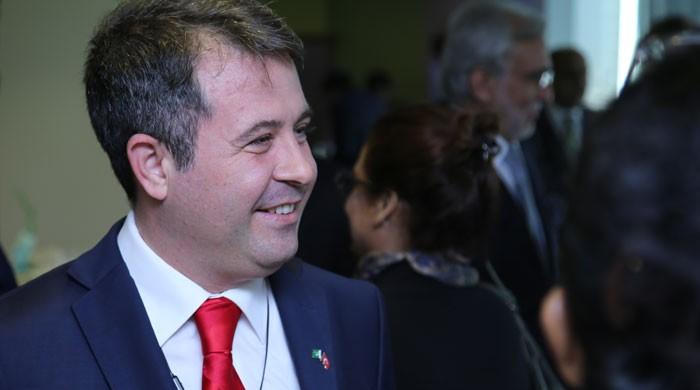 KARACHI: Turkey on Tuesday invited Pakistan’s private sector to explore joint venture opportunities in trade and investment with its partners, while expressing interest in helping develop the tourism sector and cooperating in the information and technology sector.

“The business community can collaborate with each other in various sectors of the economy, especially the information technology sector because Pakistan’s software house is working very well, while the potential for increased cooperation also exists in the tourism, education and automotive sectors,” Ucak said during a meeting with delegates of the Chamber of Commerce and Industry Karachi (KCCI).

economy whereas Turkey can also assist in setting up a tram service system in Karachi, particularly on the coastline with sea views.

The envoy expressed his desire to strengthen trade and investment relations between the business communities of the two countries. The commercial section of the Turkish consulate in Karachi is ready to fully assist the Karachi business and industrial community who intend to enhance trade and investment relations with their Turkish counterparts. To deal with trade-related conflicts and protect the interests of customers, he

Shariq Vohra, president of KCCI said the bilateral relationship does not represent existing trade which remains limited to only millions of dollars.

Shortages of building materials prevented the construction sector from completing projects on time and within budget.

Plumbing, electricity and glass suppliers reported difficulties obtaining basic materials as supply lines have been blocked by the pandemic.

The general manager of Active Electrical Suppliers, Kevin Pollock, said it was becoming increasingly difficult to bring in products since the middle of last year.

“The consequences of this delay mean that product installation by trade personnel is also delayed and in some cases alternative products are taken, but this requires additional time and resources to manage as well.

“So this becomes a more complex problem.”

Master Plumbers Association chief executive Greg Wallace said the challenge was the result of a unique set of circumstances combining to create the perfect storm.

“Most of the piped goods come from abroad and there is a gap of three to four months, so that’s a problem.”

The supplier’s decision was exacerbated by an unexpected spike in home renovations as well as severe congestion at Auckland Harbor, Wallace said.

The state will not run out of supplies, but the delay causes headaches for plumbers and gas workers because if they have to replace equipment halfway, it means they have to go back to the board that will ensure compliance. with the building code, he said.

To make matters worse, supply of some products will drop as production in China slows down for the Chinese New Year celebrations in February, Wallace said.

Construction industry expert and partner at business advisory firm BDO, James MacQueen, said it was construction companies that could ultimately pay for the delays.

If there is a delay with work like plumbing – which is one of the first things that go into a project – it will delay all other work that follows, he said.

“If not planned properly this can be a significant problem because most construction projects have very clear timelines and then often, especially large companies, there is damage being liquidated if a building is not completed on time.”

Liquidated damage is the financial penalty a construction company receives for each day the project is delayed.

MacQueen said there was a risk that the ongoing long-term delays could cause some companies to crash, particularly those with projects on their way to similar challenges.

All the suppliers RNZ contacted expected the delays to continue until at least the end of March.

Their advice to customers is to be patient and flexible.


ISLAMABAD: As the gas crisis escalates, the government has further cut supply to the power sector to only 150-155mmcfd from actual demand of 240mmcfd, while supplies of RLNG to CNG, fertilizer, steel industry and power generation -Export industry have been halted.

Reports said another LNG cargo, scheduled for December 28, had been delayed for two more days due to bad weather in the deep sea. And over the two-day period, the country will not be able to put 250mmcfd of RLNG into the system, which will also cause more suffering for domestic consumers and the system will remain under pressure. Previously, LNG cargo from Nigeria which was due on 18 December 2020 was delayed for up to four days.

The situation became uncontrollable due to the government’s failure to manage spot LNG cargoes for the first 20 days of January 2021. In fact, the government had diverted several LNG cargoes, scheduled for the last week of December to the first. Sunday in January to overcome the gas crisis, but in Karachi, captive power plants for general industry were also closed. However, the export industry in Karachi is also starting to experience gas blackouts for 5-9 hours per day or gas supply with low pressure.

Even though all RLNG savings have been transferred to the country, people are forced to buy cooked breakfast from the market because they don’t get gas supplies in their homes. The same situation occurred in Sindh and Balochistan, where gas pressure touched the lowest flow in major cities such as Karachi, Hyderabad and Quetta. In Punjab, residents in many enclaves of the main Punjab cities, Lahore, Rawalpindi, Sialkot, Gujranwala, Faisalabad, Multan and Gujrat do not encounter gas or gas with low pressure. In Peshawar, the situation is also bad in terms of gas availability.

According to Sui Northern officials, RLNG supply to the power sector has been reduced to 155mmcfd for the first 10 days of January and thereafter. If things improve, the gas supply will be increased to the electricity sector. If the temperature drops and the situation gets worse, then in the next 10 days the gas supply to the electric power sector will continue to be cut.

So far, Sui Northern officials claim that the gas company is managing its gas load according to a federal cabinet decision and that if the weather situation worsens, it will close the gas industry for export once a week. At the next ECC meeting, the closing of RLNG for the export industry will also be discussed and the PM Adviser for Trade and Investment is expected to provide a tough time for the Petroleum Division.


Sindh Murtaza Wahab’s Chief Advisor to the Minister of Law and Environment on Monday acknowledged that the transport sector in Karachi is one area where the Sindh government cannot meet its needs.

“I feel regretful when talking about this matter several times. Transportation is one of the areas where we cannot deliver in the way we oblige, ”said Wahab, who is also a spokesman for the Sindh government, while answering questions while speaking at a press conference at the Sindh Assembly. building.

He, however, at the same time also blamed the federal government for the transportation woes in Karachi, saying that despite repeated requests from the provincial government, the Center was not providing the necessary support to help solve the city’s transportation problems.

“I hold moral courage as far as I accept my mistakes because transportation is one of those problems that cannot be solved in the way it should be,” he said. “But at the same time we are asked to understand the reasons underlying this problem.”

Wahab said the federal government, despite repeated reminders from the Sindh government, did not issue sovereignty guarantees for the Karachi Circular Railway (KCR) even though the project had been made part of the China-Pakistan Economic Corridor (CPEC).

He stated that the chief minister of Sindh had sent up to 15 letters to the federal government seeking support for the revival of the KCR, but without success. “Against this background, I have the right to present this aspect of the (transportation) problem to the Pakistani and Karachi masses,” Wahab said, adding that the Sindh government alone could not revive the KCR when the federal government did. does not provide any support in this regard.

The legal adviser commented that such a stance by the federal government shows that it is not at all interested in solving the Karachi issue even though Prime Minister Imran Khan had won a seat from the city in the last general election.

Wahab also regretted that domestic consumers and industry, as well as the provincial transportation sector, were badly affected by the natural gas crisis. Sindh accounts for up to 68 percent of the natural gas produced domestically and the population of the province should not suffer from gas shortages, he said.

Criticizing the federal government’s privatization agenda, he said the Center wanted to privatize the institution because it failed to implement it.

Wahab recalled that the prime minister had promised before coming to power to build five million homes in the country. He added that contrary to that promise, the federal government had destroyed the homes of the poor.

Poor people lost their homes during the current regime, while the prime minister himself seized the opportunity to arrange his own residence after paying only Rs 1.2 million, the legal adviser said.


Karachi Administrator and Commissioner Iftikhar Ali Shallwani said on Sunday that the road carpet in Liaquatabad Area C would be finished in a few hours and stones would also be laid on the paths on both sides of the road.

While visiting the Liaquatabad neighborhood to review work, Shallwani said that Karachi Metropolitan Corporation (KMC) was carrying out work, including road construction and renovation, using its own resources.

Director General of KMC’s Department of Works & Services Shabeeh-ul-Hassan Zaidi, District Chief Technician Najeeb Ahmed and other relevant officials were also present at the occasion. The administrator said that the road sector will be developed according to KMC resources. He said that work on replacing the Shah Faisal bridge expansion joint had also started.

It is important to mention here that the extension connections of the Millennium Mall Bridge and the Liaquatabad Bridge have been replaced, while the connections of all remaining bridges will be replaced if necessary.

Shallwani said that the Karachi Water & Sewerage Board only laid pipes in the Liaquatabad area No. 10 but have not reconstructed it, which caused misery for the community.

He said the road that stretches from Liaquatabad to Golimar and Nazimabad is in a condition not suitable for motorized vehicles to pass because people throw a lot of garbage on the road. He added that the situation took a turn for the worse especially at night, when Karachi saw more traffic. He appealed to the public not to throw garbage on the streets and keep it neat and clean.

Administrators direct DG work & services to paint walkways on both sides and continue to remove distractions from the road to ensure smooth flow of traffic. It also orders using high standard materials for long-lasting results. The newly constructed road will be 1,800 feet long by 30 feet wide.