Comm Ayob said that the suspect left the country since November 2, 2017 and is believed to be currently living in Germany.

“It has become a trend for people to go abroad and make accusations and slanderous statements,” said Comm Ayob.

He said this during a press conference at the Johor Police Headquarters here on Monday (30 November).

Kom Ayob also denied the suspect’s statement claiming that 255 inmates had died in prison from 2000 to 2014 due to police brutality.

“As for Haridas, he was arrested for a fugitive case under Article 506 of the Criminal Code for criminal intimidation. He was later charged in court on November 24 and was offered a bail of RM10,000 which he could not pay.

“Haridas has made a report claiming that he was beaten during detention at the Ulu Choh detention center and not in a police prison,” he said, adding that the suspect must check the facts before making a slanderous statement.

He added that the case is being investigated under Section 500/504 of the Criminal Code for defamation and willful insult and Article 233 of the Communications and Multimedia Act for sharing offensive and threatening content.

In the six-minute and 55-second video, the suspect identifies Comm Ayob as a racist using caricatures and questions his actions to arrest the man suspected of being linked to the Liberation Tigers of Tamil Eelam (LTTE) in 2019 during his time as Head of the Special Branch Counter Terrorism Division (E8 ) Bukit Aman.

iPhone and Android: Which phone runs faster? Watch the video to learn more.

The iPhone and Android confrontation video has rekindled the old debate about which phone works better. Although there are several companies that can choose to buy a smartphone, most companies can run on one of two mobile operating systems: iOS (for iPhone) or Android.

Over the years, both platforms have accumulated their own fans. Although loyal iPhone fans claim that their phones (made by the tech giant Apple) are technologically superior and have better cameras, Android fans are talking about the advantages of their phones, which is to get more features at half the cost of the iPhone And more features, thereby refuting this claim.

Now, videos that are all the rage on Twitter claim to show in real time which phones are faster. The video was originally uploaded to TikTok by the user’@corylewis04′. In the 33-second clip, the iPhone and Android smartphone are placed side by side. The user clicks both buttons at the same time to see which phone application opens faster.

Users can open various applications-from Twitter and Instagram to the very popular mobile game “Between Us”. In almost all cases shown in the video, the application loads faster on Android phones.

The Twitter user who shared the video on the Weibo platform wrote: “Android will always be top-notch.” Incredibly, they use “Twitter for iPhone” to do this-the fact is not unnoticed.

Android will always be excellent pic.twitter.com/osENs3JfbU

The iOS vs Android standoff video has been popular on the Weibo platform, collecting more than 24 million views and thousands of comments, demonstrating the advantages and disadvantages of these two platforms.

Many Apple fans pointed out the superiority of the iPhone camera.

Okay, thank you for showing the speed, but the Android camera pic.twitter.com/hwJHduAk4b

A Twitter user said: “iOS devices are so stable, the animation and scrolling in the app is smoother than Android.”

When you switch from Android to iPhone, you will see the difference. .ios devices are so consistent, and the animation and scrolling within the app is much smoother than androids and androids, you will always notice that the frames in the app are missing or in the ui

Android fans are eager to defend their phones, pointing out the many disadvantages of owning an iPhone

It’s really interesting to watch iPhone users get excited about the update after receiving something from Android for years. pic.twitter.com/liNvp4dBD7

“You will see the difference.”

Yeah, I did:
1. Expensive cables that I don’t need
2. The setting is too complicated.
3. Not much can be customized.
4. There is no file browser like WTF.
5. The IPA software package cannot be easily installed from the mobile phone.
6. Where is the headphone jack.
7. No

At least with android you will get a charger

What is your position on this debate? Use the comments section to let us know.


The same is true for this replica, although it certainly belongs to all Bugatti standards, let alone a fictional version of the visual game. But this is still impressive.

There is a saying in the entertainment circle: “If not, please fake it,” With more elegant siblings “Fake it until it is manufactured.” None of them apply to supercars for very simple reasons: absolutely no one can replicate the quality, materials and performance of millions of cars in their homes or garages.

However, this mechanism is very close. In certain aspects. His name is Jack Lee. Fleet). For the past three months or so, he has been working on his own replica of the Bugatti Vision Gran Turismo, which he built from scratch in the same garage where the truck was repaired. There is no news about the exact location of the garage, but there is the United States under “Location” on Lee’s YouTube page.

“When I was a kid, I dreamed of making a Bugatti sports car”, Li said. “It’s time to realize our dream.”

So he and the team set out to work, first creating a custom tube-and-frame chassis to accommodate the engine that looked like a V8 crate engine. Everything on the copy was done manually, as shown in the two videos at the bottom of the page.

However, unlike the original Vision, there is no carbon fiber on the body: the entire car is made of welded metal plates, which in itself is an impressive feat-even if only aesthetically. All these metals undoubtedly increase the weight of the car, but we feel that this replica is more like appearance than comparable performance, because in this regard, it has no chance to make a real deal.

The replica is painted in two shades of blue, similar to those used for Vision. At least in these videos, the completed project looks like it deceived most people on the street to make them a legitimate Bugatti, and those who will not be fooled will certainly still appreciate the skill of making it.

Speaking of actual transactions, Vision Gran Turismo It was initially sold to the Prince of Saudi Arabia for US$5 million, and then sold to Hezy Shaked for US$5.6 million in 2017.

Trucks Hit Helicopters in Brazil Viral As Punjab, India Peak
We use cookies for analytics, advertising, and to improve our site. You agree to our use of cookies by continuing to use our site. To find out more, see Cookie Policy and Cookie Settings.Well

Our website is made possible by displaying online advertisements to our visitors.
Please consider supporting us by disabling your ad blocker. Please reload after the ad blocker has been deactivated.

Express Tribune analyzed the strange claim, it turned out that the claim was wrong. Creebrab: TWITTER

Indian media claim that Pakistan is behind grasshopper attack which has been swept country.

The Express Tribune analyze the claim and consider it wrong.

Arnab Goswami, anchor on Indian news channels Republican TV, making strange accusations in the air alleging that grasshoppers were sent from across the border as a plan to “destroy the country’s agriculture and reverse the economy”.

Goswami then claimed that grasshoppers would target the Pakistani army.

Indian news outlet The Economic Times, Also includes stories that investigate how that might be.

The article went further to warn New Delhi not to let “guard it first” to quote CIA files that were declassified from the Cold War where animals were used to photograph sensitive sites on the former USSR.

“Because the CIA also trains crows and dolphins, Pakistani grasshoppers must also be examined more closely,” the report said. 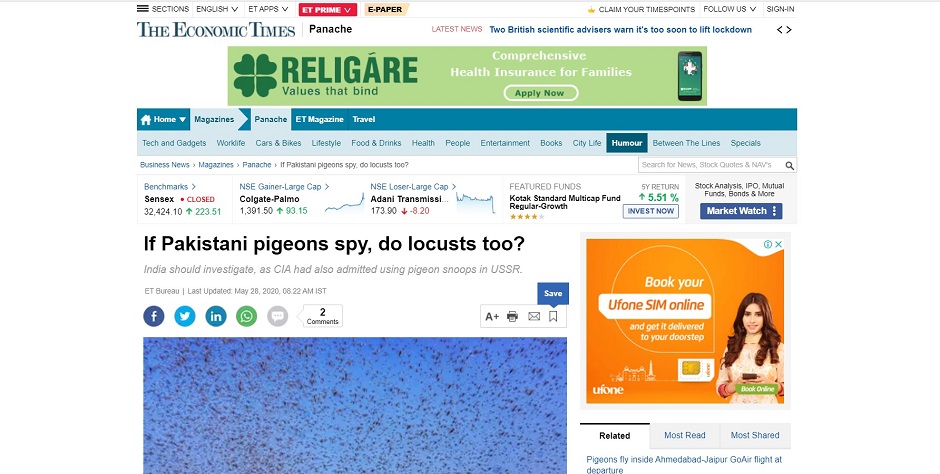 These insects, especially those from the desert, eat anything from bark to seeds and flowers while traveling at speeds of 93.2 miles (149 kilometers) a day.

After destroying crops in the states of Rajasthan, Gujarat and Maharashtra in western India, locusts headed for the national capital of Delhi in large numbers.

Indian police also released a dove belonging to a Pakistani fisherman after an investigation found that the bird, which flew across contested borders between nuclear-armed states, was not a spy. 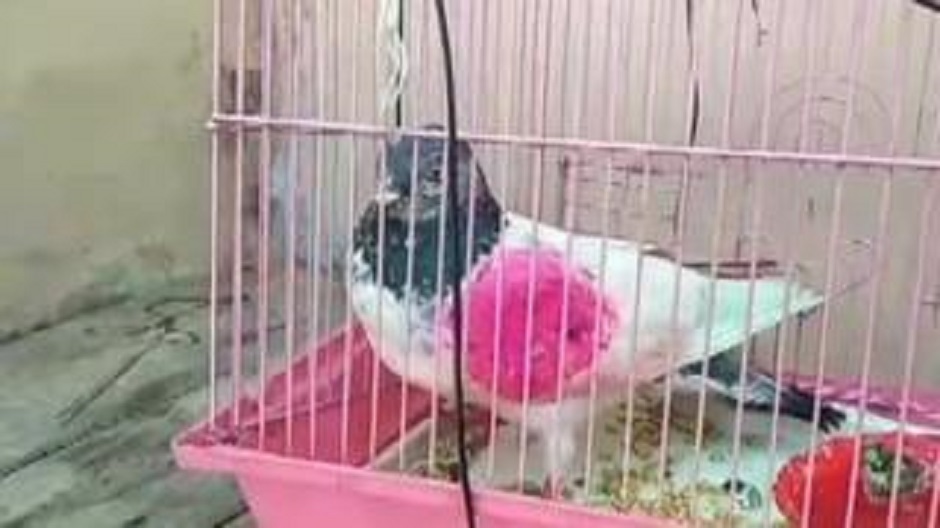 “Merpati was released yesterday (May 28) after nothing suspicious was found,” said Shailendra Mishra, a senior police official in Indian-occupied Kashmir.

It is unclear where the bird was released and whether it flew back to its owner.

The owner of the Pakistani dove has urged India to return the bird, which the villagers turned over to the police after it was found.