The World Health Organization has not only covered up Beijing’s lies and its refusal to allow an outside investigation into how COVID-19 started – it also lied about the outbreak at its global headquarters in Geneva, Switzerland.

They repeatedly issued public statements denying transmission of the virus at headquarters – until the Associated Press received emails indicating that at least 65 staff had been infected this year.

Yes, half the cases were people who did not come to the office, but 32 people were working on site at headquarters when they tested positive. And most of the cases (49) came in the last two months, because the virus has spread in the surrounding cities.

Indeed, Geneva is facing a massive surge, with more than 12,000 cases reported in the past two weeks, but the WHO refuses to admit that the contagion occurred at its headquarters, which would make the building practically the city’s only virus-free zone.

The e-mail addressed concerns that five more workers had tested positive the previous week – and others they had close contact with were still in the office. All five (one, reportedly a senior infection control specialist) have all had mutual contact, so that the outbreak qualifies as a group (two or more positive cases in the same area).

But the agency is in deep denial when it refuses to label COVID-19 as a pandemic until mid-March. Its leaders expect you to believe that the 32 workers in the building were infected without passing it on to other staff.

Overall, it doesn’t look great for an outfit struggling to pretend not to be completely careless since the start of the pandemic.


Europe enjoyed a drop in infection rates which are now spiking again as WHO’s David Nabarro warned of a third wave.

The World Health Organization’s (WHO) special envoy for COVID-19 predicts a third wave of the pandemic in Europe in early 2021 if the government repeats what he says is a failure to do what is needed to prevent a second wave of infections.

“They lagged behind building the necessary infrastructure during the summer months, after they took control of the first wave,” said David Nabarro of WHO in an interview with a Swiss newspaper.

“Now we have the second wave. If they don’t build the necessary infrastructure, we will have a third wave early next year, ”said Nabarro, a Briton who campaigned for failure to become WHO director-general in 2017.

Europe enjoyed a fall in infection rates that have now spiked again: Germany and France on Saturday saw a 33,000 increase in cases, Switzerland and Austria had thousands of cases each day, while Turkey reported a record 5,532 new infections.

Nabarro opted for the Swiss move to allow skiing – with the required masks in the gondola – as other Alpine nations such as Austria closed resorts, saying Switzerland could achieve “very high disease and death rates”.

“Once the infection rate drops, and they will go down, then we can be free as we wish,” Nabarro said as quoted by Solothurner Zeitung. “But now? Should ski resorts open? Under what conditions? “

Nabarro praised the response of Asian countries like South Korea, where transmission is now relatively low: “People are fully engaged, they are taking on behaviors that complicate the virus. They maintain their distance, wear masks, isolate when sick, wash their hands and surfaces. They protect the groups that are most threatened. “

Nabarro also said Asia had not relaxed restrictions too early.

“You have to wait until the number of cases decreases and remains low,” he said. The European reaction is incomplete.

Johnson is also expected to announce a return to regional restrictions as statistics show coronavirus infections have stabilized.

His office said late Saturday that the government plans to return to using the UK’s three-tier system of local restrictions, with regions facing different lockdown measures based on the severity of their outbreaks. More communities are expected to be placed in the two highest virus alert categories, he said.

The prime minister’s office also confirmed plans to start a nationwide COVID-19 vaccination program next month – assuming regulators approve a vaccine against the virus – as well as increased mass testing in an effort to suppress the virus until a vaccine can be launched.

South Australia on Wednesday announced a six-day “circuit breaker” lockdown for the state’s nearly two million people, as it moved to contain a sudden spike in coronavirus cases that ended months with almost no infections.

A series of broad restrictions will be put in place from midnight to allow “breathing room” for contact tracing, South Australian state Prime Minister Steven Marshall said, after 22 cases of the virus were reported in Adelaide, the state capital.

“We need this circuit breaker, this community pause,” he said. “It’s about South Australia taking a break to keep us ahead of the virus,” he said.

“We tried hard and we left early. Time is very important and we must act fast and decisively. “

Chief Public Health Officer Nicola Spurrier noted that certain strains involved in the latest outbreak have “a very, very short incubation period,” and can take only 24 hours or less for an exposed person to become infectious.

He said the action would give the country 1.8 million people time to stop the chain of transmission.

The new rules will take effect at midnight and require all schools, restaurants and factories to close.

Stay-at-home orders will be issued to statewide residents, with only one person from each household allowed to go out each day for essential purposes.

Anyone leaving the house must wear a mask.

Residential homes for the elderly and disabled will be closed and all weddings and funerals suspended.

The latest outbreak relates to an Australian arriving in the state capital Adelaide from overseas on November 2 and entering mandatory hotel quarantine. A cleaner is believed to have contracted the virus after touching a contaminated surface and two security guards at the facility were also diagnosed with the virus.

Two new cases related to the cluster were announced on Wednesday, bringing the state’s total cases since the pandemic started to 551. There are fears the latest outbreak could potentially infect high-risk populations, with care workers and prison guards among the tests. positive.

The announcement sparked long queues at COVID-19 testing centers and rushes to supermarkets where toilet paper quickly sold out.

This is the line for the register. Missing toilet paper. Tissue, meat, eggs are running low. @ 9ewsel @ 9NewsUS pic.twitter.com/m5Wm6TbwhI

Elsewhere in Australia, the state of Victoria, which was the epicenter of nearly 28,000 cases in the country as of last month and where people in Melbourne experienced weeks of lockdowns and tight curfews, marked the 19th straight day without report a new case.

Other states in Australia have imposed new quarantine rules on anyone traveling from South Australia as a result of the outbreak in that state.


The World Health Organization is working on a coronavirus cluster at its headquarters in Geneva, Switzerland – with the top infection control specialists in the global body among those who have tested positive.

An email Friday to staff obtained by the Associated Press said that five WHO employees, four on the same team, recently contracted the virus – bringing the total number of agency workers who have tested positive to 65 since the start of the pandemic, 49 of them in eight. the last week.

Although e-mail does not refer to new cases as clusters, two or more cases in the same area are usually classified as such.

About half of the infected staff work from home, but 32 have worked outside the headquarters in Geneva.

One of the workers affected is an infection control specialist on the leadership team of the director general, a staffer told the news service.

The outbreak demonstrates that infection control and social distancing measures are failing at an agency tasked with overseeing the spread of the pandemic and steps to develop a vaccine.

For example, a senior manager at the WHO reportedly held several in-person meetings earlier this month before testing positive for the coronavirus.

In an email Friday, Raul Thomas, WHO’s head of business operations, told employees that steps to “reduce our risk profile” are now being considered.

“Finally, members of the workforce are reminded that physical gatherings, including meetings in public areas or cafeterias, are strictly discouraged and should only be held where absolutely necessary,” Thomas wrote.

The agency last month restricted access to Geneva facilities to key staff and senior officials as a precaution against the virus, and reminded workers to wear masks, practice social distancing, and “always maintain proper hand hygiene.”

About 2,400 people typically work in the seven-story headquarters building in the Swiss city, although many were assigned to work from home during the pandemic, which has surged again in Europe and the US in recent weeks.


The former New Zealand prime minister who is investigating China’s response to the Covid outbreak is at odds over his relationship with TV anchor friend Meghan Markle.

By Jonathan Bucks For The Mail On Sundays

The woman appointed by World Health Organization investigate Chinaresponse to corona virus The outbreak is facing calls to resign because of its close ties to Beijing.

Former New Zealand Prime Minister Helen Clark will co-chair the Independent Panel for Pandemic Preparedness and Response, which will examine allegations that China failed to alert the world of the looming Covid-19 disaster.

But human rights groups fear that Ms Clark’s relationship to China – specifically her friendship with TV presenter James Chau, a friend of hers Duchess of Sussex – can ‘seriously damage’ the panel’s credibility. Chau’s role as a WHO ambassador is under investigation after he was accused of spreading Beijing propaganda.

Human rights groups are concerned that Ms Clark’s relationship to China – particularly her friendship with TV presenter James Chau, a friend of the Duchess of Sussex (group photo) – could “seriously damage” the panel’s credibility. 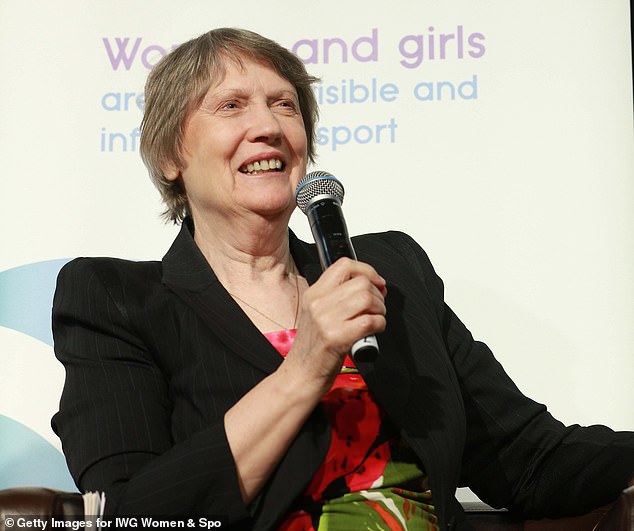 Former New Zealand Prime Minister Helen Clark (pictured) will co-chair the Independent Panel for Pandemic Preparedness and Response, which will examine allegations that China failed to alert the world of the looming Covid-19 disaster.

In a letter to Ms Clark, Hillel Neuer, executive director of the human rights group UN Watch, said: ‘We respectfully ask you to step down as co-chair of the WHO investigation.

“Your close relationship with the Chinese government creates an impression of bias which, under international law, is reason to reject.”

Earlier this year, Mr Chau posted a selfie with Ms Clark on Twitter wishing him a happy 70th birthday.

Mr Chau, 42, is being investigated by the WHO after presenting programs on state-controlled China Central TV in 2013 including a confession by Peter Humphrey, a British corporate investigator working in China. Mr Humphrey claims it is obtained under pressure.

Mr Chau and the Duchess have been pictured holding hands at well-known charities such as the One Young World Summit in 2016. Meghan describes him as a ‘smart and charming man’. 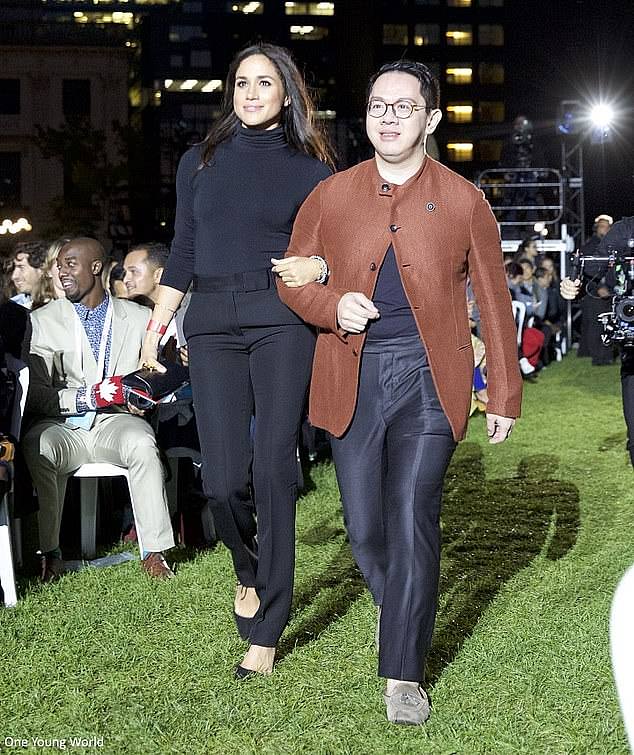 Mr Chau, 42, is being investigated by the WHO after presenting programs on state-controlled China Central TV in 2013 including a confession by Peter Humphrey, a British corporate investigator working in China. Photo: Mr Chau and the Duchess

Ms Clark has been a guest on Mr Chau’s YouTube program The China Current – which is funded by the China-US Exchange Foundation, an organization with close ties to the communist regime.

In one appearance, Ms Clark criticized the international community’s’ flat response ‘to Covid-19, but added:’ Let’s exclude the World Health Organization … [which] has actually tried to provide global leadership. ‘

Critics accuse the WHO of ‘colluding’ with China to hide the extent of the initial outbreak.

Ms Clark, WHO and Mr Chau did not respond to requests for comment.