[VIDEO] LEGO Super Mario Has an LCD Screen and Speaker Sound; How much and where to buy? ( Screenshot of: Nintendo UK Youtube Page )

LEGO Super Mario now official and will arrive on the market later this year! If you think that the best toy crossover hasn’t happened yet, think again. The famous LEGO the group is now partnering with the Nintendo company to make their latest LEGO Super Mario set.

Official! Super Mario LEGO soon in store; But how much is it?

If you have been a player who loved Super Mario adventures before or now, and also had fun with the LEGO set, then the latest product from the children’s toy company based in Denmark may have become an instant hit for you.

According to a press release from the LEGO group, their Super Mario LEGO set will be released in the store in August this year. However, if you can’t wait that long and don’t want to waste your time waiting for this line, customers can also pre-order the LEGO Super Mario Adventures Mario Starter Course on the LEGO website and from certain retailers around the world.

“We are very excited to bring Mario to the physical world through interactive and social LEGO games,” the word Julia Goldin, Chief Marketing Officer and EVP of the LEGO Group. “With this experience, we will help millions of children with love for Mario to engage and play in a completely new way, where they control making and playing games with their favorite characters. By combining the latest digital technology, LEGO Super with seamless Mario is a very social, interactive, and collaborative experience for children. “

Meanwhile, for Nintendo, “The new product we created together with the LEGO Group seeks to combine two different styles of play – one where you freely build the world of Mario and the other where you play with Mario in the world you have created,” the word Takashi Tezuka, Executive Officer and Game Producer of Nintendo Co., Ltd.

What does the Mario Super LEGO set look like? 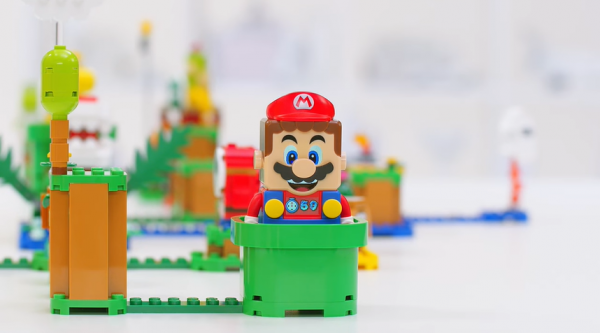 (Photo: Screenshot of: Nintendo UK Youtube Page)
[VIDEO] LEGO Super Mario Has an LCD Screen and Sound; How much and where to buy?

The Super Mario version will of course feature the same beam-like characteristics that have become iconic images of children’s adventure games – as well as all video games of its time.

Unlike ordinary LEGO sets, however, Mario LEGO figures themselves will have an LCD screen as their eyes, mouth and stomach to be able to display various instant reactions to the movements, colors, and bricks of his actions. Also included in the set are speakers that play the iconic Super Mario sound effects and music from video games.

As the children’s toy company also explains, “fans will be able to start exploring the joyous LEGO Super Mario universe with Adventure with Mario’s Beginner Course. This entry point is set into the world of LEGO Super Mario is needed to unlock the expansion set and features of the seven stones action bricks for different interactions with LEGO Mario characters who are only included in this set. “

So how much is it?