The federal prison in Oakdale, La., Described in 2006, is grappling with a series of COVID-19 cases. 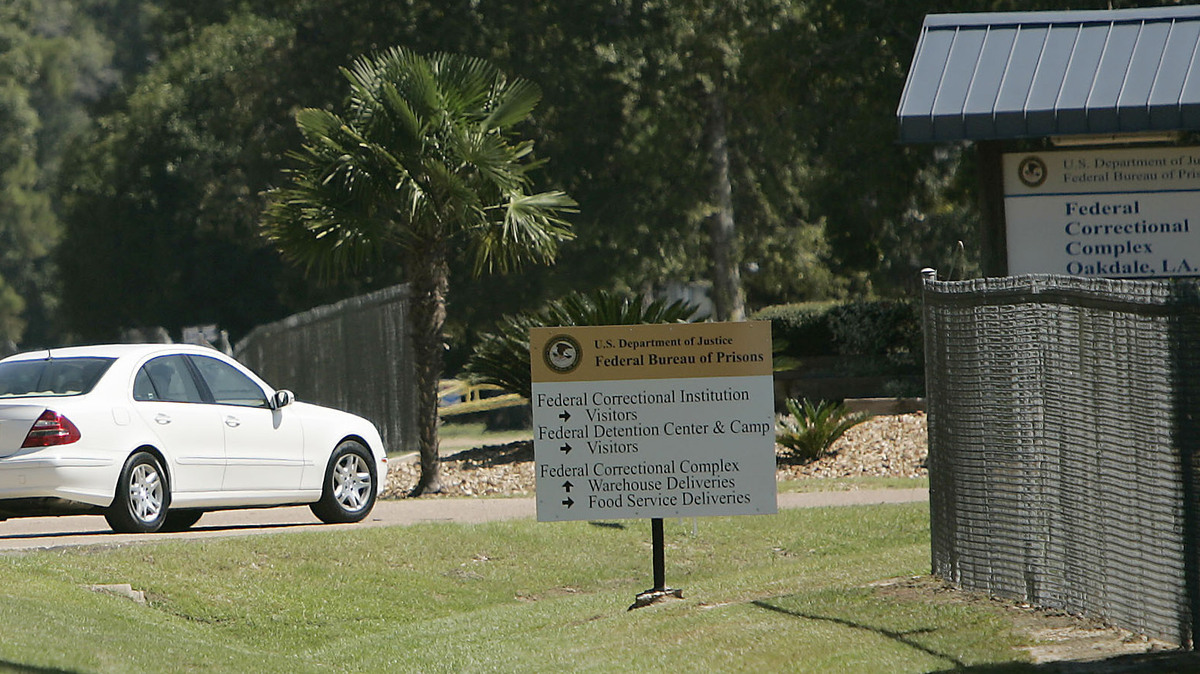 The federal prison in Oakdale, La., Described in 2006, is grappling with a series of COVID-19 cases.

Federal prisons are grappling with the rapid spread of the corona virus in more than two dozen facilities across the country in an outbreak that has claimed the lives of at least seven prisoners and infected more than 140 and nearly 60 staff.

One of the hardest hit so far is the Federal Penitentiary Complex in Oakdale, La., Which is located about three hours drive west of New Orleans. It is home to two low-security prisons and minimum security camps, all of which alert around 2,000 inmates.

“They are all really scared,” said Arjeane Thompson, whose girlfriend, Brandon Livas, is an inmate at Oakdale camp. “They feel like they’re sitting ducks, really just kind of waiting to be infected because it’s out of control there pretty fast.”

Their worries are reasonable. Five prisoners have died in Oakdale. Another 22 tested positive, as did four staff, according to the federal Prison Bureau.

While devastated, Oakdale was not the only federal correctional facility to fight with the virus. Nearly 30 facilities in the bureau system have confirmed cases between prisoners and staff.

The widespread reach of the virus has prompted the Prison Bureau, which operates 122 federal correctional facilities nationally, to implement 14-day lockouts to try to slow down the spread.

For many prisoners, locking means most are confined in their cells to try to maximize social distance, as much as possible in confinement.

But for Livas and 140 others at his facility in Oakdale, there were no cells. Inmates sleep in two barracks-style buildings in a bunk bed about 3 feet away.

“They did nothing to isolate anyone here! At all! People still cough every night, man!” Livas notified NPR via email. “There are a lot of sick people in this camp! I pray that something happens soon!”

Livas had an old mask that he had saved from the cleaning work he did when he first arrived at Oakdale, according to Thompson, so he had slept in it to try to protect himself. He also tried to sit outside in the daytime as much as possible because “it’s the only way to get away from people, sort of,” he said.

Livas said he has diabetes and has acute pancreatitis – a chronic health condition that can make him very vulnerable to COVID-19. That only added to his fears and Thompson.

Carla Lunceford is in the same situation. He was worried about his son, Donald Fugitt, who was an inmate in another part of Oakdale.

“She’s worried and I’m worried because Donald has a birth defect,” he said. “One of his lungs is smaller than the other. He has some asthma problems from that.”

He said he peppered him with questions about what precautions were taken to protect him and other prisoners.

He had told him that he was afraid of catching the virus from the guards, which revolved among all parts of the Oakdale complex.

“I asked him, were they wearing gloves or masks? And he said that you might see CO with a mask for a few hours and then you would see it later and they didn’t use it anymore,” Lunceford said, referring to the correctional officer or guard.

Until March 29 – the day after the first Oakdale inmate died because of COVID-19 – Fugitt and about 30 other inmates were still allowed to gather together in a public area on their part of the prison.

“He said everyone touched everything,” Lunceford said. “And I asked him, ‘Do you all have classes about it? Did they come out and talk to you about what to do, what not to do? What can help protect yourself?’ And he said, “No.”

Because the number of victims of the virus has increased, the Department of Justice has taken a series of steps to try to ease the burden on the system.

The latest came last Friday, when Attorney General William Barr ordered the Prison Bureau to move more prisoners to solitary confinement and accelerate the release of high-risk prisoners – especially in Oakdale and two other facilities which were hit.

That gave some inmates a glimmer of hope, including Livas and Fugitt, to get out of Oakdale and, hopefully, the reach of the virus.

But the prisoners were not the only ones in Oakdale who struggled with fears of infection. The prison staff are also scared now.

Ronald Morris is a maintenance worker in Oakdale and president of one of the local prison union workers.

“We are the pandemic center for the bureau,” Morris said. “This virus does not distinguish people. It doesn’t matter whether you are a staff member or an inmate. And that is the dangerous nature of what we face.”

According to union calculations, Oakdale was even worse hit by the bureau statistics.

The level of anxiety and fear increases every day.

Morris said that on Monday, 26 detainees tested positive, including five who died. Six are in intensive care, four of which use ventilators.

On the staff side, Morris said there were 21 confirmed cases – including one person who had been hospitalized – and 17 others were awaiting test results.

“The level of anxiety and fear increases every day,” he said. “We have just seen what is happening and hearing what is happening with more and more staff coming out makes it a tremendous pressure just to come to work and show up and do your job.”

Overall, the situation has made Oakdale staff tense.

“Some work double every day. Some work 12-hour shifts. Some work up to 40 consecutive hours,” Morris said.

He is no exception. He spoke to NPR one night from the hospital, where he filled in for a colleague until midnight, before turning to work again the next morning at 6 am.

Morris said he believed he had been infected with a virus; he estimates that 80% of prison staff have. Some employees stopped coming to work because of concerns about their safety, he said.

Morris said his biggest fear was to catch COVID-19 and bring it home to his wife and three children.

To prevent this, he said, every day when he returned he took off his boots outside and sprayed them with Lysol. He got clothes in the utility room and threw his clothes directly into the washing machine, which his wife immediately turned on. He then ran straight to the bathroom to clean.

But he also worried about the possibility of bringing the virus to his community – a fear that seemed to be requited.

Morris tells the story of walking into a local dollar store in a prison uniform at a recent lunch break to buy reading glasses to replace a broken one.

When he reached the cashier to pay, he said, the cashier withdrew from the checkout hall and called him from a cashier in one of the aisles.

“When I swipe my card and I kind of laugh at myself and I say, ‘Damn, even they know it’s not good to be around us,'” Morris said. “That’s funny, but actually it’s not, you know, because it’s really that bad out there and people know it.”